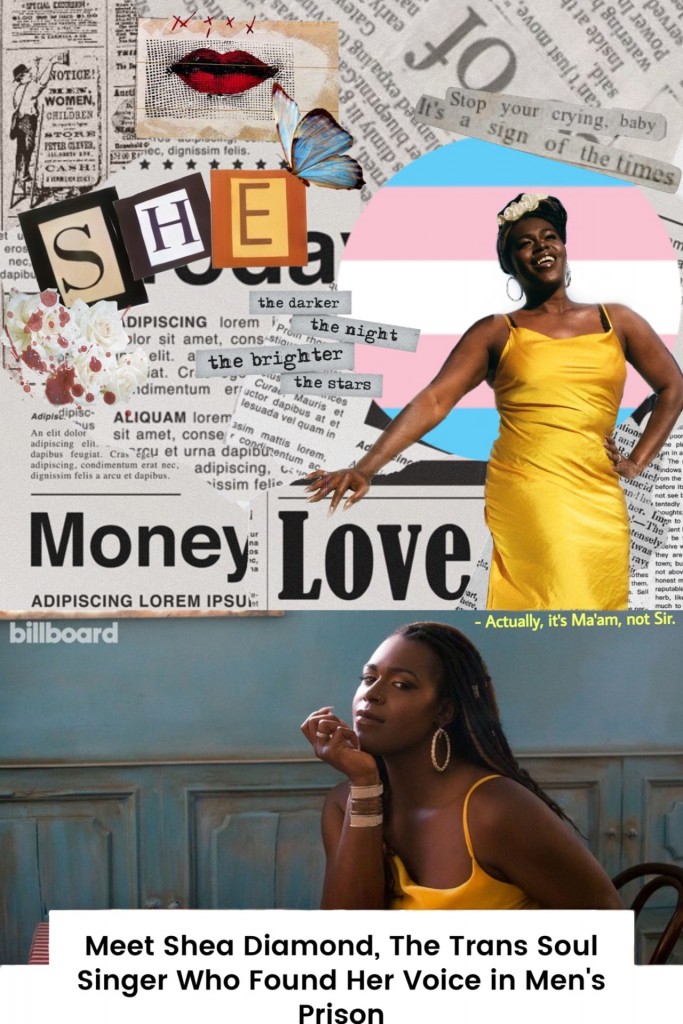 At first glance, the image appears to be the desktop screen of a ’90s personal computer — with floating windows and a hovering, pixelated cursor. But a closer look reveals a media widget playing the song “we fell in love in october,” by indie singer-songwriter girl in red, and Pride mantras such as “Love knows no gender” splashed among images of queer icons Ruby Rose, Hayley Kiyoko and Kehlani in the ’90s mockup of the software Microsoft Paint.

This is one of the many bold and colorful collages made by CSUN students in Queer Studies 204: Queer Identity – Pop Music and Its Audience, 1980s to Now. The course’s final project for spring 2020 was to create digital zines — self-published collections of externally sourced text and images — and song playlists to inspire LGBTQ+ youth around the San Fernando Valley and beyond to love and accept themselves, especially during these unprecedented times.

“If I had found something like the zines and the playlists we made when I was younger, when I was in the closet, struggling with my own identity, it would have definitely helped me to feel less alone in the world,” said Jade Edwards, a student in the class. “I’m glad we could make [this project] now, and help whoever is in young me’s shoes with coming out and accepting themselves.” 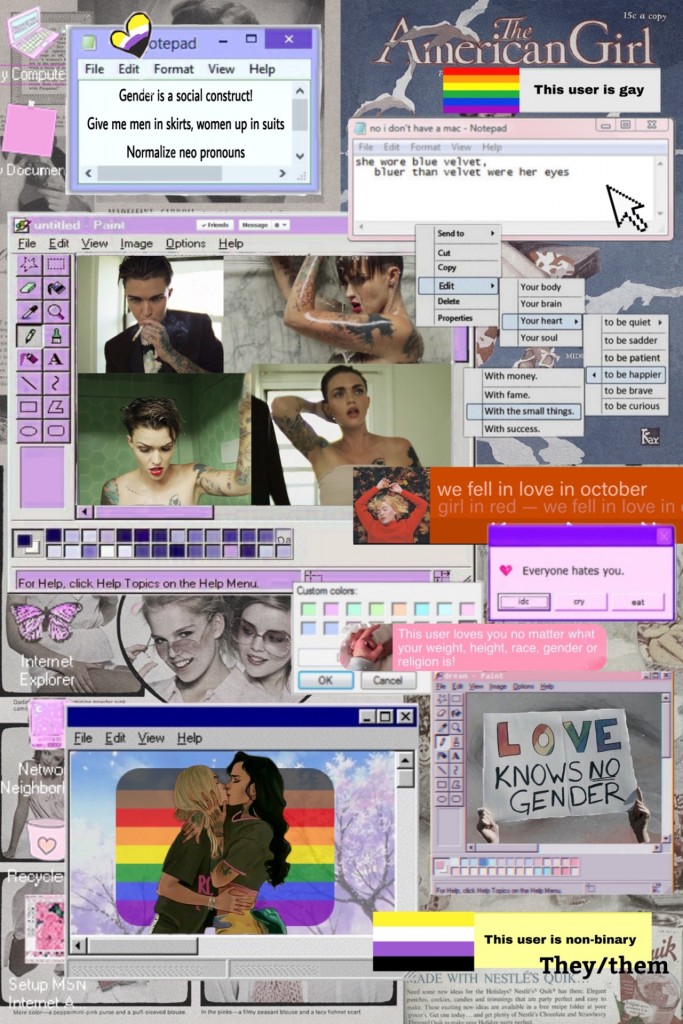 Collage from “Zine 3” in the CSUN Queer Studies project.

The work of professor Matthew Clements’ queer studies class already has touched thousands with its message. During Pride Month in June this year, the anthology of zines and playlists was featured on the website of the annual Valley Pride event, which went virtual this year in light of the COVID-19 pandemic. The virtual celebration drew nearly 18,000 views in the first week of its release alone, according to Andrea Miller, Valley Pride’s event producer.

Clements said the digital platform can create an invaluable safe space. Creating such spaces for LGBTQ+ youth — even on Zoom or with classmates online — is especially crucial during stay-at-home orders, he said.

“Students in my [freshman writing] class who were doing their monologues about their [LGBTQ+] experiences were going into the bathroom, running the water and locking the door, then trying to do the monologue into their phone on Zoom, without their parents hearing them,” he said. “That situation with family scorn or a family’s lack of acceptance — it’s still happening.”

In generating the project, Clements was inspired by the zines created by queer musicians in the 1980s — the very people who began the queer pop music movement in the U.S. and Canada — whom his students were studying in class. 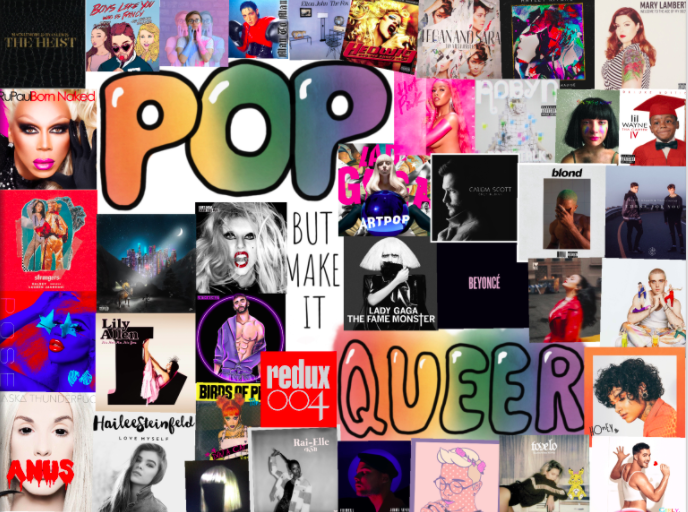 “Back in the day, a number of those musicians weren’t confident that their music alone was going to be reaching enough of an audience in the way that they wanted it to, which was to support and normalize various queer and gender identities,” Clements said. “So what did they do? They decided they would create zines with the classic, old-style Xerox machine.”

“Usually, [zines] would be sold at art shows or punk shows — places where people are coming together,” said Kyla Fritsinger, another student in Clements’ class. “And when you pick up a zine, you see the work, a lot of the time, of multiple people, and you see stories that you otherwise wouldn’t see. … Zines themselves represented a community of people who came together to create them. And that’s exactly what we did here.”

The class, made up of LGBTQ+ students and allies, formed eight groups with four to five members each to create eight different digital zines in the form of Tumblr pages or virtual flip books. Students split the work and conceptualized their own pieces and artworks.

“My group seemed very passionate about the idea of self love,” Fritsinger said. “So, in context, we all were able to come together and give our own perspectives on that.”

Fritsinger, who has a background in art, used a tablet to stitch together handpicked images — from unabashed queer punk musicians rocking out on stage to sticker-like graphics featuring bold statements — taken from the internet to craft what she called “old school” collages. 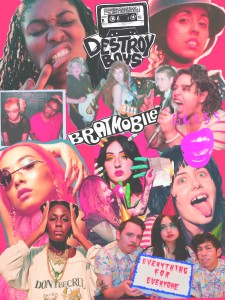 Collage by Kyla Fritsinger from “Zine 8” in the CSUN Queer Studies project.

“I wanted [to find] images that people would see and remember, whether it’s the Penny Lane kids, or just whoever was on the Valley Pride website,” she said, noting the youth who are involved with programming at the Penny Lane Centers, a San Fernando Valley nonprofit dedicated to the wellbeing and mental health of children and youth. “That was my thought process when it came to choosing the images.”

Along with the zines, each group curated tracks for their own Spotify playlists. Fritsinger said building the playlists was deeply personal, as music can serve as a meaningful form of escape for queer youth to find inspiration and support.

Some groups selected their tracks as a collective unit, while others, such as Edwards’ and Fritsinger’s groups, had each student build their own mini-playlist to add variety to the combined final product.

“We wanted to make sure we got the whole spectrum of every type of music, every type of artist and every type of experience,” Edwards said, “so that anyone who listens to it can find a song or multiple songs that they resonate with.” 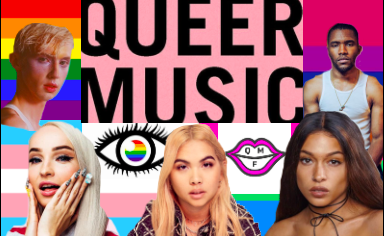 Collage from “Zine 2” in the CSUN Queer Studies project.

Since its completion, the project has helped LGBTQ+ youth supported by organizations such as the Penny Lane Centers, the Los Angeles LGBT Center, CSUN’s Strength United, and The Lesbian, Gay, Bisexual and Transgender Community Center in New York City. These organizations, Clements said, have been sharing the webpage as an online resource for entertainment and for creating safe spaces in their youth programs.

The idea for the project came as Clements sought an online alternative this year to his regular service learning class assignments, which previously have included the curation of titles for a queer library in L.A. County jails, in collaboration with the LAPD; an outreach project with a social service agency that supports Hispanic parents with LGBTQ+ children; a social mixer with local high school Gay-Straight Alliances (GSAs) and community colleges around the San Fernando Valley; and generating curriculum suggestions for the LAUSD, including sexual education relating to LGBTQ+ identities.

CSUN’s groundbreaking Queer Studies Program in the College of Humanities began offering classes in fall 2008, when it became one of the first programs in the nation to carry the name “queer studies.”

“No matter your race, socioeconomic class or identity, you were included in what we made,” Edwards said of the zines project, “and hopefully you could find something that you resonated with. … We wanted to make sure everyone felt included, that no one was left behind.”

The zines and playlists can be viewed on the Valley Pride 2020 webpage here.