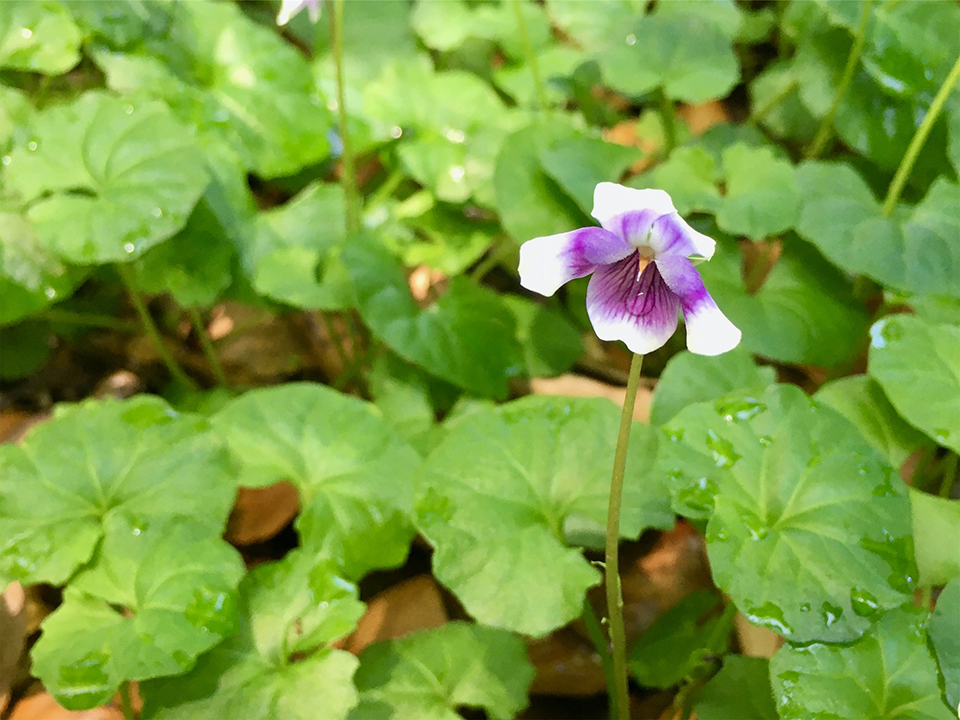 A violet is a zygomorphic flower. CSUN biology professor Jeremy Yoder has found that its shape can influence the pollinators it attracts. Photo courtesy of Jeremy Yoder.

A flower’s shape influences the number of pollinator species it attracts, which has implications for the history of flowering plants’ diversity as well as their future risks of extinction due to pollinator loss, according to a new study by California State University, Northridge assistant professor of biology Jeremy Yoder.

Flowers with bilateral symmetry — when one side of the flower mirrors the other side and can only be bisected into two halves along one plane, such as an orchid or a sweetpea — attract a more select group of pollinator species, whether hummingbirds, bees or other insects, Yoder said.

The results of his study, “Zygomorphic flowers have fewer potential pollinator species,” were recently published in the journal Biology Letters. His co-authors include then-CSUN undergraduate biology student Giancarlo Gomez, now a graduate student at CSUN, and Colin J. Carlson, a an assistant research professor of at Georgetown University.

Yoder said botanists have understood for centuries that bilaterally symmetrical flowers had more specialized pollination interactions than their counterparts, radially symmetrical flowers. Called by botanists “actinomorphic,” these flowers — such as roses, daisies or tulips — can be bisected into two same halves on more than one plane. While zygomorphic flowers influence pollinator behavior and can discourage less-effective pollinators from visiting them, actinomorphic flowers are not so selective.

“But no one has ever studied whether flowers’ symmetry can impact the actual number of pollinator species that visit them,” Yoder said.

Yoder, Gomez and Carlson pulled existing records on more than 53,000 floral visitations by pollinators to some 2,700 flowering plant species in 159 communities around the world. They then painstakingly classified the flower symmetry of each plant.

Yoder and his team narrowed their search to examine what happened when actinomorphic and zygomorphic flowers shared the same space. They wanted to see if the two types of flowering plants could share the same pollinators.

“What we found was that zygomorphic species tended to have fewer species of pollinators visiting them, even though they are existing in the same environment and nothing externally is keeping the pollinators from visiting them,” Yoder said.

Yoder said their findings provide new insight into how flowering plants have evolved, since that evolution is impacted by how those plants interact with pollinators.

Their results also have important implications for conservation, he said. If a species of plant with zygomorphic flowers has fewer pollinator species, it may be at greater risk for extinction if something happens to one of those pollinators.

“Our findings raise a lot of questions, and clearly indicate there is still is a lot to do when it comes understanding the evolution and future of flowering plants,” Yoder said.

“When we’re talking about pollinators, we’re using a broad definition of pollinators. Whether it’s a hummingbird or an insect — anything that is attracted to the nectar of a flowering plant — the biology of the plant, its anatomy or physical structure, will determine whether that pollinator is successful in its goal,” he continued. “That goal, in the environmental world, is beyond getting nectar from the plant. It’s about helping with pollination. And if that doesn’t happen, then that can be a sign of trouble for that plant species’ future.”