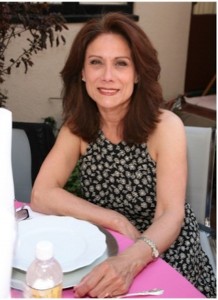 The late professor of Chicano/a studies and “Grease” actress Annette Cardona was honored with an intersection naming in her native Cypress Park. Photo courtesy of Renee Moreno.

Annette Cardona — the “Grease” actress known for her role as Cha Cha DiGregorio — has been honored with an intersection naming that recognizes her role as an educator and actress.

On June 28, ​​the City of Los Angeles dedicated the intersection between Avenue 26 and Jeffries Avenue in Cypress Park to the late actress and CSUN professor of Chicana/o studies in her childhood neighborhood.

“Annette Cardona Charles Square” honors her role as a minority in the entertainment industry during a time when there wasn’t much representation, and recognizes her impact on the community.

“It’s recognition that she definitely deserves — it’s a great honor that people will remember her in that way,” said Renee Moreno, a close friend and professor of Chicana/o studies at CSUN. “She blazed the trail for so many people who came after her, and for people who will keep coming.”

Cardona was born and raised in Los Angeles, beginning her career in the industry as a dancer and later transitioning to acting. By age 21, she had already performed on Broadway alongside stars such as Katharine Hepburn, and later worked with legends such as Anthony Quinn and Tennessee Williams.

Through her career, Cardona’s talent was highly praised, earning her an invitation to perform at the White House for President Ronald Reagan.

In 2002, she joined CSUN as a lecturer in the Department of Chicana/o Studies, teaching public speaking and interpersonal communication. Thanks to her background in theater, Cardona made her classes unique by incorporating dance and physical workouts.

“I find people are so afraid to speak. We’re taught in theater how to get rid of those fears,” Cardona told The Sundial in a 2010 interview.

Her theater training also played a key role in her involvement with the McNair Scholars Program, designed to prepare undergraduate students for doctoral studies. The final step of the program requires students to present their research at UC Berkeley, and Cardona was tasked with preparing the students for their presentations, Moreno said. Cardona spent a month training the scholars to memorize their entire paper for performance. After their presentations, every member of the program’s board of directors congratulated Moreno and CSUN on the high caliber of the scholars’ presentations, she said.

Cardona was well loved in the classroom, always pushing her students to reach their highest potential, Moreno said.

“She took her students where they were willing to go, and then pushed them a little bit more,” she said.

It has been a decade since Cardona’s passing on Aug. 3, 2011, but her impact on the community still echoes.

“I think of her as being one of the most graceful people that I knew, and she had that sort of effect on people,” Moreno said. “You always wanted to be a better person when you were around Annette.”