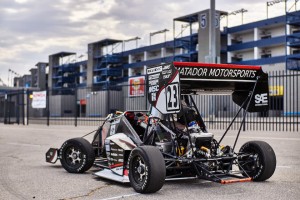 The Formula SAE team placed 5th in the competition, the highest placement any CSUN team has achieved.

The Matador Motorsports team has placed fifth overall in the Formula SAE competition, making history as the CSUN team’s best finish ever in the national contest, while beating major engineering schools such as Purdue University, Kansas State University and UC San Diego.

The annual competition is organized by the Society of Automotive Engineers International (SAE), with the goal of challenging students to conceive, design, fabricate and compete with a Formula One-style racing car.

In mechanical engineering, Formula SAE is one of the most sought-after senior design projects at any school because of its hands-on experience , according to team leader Jose Nuñez.

“A project of this scope is what gives employers a good pool of possible employees, just because of the nature of it,” Nunez said. “A lot of what you learn in Formula SAE is applicable to real life.”

This year, the competition was held at the Las Vegas Motor Speedway from June 16-19. The venue is famous for hosting the NASCAR Cup Series, as well as the National Hot Rod Association Nationals. 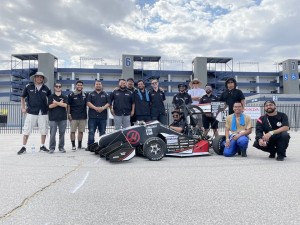 The team that represented CSUN at the competition.

CSUN’s 25-member team was led by graduating senior Jose M. Nuñez ’21 (Mechanical Engineering) and supervised by professor Stewart Prince. The team divided themselves into seven sub-teams that each worked on one aspect of the car — chassis, suspension, controls, engine, aerodynamics, electrics and drivetrain.

To set themselves apart from other teams, the students designed their vehicle to be as comfortable as possible, tailoring the car around the driver to help them focus on the actual race rather than the car itself. ​​One of the innovations the CSUN students implemented was the addition of a dash display mounted on the steering wheel, which provided crucial information to the driver such as engine revolutions per minute and temperature.

After three weeks of intense trial and error, the team was ready to compete in the final events of the program.

First, they had to pass the SAE inspection, to make sure the car was safe to drive. Once the vehicle was approved, the team was allowed to compete in four main events: acceleration, figure eight, open track and endurance. Endurance has the reputation for being the one event that most teams don’t finish on the 20km track, Nuñez said. Of the 22 teams in the endurance race, only nine finished — CSUN was one of them.

To ensure students’ safety while driving, the competitions are held individually, meaning that only one team competes at a time, which is why CSUN’s team didn’t know their standing until a couple of hours later.

“We were surprised to hear that we were fifth place, which is amazing for us — because that’s the best any CSUN team has ever finished,” Nuñez said.