Matadors have cooked up plenty of hair-raising cinematic brews in their cauldrons over the years, from the large to small screen, perfect for this spooky season or any time of year. CSUN students and alumni in the entertainment industry have poured their skills and talents into acting, producing, visual effects, art direction and more in some of horror’s creepiest movies and TV shows — including actors in some of the genre’s most iconic films.

This list is by no means all-inclusive — CSUN students and alumni have told dozens of scary stories in Hollywood and beyond — but it should give you plenty of options for the nights between now and Halloween, including some comedies and family films.

So, stay in, pop some popcorn, roast some pumpkin seeds, stock plenty of chocolate and grab your remote control or laptop, and step into these chilling realms… 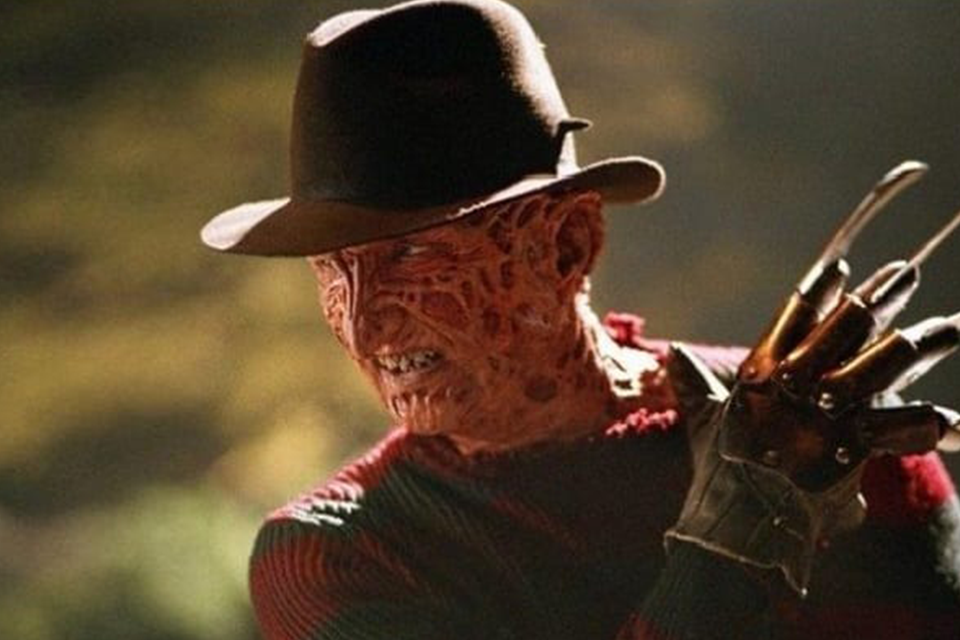 Did you know that one of the horror genre’s most iconic faces is a Matador?

The man behind the fedora and wielding the razor gloves of Freddy Krueger, Robert Englund, walked the Northridge campus as a student in the 1960s. Before he was a theatre major as a college student, Englund discovered his acting talent in the department’s summer theatre program, Teenage Drama Workshop.

Aside from Wes Craven’s 1984 classic, Englund also has starred as Freddy in the “A Nightmare on Elm Street” sequels — “Freddy’s Revenge,” “Dream Warriors,” “The Dream Master,” “The Dream Child,” “Freddy’s Dead: The Final Nightmare,” “Wes Craven’s New Nightmare” and “Freddy vs. Jason.”

Englund’s decades’ worth of screen credits include Doc Halloran in “Behind the Mask: The Rise of Leslie Vernon” and as Professor William Wexler in “Urban Legend.” He was also “The Phantom of the Opera” in the 1989 film adaptation of the Broadway musical. 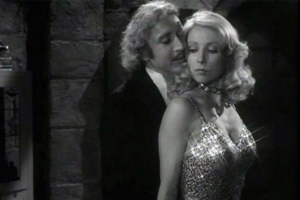 The grandson of Dr. Frankenstein — yes, that Dr. Frankenstein — tries to prove his grandfather’s genius by recreating his life-raising experiments. Alongside Gene Wilder, who takes the titular role, Garr stars as Inga, one of the young Frankenstein’s aides. Garr, who was nominated for an Academy Award for her role in “Tootsie,” studied theatre at CSUN and received a Distinguished Alumni Award in 2008.

Based on the infamous “creepypasta” (internet horror fiction) character, “Slender Man” goes meta and follows a group of Massachusetts teens as they try to disprove Slender Man’s existence. But new questions arise when one of them disappears.

CSUN alumnus Glenn S. Gainor ’95 (Radio-Television-Film), the current president of physical production at SonyPictures/Screen Gems, was an executive producer for the film. Gainor has a long list of executive producer credits on horror films, including “Priest,” “Prom Night” (2008), “The Possession of Hannah Grace,” “He’s Out There,” “Patient Zero,” “Deliver Us from Evil,” “Quarantine” and “Vacancy.”

Told through found footage, a young man and his friends dare to enter a forest believed to be haunted by the famous Blair Witch, in search of his missing sister. It is a sequel to 1999’s “The Blair Witch Project.”

This is no ordinary zombie movie. In this Robert Rodriguez action/horror spectacle, the fight for survival is led by a dancer with a machine gun for a leg.

“Planet Terror” was released as a part of the “Grindhouse” double feature with Quentin Tarantino’s “Grindhouse.” Marin, a Distinguished Alumni Award honoree who studied in CSUN’s credential program in the 1960s, appears in a fake trailer for a film called “Machete,” which in 2010 was adapted into a full-length movie.

Marin’s other spooky films include appearances in “Ghostbusters II” and the vampire-action movie “From Dusk Till Dawn.”

Matador behind the scenes: Michael Kelem, aerial director of photography

While it isn’t exactly a horror movie, “Twilight” is a love story between a vampire and a werewolf. Not to mention, the characters originated by Kristen Stewart, Robert Pattinson and Taylor Lautner have inspired enough Halloween costumes for the film to make it into this list.

Not a fan of cheesy vampire romance? You might want to check out the 2010 parody “Vampires Suck” — CSUN alumnus Michael Kelem ’19 (Radio-TV-Film) did the aerial cinematography for that, too. He was also the aerial camera operator for 1992’s “Pet Sematary II” and the 1995 sci-fi/horror film “Species.” 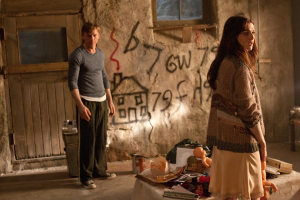 A married couple (portrayed by real-life husband and wife, Daniel Craig and Rachel Weisz) moves to New England, but later learn that their seemingly perfect home was actually the site of a horrific triple murder.

CSUN alumnus Mike Drake ’94 (Radio-Television-Film) was an executive producer for the film. He also produced the 2010 remake of “A Nightmare on Elm Street,” starring Jackie Earle Haley as Freddy Krueger.

A young woman returns from care in a psychiatric hospital and begins to see apparitions of her mother, who accuses her former nurse of murder. The 2009 paranormal film is adapted from the Korean original, “A Tale of Two Sisters.”

A man breaks into a country mansion to steal a gem and repay money he owes his ex-wife. But there, he finds the place has been rigged with a slew of deadly traps by a bigger evil — a masked madman.

Alumni Michael Barton ’02 (Special Major) and Bethany Barton ’05 (Theatre) were part of the art department behind the elaborate sets, as art director and lead painter, respectively. Bethany was also a painter for “Hellraiser: Revelations.”

Both Michael and Bethany were actively involved in CSUN’s theatre department, working both onstage and offstage on several productions.

Directed by “Saw” franchise director Darren Lynn Bousman, “St. Agatha” follows a pregnant young woman who attempts to seek refuge at a Catholic convent in small-town Georgia in 1957 — when she finds the community may be hiding dark, twisted secrets. CSUN theatre program alumna Carolyn Hennesy won widespread critical praise for her work as the dominating Mother Superior in the film. Hennesy, whose supernatural work also includes “True Blood,” won a Daytime Emmy Award for her role in “The Bay” and was nominated for her role on “General Hospital.”

Two siblings and their friends fend for their lives as they’re hunted down by a soul-consuming demon. The film features Deaf actor Sandra Mae Frank, and the rest of the hearing cast learned American Sign Language to communicate with her throughout the film. Matador Eric Bram ’95 (Radio-Television-Film), ’09 (M.S. Communicative Disorders), ’09 (Credential) co-wrote the screenplay with fellow CSUN alumnus David Allensworth ’94 (Radio-Television-Film), who also directed the film. 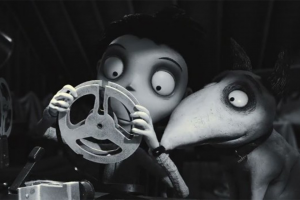 For those looking for something friendlier for the whole family, “Frankenweenie” blends wholesome animated storytelling with enough Halloween vibes to be perfect for the season. The story follows a young Victor Frankenstein as he revives his best friend, hid dog Sparky, and uncovers the secret to bringing dead animals back to life.

CSUN alumnus Don Hahn ’75 (Music), who received a Distinguished Alumni Award in 2011, was an executive producer for the stop-motion animated film. While you queue this up on Disney+, check out Hahn’s other family-friendly spooky flicks, including “Maleficent,” “The Haunted Mansion” and the 2006 3D re-release of “The Nightmare Before Christmas.” 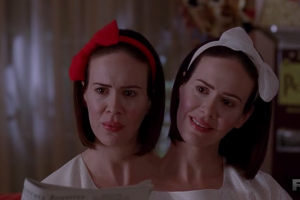 AMC’s iconic post-apocalpytic horror series “The Walking Dead,” about a group of survivors trying to stay safe in a  world filled with zombies. Lauren Ridloff ’01 (English – Creative Writing) joined the cast in season 9 as Connie, a stealth fighter who strives to protect her younger sister, Kelly. 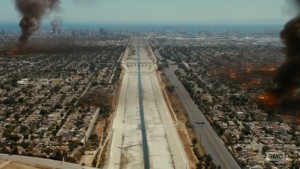 “Fear the Walking Dead,” a spinoff of “The Walking Dead,” set in Los Angeles, chronicles the genesis of the apocalypse run by the undead. In the season 1 finale, Kelem captured the breathtaking and harrowing overhead shots of the city on fire.

In seasons 5 and 6, series protagonist Madison Clark meets the good-natured nurse June, portrayed by Jenna Elfman, who attended CSUN before her big break. Elfman also appears in an episode of Jordan Peele’s new “The Twilight Zone” anthology. In the season 2 episode “A Human Face,” Elfman stars as grieving mother Barbara, who moves into a new neighborhood with her husband and encounters an alien posing as her deceased daughter. 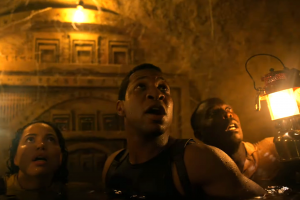 Based on the 2016 novel, “Lovecraft Country” uncovers the horrors of the Jim Crow era as it takes viewers on a road trip with a young Black man as he searches for his father across 1950s America.

The CW’s “The Originals” was a spinoff of the network’s supernatural teen drama “The Vampire Diaries,” looking into the politics and history of a fictional New Orleans’ French Quarter, through the eyes of vampire-werewolf hybrid Klaus Mikaelson. 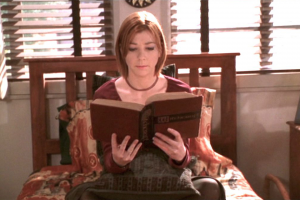 “Buffy” defies the barriers of time, as it continues to attract fans years after it aired its final episode. Alyson Hannigan, who attended CSUN in the early 1990s, stars in all seven seasons as Buffy Summers’ best friend and vampire-slaying sidekick, Willow Rosenberg. Fun fact: “Buffy” also sometimes filmed on campus, including using Bookstein Hall for exterior shots of the new Sunnydale High late in the series.

There are many other creative CSUN students and alumni doing their part in telling scary stories in Hollywood and beyond. Let us know about your spooky projects on Twitter or Instagram with the hashtag #CSUNonScreen.