“Translucent” is a documentary that shows the raw reality of gender transitioning in a world where transgender representation is scarce and often inaccurate, giving a voice to someone who genuinely understands the struggle from personal experience.

“I had the opportunity as a trans person and as a trans filmmaking student to tell my story, and tell it the right way,” said Avery Fox, co-creator and main subject of the documentary. “To know that we could make this story and create an impact with just this college project helps me feel really confident about our futures and the kind of stories that we can tell next.” 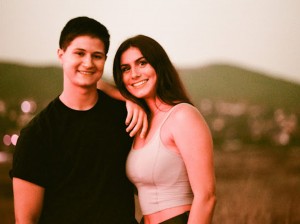 For their work on the deeply moving documentary, Fox ’21 (Television Production, he/him) and Kayla Hoeflinger ’21 (Television Production, she/her) became the first CSUN students to be selected as finalists for the prestigious Student Academy Awards, a competition sponsored by the Academy of Motion Picture Arts and Sciences. The recent graduates are competing in the Documentary category with their film about a young adult’s gender transition.

The international competition selects the best films from a pool of more than 1,400 projects, with the finalists making up fewer than 7% of entries. Previous winners have gone on to become Academy Award-winning filmmakers, including Spike Lee, Pete Docter and Robert Zemeckis.

“Translucent” explores Fox’s transition from female to male, giving an in-depth look at his process while telling the story of his family coming to terms with his decision. The documentary is a breath of fresh air, presenting an accurate representation of the transition process that’s rarely portrayed in the media.

“‘Translucent’ is a resonant and powerful portrait of an ordinary family with an extraordinary man as its anchor, one with the potential to change lives not just within trans and LGBTQIA families, but all families, everywhere,” said film professor Julie Ann Sipos, who helped the pair develop the documentary.

The pair’s achievement also highlights the caliber of work being done in CSUN’s Department of Cinema and Television Arts (CTVA), a primarily undergraduate program competing against graduate programs such as NYU, USC and AFI. 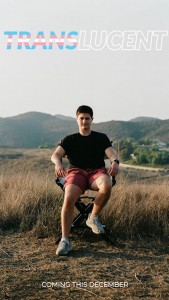 “Translucent” showcases the reality of gender transitioning from a personal perspective. Photo courtesy of Avery Fox.

Despite the setbacks and delays caused by the COVID-19 pandemic, the students were not deterred in their documentary development. If anything, their faculty advisors said, the move to online learning helped them better hone their idea.

“These two students seized upon [the] campus closure as an opportunity to drill down and craft that story, rather than merely tell it,” Sipos said. “They spent months exploring their characters and arcs, acquiring the skills and discipline to structure this deeply personal journey within a tightly woven narrative.”

It was in Sipos’ class where inspiration first struck, Fox and Hoeflinger said. The students ​documented each other’s lives in a two-minute self-introductory exercise, prompting positive reviews from their classmates. The enthusiastic feedback inspired Fox and Hoeflinger to explore the concept further for their senior thesis project, “Translucent.”

Both students started developing the project in 2020, pre-COVID, and they continued hashing out the details through the pandemic. After months of planning, filming, Zoom interviews and selecting content from more than three hours of footage, they completed the 24-minute documentary and submitted it to the Student Academy Awards competition in late May.

“It wasn’t perfect, but I think that other people found value in it, and that’s what made it,” Hoeflinger said. “We’re really lucky that people enjoyed it, and they got something out of it, and they related to his story — that’s what we wanted at the end of the day.”

The success of their documentary reflects on the maturity and courage of CSUN students to take on challenging subject matter in their films, said Wynter. “We are in the golden age of the documentary, and that our new area of concentration has evolved during this period is very significant.”

Later this month, the Academy will announce the winners of the Student Academy Awards, and if Fox and Hoeflinger place, they will both attend the October ceremony where the organization will honor the winners.

In the meantime, the pair will host an online screening of their film, accompanied by a Q&A session, from 8 to 9 p.m. on Sept. 21 via Zoom. For links and more information, visit Fox’s Instagram: @averywinterfox. Additionally, the documentary is available on YouTube