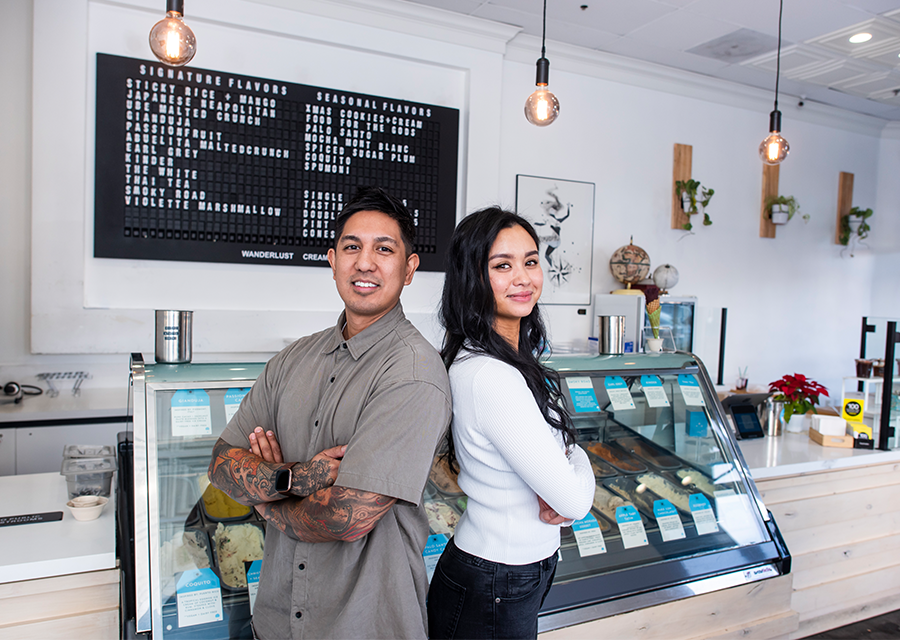 On a sunny afternoon in Tarzana, a trio of friends breezed past a coffee shop and a poké restaurant to reach the glass doors of Wanderlust Creamery. Inside, none bothered to read the letter-board menu — they already knew exactly what they wanted.

One ordered a scoop of hazelnut Kinder. The second, a seasonal special of pistachio and candied-fruit Italian spumoni. The third scanned each tub of the brightly lit freezer display, shrugged and, with a smile on her face, ordered a cone of Filipino ube malted crunch — a vibrant purple concoction that’s wildly popular. Before she joined her two friends at a patio table outside, she paused at the ice cream counter and asked an employee, “Still no orange flower?”

That flavor — orange flower baklava, inspired by the Moroccan dessert — hasn’t been served since 2018 but had become a cult favorite of Wanderlust Creamery customers. The hopeful young customer, a Tarzana resident, said she’s been to Wanderlust Creamery nearly every month since it opened in 2015 (always hopeful for the return of orange flower baklava, but happy to try new flavors, she said). 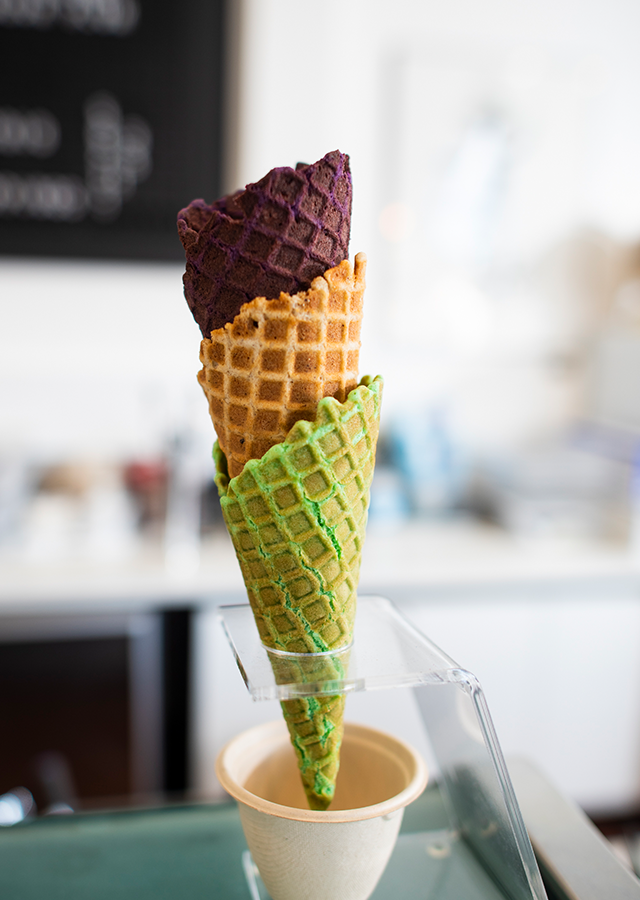 It’s that devoted customer base and social media following for their inventive, artisanal flavors that’s fueled Wanderlust Creamery’s phenomenal growth these past few years. Each flavor is inspired by a different travel destination, including the Philippines, Thailand, China, France, Great Britain and Italy, to name a few. In spring 2019, honoring the final season of HBO’s hit series “Game of Thrones,” the duo even brought the fictional world of Westeros to life with the cleverly titled “Game of Cones” flavor series.

Launching an ice cream company was not in the original cards for Wanderlust Creamery co-founders and married duo Adrienne Borlongan ’09 (Food Science) and Jon-Patrick “JP” Lopez ’08 (Business Law). In 2014, both were working successful jobs as a mixologist and a real estate attorney, respectively.

Then, their sweet tooth opened a door.

“In late 2014, we just got obsessed with ice cream,” Borlongan said. “We’d go to a new place and get some ice cream every weekend. Then, I bought a gelato maker — a really expensive one.”

Crafting ice cream was too impractical to remain a hobby, she said. “So, I told people I’d start an ice cream shop, just to kind of justify to myself the cost of the gelato maker,” she said, chuckling.

He was not a businessman, but he took what he’d learned in his accounting classes at CSUN, his understanding of business from a corporate standpoint and followed his instincts to help Borlongan make the ice cream dream a reality.

On New Year’s Day in 2015, the couple made a resolution: see their ice cream business plan through.

“Then, it just snowballed,” Lopez said. “Adrienne started making ice cream and buying textbooks on how to make it. She created a flavor menu, and we did tastings. Suddenly, I thought, ‘Wow, we actually have something here. Let’s consider the possibility of opening it with bricks and mortar.”

They broke ground on the Tarzana location (their first) on Ventura Boulevard later that year, opening its doors to ice cream lovers of the San Fernando Valley. Since then, they’ve launched four other Wanderlust Creamery locations: Atwater Village, Venice, Smorgasburg L.A. in downtown Los Angeles and, their newest — Pasadena, in September 2019. 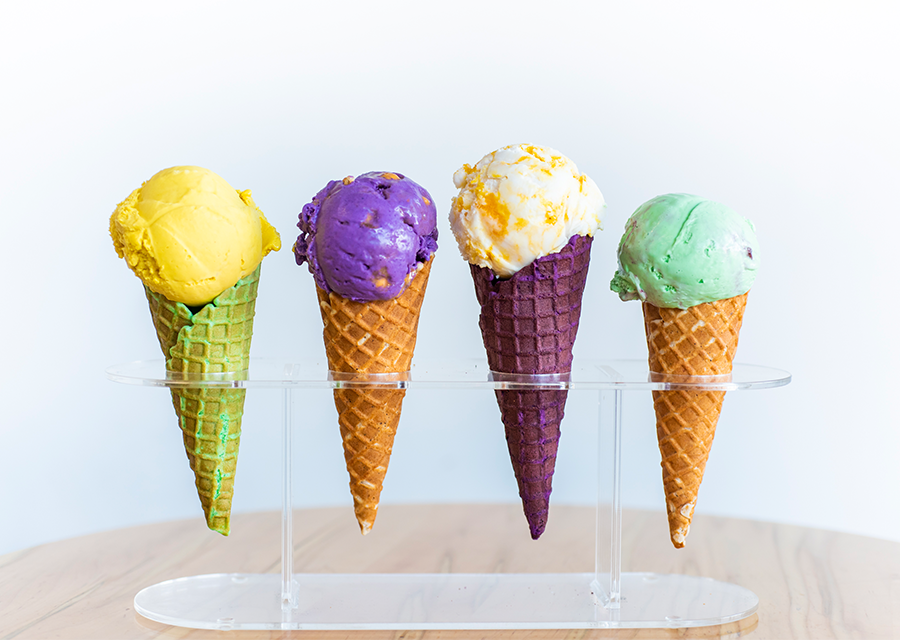 The couple begin by selecting areas known for adventurous eaters and cultural demographics to whom their international flavors appeal. But there’s also another strategy at play:

“A secret to our success is, we don’t ever take a space that was not a pre-existing food place,” Borlongan said. Their Tarzana and Atwater Village locations were previously Cold Stone Creamery franchises, and the new Pasadena location was a Coolhaus. This strategy gives them spaces that already include a kitchen, storage and freezer displays. The Venice location, previously a juice shop with a bar counter and stools, gives customers a new kind of experience as they get to watch fresh scoops served while they enjoy their own, they said.

Another important tool in their business arsenal is social media, which they said attracts customers no matter where the shop is located.

“Probably more than half of our success is because of social media,” Borlongan said. Their Instagram page, which features artistic photographs of their ice cream, has more than 65,000 followers.

“Viral” became the understatement of their year when Wanderlust Creamery debuted a limited-edition Chinese New Year flavor in February 2019. “The White,” inspired by White Rabbit, a brand of sweet milk candy from Shanghai, which is also popular in Southeast Asia, sold out virtually overnight after thousands of followers viewed their Instagram post featuring the new flavor.

Following its success, Borlongan said, “all these other ice cream shops across the country and across the world started replicating it.” Among the copycats was Malaysian ice cream brand Inside Scoop, which made its own version of the flavor later that month after Wanderlust Creamery’s post influenced a demand in Malaysia.

“It even caused a shortage [of White Rabbit candy],” Lopez added. Candy wholesalers suddenly reported that the rest of their supplies were reserved by other ice cream establishments, he said.

Many fans flock to Wanderlust Creamery and its Instagram page to marvel at the ever-changing ice cream varieties, but few know how Borlongan brings those flavor concepts to life.

From Concept to Cone: The Science of Artisanal Ice Cream

Wanderlust Creamery offers a set of signature selections, available year-round, and the company introduces new menu flavors every month. Devotees know the drill — many visit the shops at the start of each month, when new flavors are revealed, Borlongan said. 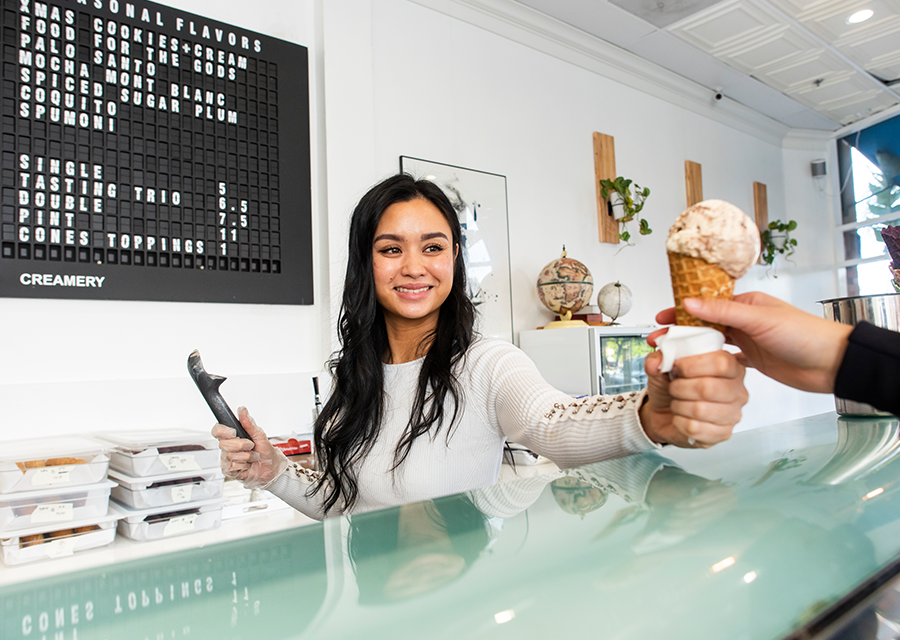 Borlongan serves up one of her scrumptious ice cream creations to a hungry customer. Photo by David J. Hawkins.

The magic behind her handcrafted flavors, which have been recognized by publications such as INSIDER, Food & Wine and USA Today, isn’t magic at all — it’s chemistry.

Borlongan, who spent her days at CSUN studying the science behind food, said she never trusts an existing, external recipe for ice cream — nor for any of her food. Instead, she looks to textbooks and her own experimentation, which involves testing taste and texture.

The first step in making ice cream is sourcing and blending ingredients to form the flavor in a liquid base, she said. This process involves much more than throwing in new components to achieve different taste combinations, Borlongan noted.

“Ice cream is a science,” Borlongan said. “There are certain percentages and limits to ice cream. Every time you add an ingredient, you have to consider how much sugar is in it and if it has fat.”

Exceeding or falling short on certain amounts of sugar and air blended into the base of the ice cream will affect its texture and freezing ability. Borlongan uses a sugar refractometer, a device that uses light to measure the amount of sugar in any substance, to find the sweet spot between the maximum and minimum sugar levels — and get the desired texture for their sorbets.

Butterfat content involves the same amount of scrutiny. Artisanal, handmade ice cream differs from its factory-made counterpart largely due to its higher butterfat content, which gives it a smoother, richer texture. However, having too much of it can similarly affect its freezing ability and alter its “scoopability,” she said. 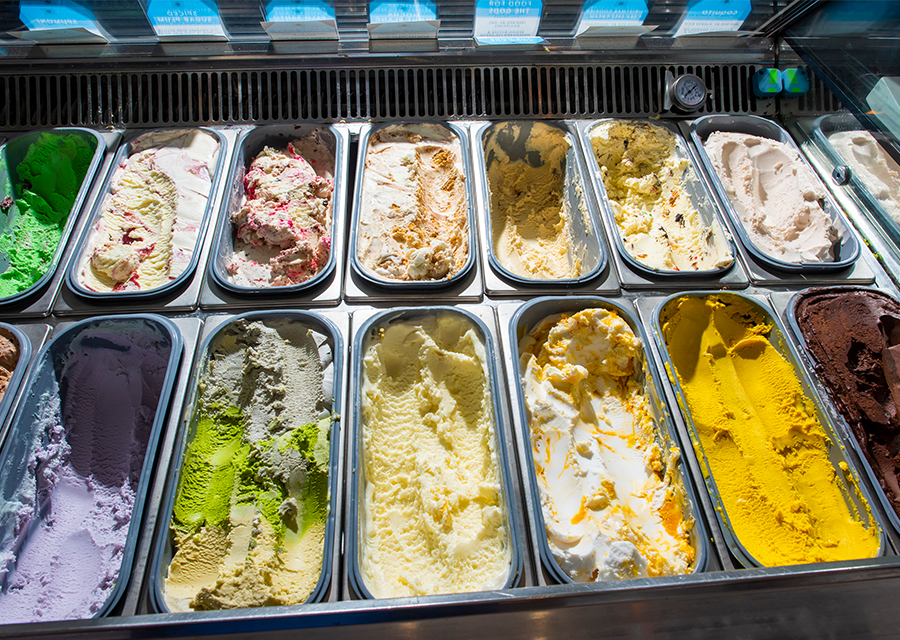 Since it opened in 2015, Wanderlust Creamery has crafted dozens of signature flavors and seasonal specials, which change every month. Photo by David J. Hawkins.

Borlongan and her employees take the liquid base to the other side of the kitchen to a batch freezer, a piece of equipment used to make artisanal ice cream and gelato. The base mixture is placed inside the batch freezer’s metal barrel, where a blade churns through it, introducing air bubbles into it as it cools and freezes.

Then, it’s a temperature game. To get the “scoopable” ice cream texture — that is, firmer than gelato, which is served with a spade instead of a scoop — the mixture sits briefly in a blast freezer at -35 degrees Fahrenheit, and then it is transferred to a walk-in freezer, where it is stored at -10 degrees Fahrenheit until it is brought out front for serving to customers.

Balancing personal life and business is a challenge to most, and Lopez and Borlongan are no exception — especially as they raise three children while guiding their company’s growth. However, the couple sees the increasing demands of both sides of their lives as “a blessing in disguise,” Lopez said. 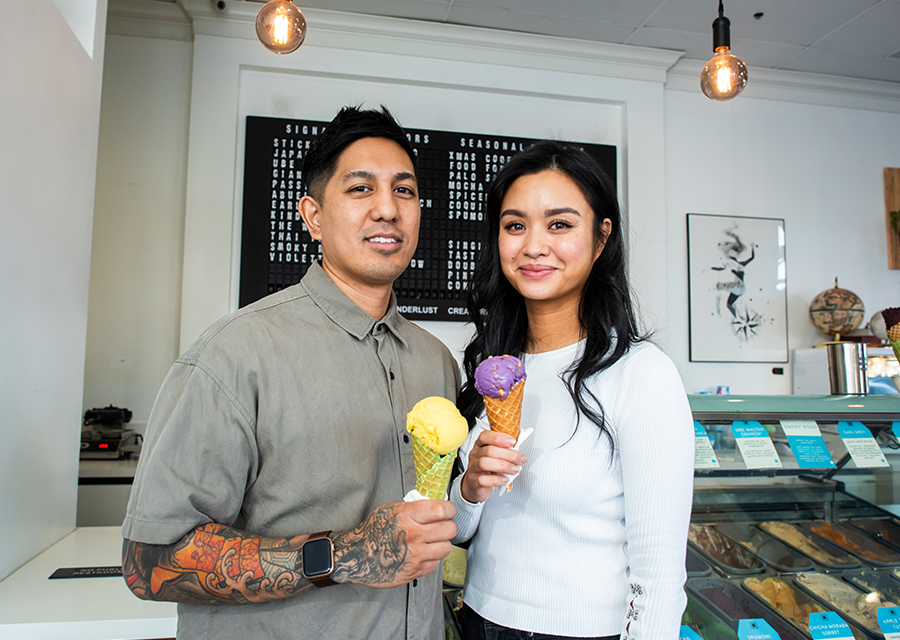 Borlongan said her need to carve out more family time allowed her to step away from the kitchen, where she used to make every single batch of Wanderlust Creamery ice cream, and set up a system where she can comfortably devise and pass on her recipes.

As their business continues to grow, they said, they feel their decision to build a company from the ground up was worth it.

“Don’t listen to the noise,” Lopez advised CSUN students and fellow alumni who are aspiring entrepreneurs.

“You did the research and you did the time,” he continued. “It doesn’t matter what other people think, as long as you did everything that you could possibly do to ensure it works.”