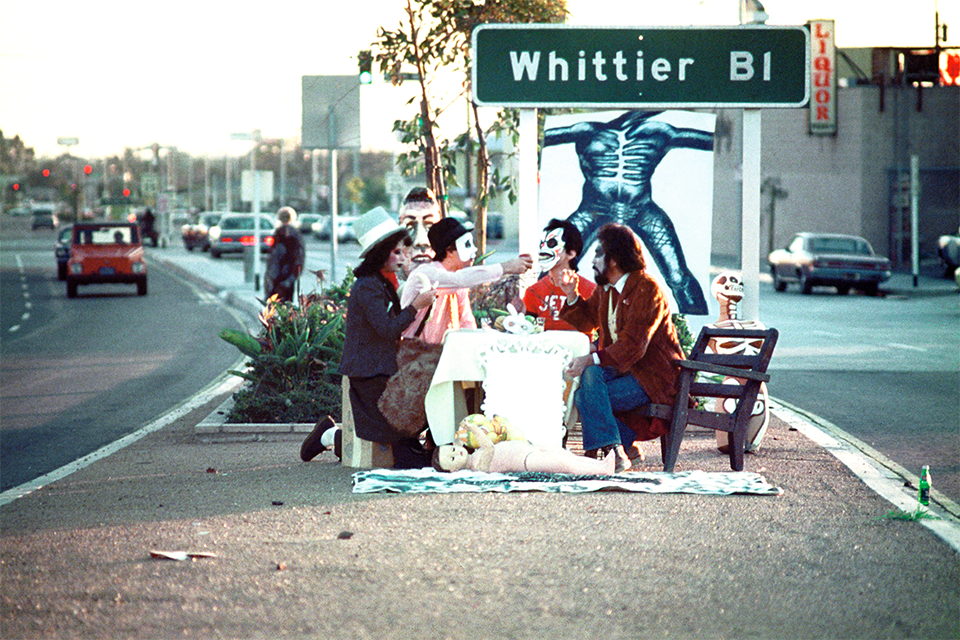 Through clouds of tear gas, hundreds screamed, ran for their lives and searched for shelter as law enforcement stormed the roads with batons and bullets flying.

In the midst of it, an 18-year-old Harry Gamboa Jr. sprinted away from the pandemonium. The streets he called his backyard were smothered with poison air and crushed by police cars ramming into bodies.

On the morning of Aug. 29, 1970, what started as a peaceful march in East Los Angeles turned into a tumultuous conflict between law enforcement and the protesters that came to cry out against the Vietnam War. Remembered as the Chicano Moratorium, the gathering aimed to declare an end to the war that sent Mexican Americans to battle and die in numbers disproportionate to their population.

“Seventeen-year-olds were encouraged to get their parental consent to join the Marines,” said Gamboa, a lecturer in CSUN’s Department of Chicana/o Studies in the College of Humanities. He emphasized the point that even Mexican American boys who would still need their parents to approve their military service were drafted too.

“Many of my friends, by the time I was 18, were already in Vietnam,” he said. “Some had already been killed.”

The community responded to violence overseas with peace at home and organized a nonviolent demonstration — a symbolic march from Laguna Park (now Ruben F. Salazar Park) down Whittier Boulevard, where they proclaimed their stand to stop sending “their sons, brothers, fathers, cousins, uncles to a war that had no explanation,” Gamboa said.

The movement drew more than 20,000 peaceful demonstrators, making it the largest antiwar demonstration on the West Coast at the time, Gamboa said. Joining the ranks were a number of CSUN alumni, staff and faculty, including Gamboa and Chicana/o studies professor Mary Pardo, who continue to share the Moratorium’s legacy with students, in and out of the classroom, to inspire the new generation of activists.

And the ripple effect shows. Students in CSUN’s Chicano activist group Movimiento Estudiantil Chicano de Aztlán (M.E.Ch.A) have continued the fight for justice. They have actively promoted the importance of ethnic studies, rallied support for DACA students and, most recently, joined the march on Aug. 29, 2020, commemorating the 50th anniversary of the Chicano Moratorium.

The Moratorium and the years of activism that preceded it jolted the nation to awareness about injustices that impacted racial minorities and plagued underrepresented communities throughout the 1960s and ’70s.

Fifty years later, social protests also have made an indelible mark on 2020 — the deaths of George Floyd and Breonna Taylor and the shooting of Jacob Blake at the hands of police reinvigorated the Black Lives Matter movement — and they bear a strong connection to what transpired in East L.A. in 1970.

“We’re still talking about some of the same issues — unfair immigration laws, certain practices and policies, and certainly police brutality, education, inequality in terms of wages and so forth,” Pardo said. “All those are continuing the 1970 themes in 2020.”

The Chicano Moratorium was largely organized by university students connected to UCLA’s United Mexican American Students (UMAS) and other institutions in and around Los Angeles, who saw the connections between the antiwar effort and the issues raised by the 1960s Chicano movement.

“The Chicano community decided that we would move toward education and become self-empowered by contributing to the national and the international narrative,” he said.

But as the 1970 Moratorium demonstrators demanded an end to the war overseas, the war came to them at home.

A violent outbreak ensued as police and military rolled into Laguna Park to break up the assembly.

Pardo, an undergraduate in 1970, arrived at Whittier Boulevard with her fellow students in Cal State L.A.’s M.E.Ch.A. As the number of marchers grew, Pardo and a small group left the rally for just a moment, to move their car to a safer spot.

“And on our way back, people were just … completely terrorized, and police were driving recklessly through the streets,” Pardo said. “I saw people running and screaming and using garden hoses to wash [tear gas] off their faces.”

By the end of the day, thousands were injured and three people were killed, including Los Angeles Times reporter and activist Ruben Salazar.

The media sensationalized its reporting, Gamboa said, by portraying the events of Aug. 29 as if it were a two-way conflict between law enforcement and the demonstrators, who weren’t described in the way they actually behaved: peaceful and unarmed.

“And [the media] never once mentioned that there were bodies lying on the streets on Whittier Boulevard and in the neighborhoods that the police had shot and harmed,” Gamboa said, “that children were beaten and stomped on, that we were tear gassed … that police back then were engaged in free fire, [firing] live ammunition indiscriminately into crowds.”

A documentary by Jose Luis Ruiz titled “Requiem 29” contains footage of what the media failed to report, Gamboa said.

“In that [footage], you will see the police brutally beating people, hitting them in the back of the head with batons, trying to crack their skulls,” he said.

The Chicano Moratorium became a testament to how people can come together to end injustice and violence, but also a reminder of why the community continues to fight for their voice to be heard.

How It Changed Them

Reflecting on the 50 years since the Chicano Moratorium, many participants remember more than just the loss and trauma. They also recall how it changed life as they knew it for their community.

Pardo was already a youth activist with M.E.Ch.A before the Moratorium. Yet, seeing the solidarity shown by the people of East L.A. and how the march was violently disrupted by law enforcement “was an experience that opened the door to me seeing the world in a different way,” she said.

Aside from the Vietnam War, Pardo said, her eyes were opened to other issues, including police brutality and anti-immigrant sentiments.

For Gamboa — a prolific essayist, photographer and performance artist — the day of the Moratorium became a pivotal moment in his career.

“In the midst of the tear gas, I was approached by one of my mentors, Francisca Flores, who handed me a copy of her magazine and anointed me the editor of the magazine in the middle of battle,” Gamboa recalled. Flores was a prominent activist for the Chicano, feminist and labor rights movements, and a journalist for the magazine Regeneración.

As the new editor, “I transformed it into a political and arts magazine,” Gamboa said. “That magazine helped me to organize the art group that I formed at the time, Asco, and that group went on to international acclaim.” Asco was a Chicano artist collective based in East L.A. that aimed to shed light on sociopolitical issues affecting the Chicano community. They were active from 1972-87.

To many, the Moratorium was also a historical symbol of gathering and connection.

The crowd of tens of thousands was a diverse one. Gamboa recalled seeing people from all over the United States, representing different racial groups and religious sects.

He noted that the movement was largely centered on family.

“Families were protesting together,” he said. “A large proportion of the people that were there were families, with young children in strollers or carried in arms, and elderly people with walkers.”

As the same social issues felt by the community decades ago are echoed by the protests of 2020, Pardo said, the struggle presses on.

“It’s always a work in progress,” she added. “Democracy is always a battle, and social protest is still an important asset — it’s an important vehicle to make democracy work a little bit better.”

Ivan Salinas, a senior at CSUN and a student organizer with CSUN’s M.E.Ch.A, first heard about the Chicano Moratorium as a freshman, in a Chicana/o studies class taught by Gamboa.

Salinas said that despite not having lived through the Moratorium, his generation still has so much to learn from it.

“The Moratorium is a reminder of the community activism that still thrives in the Chicano community, but now it intersects with the issues still present in our society today — such as institutional racism and police brutality toward communities of color,” he said, pointing to the Black Lives Matter protests that took center stage this year.

“My generation is making it a priority to fix these systemic issues by engaging in political action and not undermining the power of education,” Salinas said. “I hope that people who truly have the capability of making immediate changes actually listen to our communities, and recognize how important it is that we work toward a life of racial solidarity and equality.”

Gamboa sees the Moratorium as a reminder of the strength of his community.

“We have to recognize that Chicanos have struggled and have persevered,” he said, “and as a result of the Moratorium and the actions of the East L.A. walkouts, there have been thousands and thousands of Mexican Americans who have become educated, and our voice has become more empowered.”