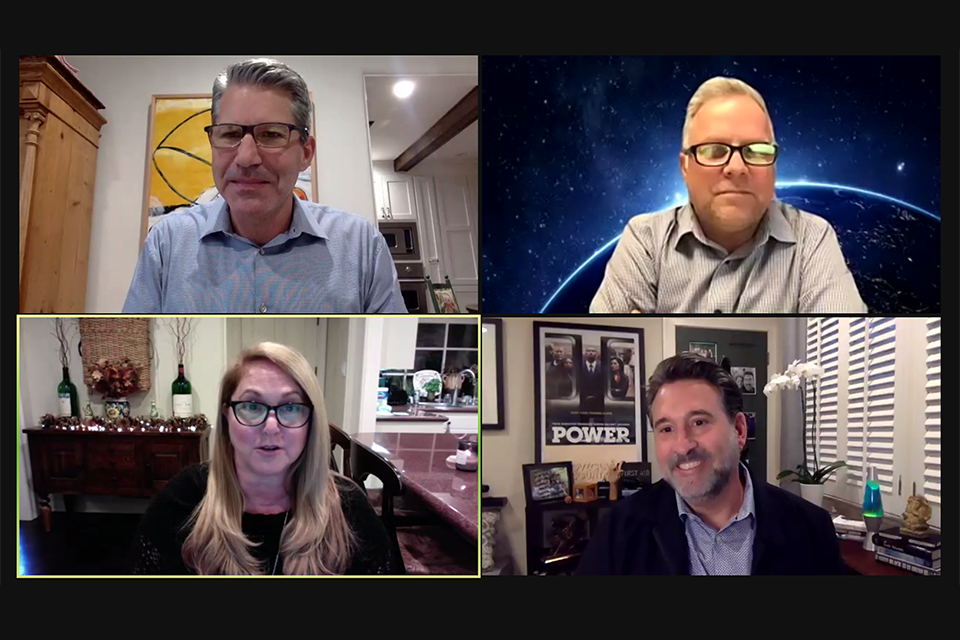 “The Matrix,” “Big Love” and “Friends” are just the tip of the iceberg when it comes to the collective work of accomplished CSUN alumni Louis Santor ’89 (Accounting Theory and Practice), David Knoller ’86 (Theatre) and Wendy Knoller ’87 (Radio/TV Production), who have made careers in the business and creative sides of the entertainment industry.

But before they made some of America’s most celebrated movies and TV series, they had different plans for their careers. As students at CSUN, Santor, David Knoller and Wendy Knoller planned to be an accountant, an actor and a journalist, respectively.

On Nov. 17, CSUN’s David Nazarian College of Business and Economics held its biannual Distinguished Speaker Series. Following this fall’s theme of “The Business of Entertainment,” Santor and the Knollers talked about their own roads into the entertainment world, as well as how recent events have affected the industry.

Wendy Knoller won an Emmy as a producer on the timeless sitcom “Friends.” She was also a post-production supervisor for “Star Trek: The Next Generation,” a co-producer for “Veronica’s Closet” and an associate producer for “Friends” spinoff “Joey.”

She began at CSUN as a journalism major only to find that neither writing nor broadcast was her passion. She shifted to radio/TV production and took one internship after another, until she became an office production assistant for “Pee-wee’s Playhouse.”

She encouraged Matadors starting in the industry to “continue and do whatever it is to the best of your ability. When the director wanted curly fries, I made the best curly fries you could possibly make.”

She pressed on and later took a job as a page in Paramount Pictures. There, she met a colleague that introduced her to “Friends” executive producer Kevin Bright, who would go on to help her launch her producing career.

Although they were at CSUN at the same time, Wendy Knoller met her husband David when they were both working with Bright.

David Knoller’s prolific credits as a television producer, director and writer include “Freaks and Geeks,” “Jesse” (for which Bright was also a director and producer), “Big Love,” “Carnivale,” Starz’s “Power” and HBO’s “Lovecraft Country.”

At CSUN, David took classes for both theatre and radio/TV production, with the hopes of being an actor and a director. He landed an internship — logging tapes for a reality show — and a full-time position that would lead to the rest of his career.

As the first member of his family to go to college, Santor knew he wanted to be in business. While a student at CSUN, Santor was already an analyst at an accounting firm, where he said he built relationships with people in entertainment.

His new interest led him to take a job at PricewaterhouseCoopers. “And I just got thrown into all kinds of clients in the entertainment industry … and I learned the [entertainment] business from special effects companies to studio facilities to small producers.”

Since 2019, Santor has been the chief operating officer of Village Roadshow Entertainment, which has produced more than 85 feature films from its extensive library of intellectual property, including “The Matrix” series, the “Ocean’s” series, “Joker,” Steven Spielberg’s “Ready Player One” and many more.

The entertainment industry was struck hard by the pandemic. Many productions have had to shut down, including “The Matrix 4,” which Santor’s company was completing.

However, when Gersh asked the panelists about how COVID-19 has affected their work, they responded with optimism.

David Knoller has been developing new shows that he has been pitching since the beginning of the quarantine. He talked about how this time can be opportune for creatives who are writing, developing and pitching projects. On top of having more time to write, he said, “I can be in my pajamas and pitch a show.”

The panelists also discussed how the new COVID safety guidelines can present new ways to get into the industry.

“The traditional path in production is to be a P.A. (production assistant),” Wendy Knoller said. “But now there’s a whole new section — there are COVID supervisors, medical teams and COVID P.A.s.”

David Knoller said their son, who graduated from the University of Michigan in 2019, jumped at an opportunity to work as a COVID P.A. on Netflix’s “Ozark” as a way to join the show’s camera department.

As the guest lecture came to a close, the panelists gave their advice to the students, most of whom were from the Nazarian College and the Mike Curb College of Arts, Media, and Communication.

“My dad used to tease me, saying, ‘Jack of all trades, master of none,'” David Knoller said. “But in the long run, I look back and go, ‘That jack of all trades made me a really good producer,’ because I really got to know every department.”

“Your first job, second job and third job will not be where you want to be — they’ll just be stepping stones where you learn a lot about yourself, about others and about really where you want your career to go,” Wendy Knoller said. “You have to give yourself the opportunity to be open to what’s out there.”