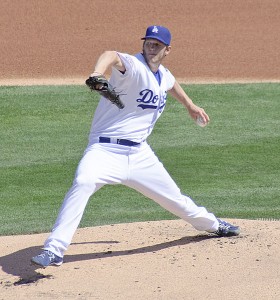 Los Angeles Dodgers pitcher Clayton Kershaw—currently considered the best pitcher in Major League Baseball as a three-time All-Star and Cy Young award winner—is as much a winner off the field as he is on it. His humanitarian work is legendary, and that’s one of the reasons he was chosen as this year’s recipient of the Dodger’s Roy Campanella Award, which also also makes winners of the physical therapy students at California State University, Northridge.

Kershaw and his wife, Ellen, launched the Kershaw’s Challenge Foundation and wrote the book “Arise” to help to raise money to build an orphanage in Zambia. Kershaw has also been honored by Major League Baseball with the Roberto Clemente Award and the Branch Rickey Award for his humanitarian work.

His latest honor, voted upon by Dodgers uniform personnel, will be presented to Kershaw by Campanella’s daughter, Joni Campanella Roan, during pregame ceremonies at the Sept. 28 game against the Colorado Rockies.

The video below highlights the relationship between the Dodgers and CSUN’s physical therapy students.