Matador Hall of Famer and three-time national champion Barbara Jordan ‘98 (Kinesiology) has a nearly unmatched softball resume. But her career accomplishments, she said, have been outmatched by what she has done to potentially save lives with her company Always Bev (Always Be Vigilant).

Always Bev was started in 2018 to honor Jordan’s sister, Beverly Jordan, who was murdered by her fiancé 30 years earlier. The company offers self-defense classes to people and provides skills to counter violence and sexual assault. Barbara Jordan teaches attendees awareness and how to avoid vulnerable situations.

Jordan grew up in Northridge with four siblings. All five of them ended up going to CSUN, where Jordan ended up becoming a star softball player.

During her CSUN playing career, Jordan won three NCAA Division II championships, was a three-time All-American, a two-time winner of the California Collegiate Athletic Association Most Valuable Player award, and became a member of the Matador Hall of Fame. She later played on Team USA for eight years, was on the coaching staff for the Junior National and Women’s National Team — leading both to world championship gold medals, and was the head coach of the CSUN softball team.

However, the start of her historic career was marked by the tragedy of Beverly’s murder. Before that event, Jordan had suspicions about the man responsible because of his unusual actions and words. She felt that if she or those around her were more comfortable with their intuitions, things might have been different. She said friends came to her decades later and revealed that they also had the same feelings and suspicions about the man who committed the crime.

“This event changed the course of my life and my family was never the same,” Jordan said. “However, there were warning signs. There were things that this guy said that simply didn’t add up, but we didn’t ask any questions.” 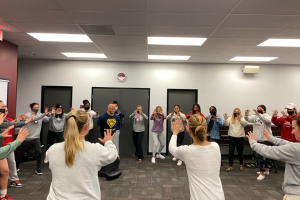 This is when Always Bev came to life. Jordan realized that normal-looking people with terrible intentions are all around us and we have no way to know it simply off of looks. Always Bev has had classes across the country working with universities, corporations, and organizations offering in-person and virtual classes. Jordan teaches the classes herself in 90-minute sessions. She is trained in Krav Maga and is also certified in active shooting training.

“This class is the best thing that I have ever done,” she said. “You can have all of my softball accolades and medals, this class right here is my everything. It is powerful. It makes a difference. It makes people aware. And, it keeps people safe.”