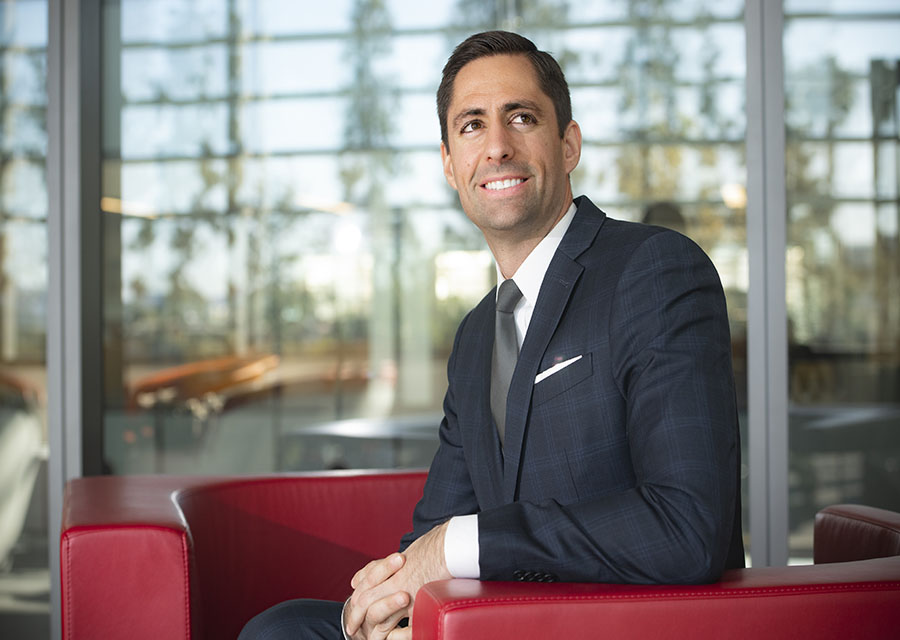 Bryan Longpre ’10 (Finance) was a CSUN student-athlete and professional pitcher for the Toronto Blue Jays. Photo by Lee Choo.

Bryan Longpre ’10 (Finance) has been throwing strikes his whole life. He was a student-athlete at CSUN before graduating and signing a professional baseball contract as a pitcher with the Toronto Blue Jays. He spent three years in the Blue Jays’ minor league system, playing with some of the best in the game, even striking out Yankees star catcher Gary Sanchez (after giving up a double to Sanchez as well, Longpre said).

Longpre is now a senior vice president at Morgan Stanley, where he made the Forbes list of Next-Gen Best-In-State Wealth Advisors and is leading the charge on initiatives such as sustainable investing at the financial firm. He combines his passion for environmental and societal sustainability with finance and knowledge of long-term economic returns.

After three years of hard work, climbing and grinding in the minor leagues, what was once Longpre’s childhood dream ended with injury. The right-hander had to make a decision between his dream of making it to “the show” in Major League Baseball or transitioning into a different profession.

In 2012, Longpre tore a ligament in his throwing elbow, a pitcher’s worst nightmare — which would have required him to undergo the infamous Tommy John surgery to repair the tear. Weighing the options of a lengthy rehab stint after surgery, or hanging up his glove for good, he decided his next path would be in the office, not on the mound. Longpre had worked as a part-time financial analyst at Morgan Stanley during his off seasons, and his degree in finance from CSUN allowed him to easily transition into the financial field full time.

From an early age, the Matador alumnus had had a passion for finance. When he wasn’t fooling batters with his changeup, he was an unusual kid — saving money and planning for the future. His money experience came with many valuable lessons. As a child, Longpre received an allowance, and he spent years learning how to use it and, in some cases, waste it.

During his time at CSUN, he had combined his passions for baseball and finance. As a student-athlete, dedication and hard work were a mainstay in his life. Coaches and teachers pushed him to be successful and professional on the field, in the classroom and in life.

“On the sports side, I was really fortunate. I had several very good coaches here on the CSUN baseball team,” Longpre said. “What they taught me in baseball as a student-athlete was how to handle adversity and build up self-confidence. The business world is rough, and you fail more times than you succeed.”

Longpre is still in touch with his CSUN coaches. Former Head Coach Steve Rousey had a big impact on him as a pitcher and competitor, Longpre said. Former assistant coach Mark “Kerten” Kertenian, who climbed the ranks of the Los Angeles Dodgers organization and is now a coach for the Dodgers’ AAA affiliate, the Oklahoma City Dodgers, left his mark on Longpre. They still talk today.

“I remember one day, Kerten took the pitchers aside and gave us a pep talk after we had been collectively struggling,” Longpre said. “I went up to him after practice that day, and I told him he was going to make a great head coach one day. Coach Kertenian has more heart than anyone I know. He always had the unique ability to be your friend, but still command your respect and push you to your limits.”

The baseball field wasn’t the only place Longpre found mentorship and inspiration at CSUN. In the David Nazarian College of Business and Economics, professors John Bruton and Shahid Ansari pushed Longpre to work his hardest, and learn. Professor Ansari had a special way of teaching and distilling complex information to students, Longpre said, and he named Bruton as one of his favorite teachers at CSUN. He also credited Jessica Baty, a communications professor, with teaching him leadership and communication skills, a crucial skillset he uses today.

“I had a really good back-up plan. Unfortunately, a lot of players don’t have a back-up plan like that,” Longpre said. “I’m really grateful for my education at CSUN. I thought the business school [was] very underrated. The way that they prepared me for the business world, especially with the focus in finance, was really helpful when I went into the business world.”

With all that’s changed in recent weeks in the U.S. and across the world — including a stock market correction and massive hits to the economy — Longpre has seen dramatic changes in his work, he said.

“Our entire firm across the country has moved to working remotely, and it has drastically changed the way we do business,” Longpre said. “Client meetings are now handled via conference call or Zoom, and we are dealing with a surge in volume across many segments of our business while simultaneously seeing a reduction in productivity.

“These are definitely challenging times for many businesses, but it is also a reminder of our humanity and the collective good that we can do when we come together,” he continued. “I’ve seen a lot of good happening, and I think we will emerge from this stronger and better prepared for the future, from both an economic and social standpoint.”

Longpre is still connected to CSUN in a variety of ways. He has followed his alma mater’s push for and commitment to sustainability, and Longpre said it’s been important to him to carry this into the financial sector.

“[Sustainability] is one thing I’ve always been passionate about — this is relevant to CSUN, too,” said Longpre. “To me, that is the combination of your philanthropy, your values, what’s important to you as a person — whether it’s the environment, gender diversity, education or animal rights, whatever your values are — and linking that with what you invest in.”

Longpre often reflects on his time as a Division I student-athlete. His combination of experiences on the field and in the classroom prepared him for the real world.

“Just like in baseball, and just like in the business world, you’ve got to find what makes you different. If you do what everybody else is doing, it’s not a recipe for success,” Longpre said. “My advice to anybody going into business or finance or any industry is, find a way to differentiate yourself. Find a way to innovate, and be unique and stand out in a positive way.”