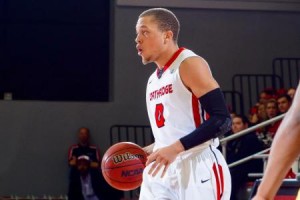 CSUN men’s basketball guard Josh Greene excels both on the court and in the classroom.

On the basketball court, Matador junior guard Josh Greene wears number zero. However, whether it’s on the court, in the classroom or in life, Greene has been anything but. A scholar-athlete, Greene has had an amazing 2012-13 season, starting it with an All-Big West Honorable Mention and following it up by being recently named one of the 64 athletes to receive the Academic Momentum Award from the Scholar Baller program, in conjunction with the National Consortium for Academics and Sports (NCAS).

The Scholar Baller program looks to highlight those student-athletes who excel at every academic endeavor, and Greene is an example of that. The Recreation and Tourism student entered his junior year with a 3.46 GPA and has gone beyond just focusing on getting good grades to also do charitable work. He has participated with the Student-Athlete Advisory Council (SAAC) to raise funds and spirits during the holidays, along with using his church as a conduit to specifically help the hungry in the Los Angeles area.

“Academics and contributing to the community are very important to me,” Greene told GoMatadors.com. “[CSUN men’s basketball coach Bobby Braswell] and my mom have always stressed the value of academics. Whenever you have a chance to help people who are in need, that’s important.” It’s this type of personality that has endeared him to everyone on and off the court, especially one of the people who watched him grow over the past three years.

“I have had the privilege to coach Josh Greene the past three seasons,” coach Braswell said. “During that time, he has transformed into a mature, young adult…  Josh’s academic progress and momentum showed a direct correlation to his personal growth and development as a young man.”