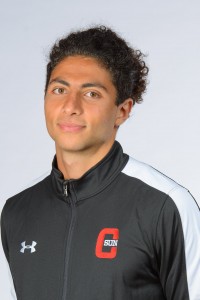 CSUN scholar-athlete Dawoud Mishal is a sprinter on the Men’s Track and Field team, but when it came to choosing a college, he took his time. In the end, though, it was an easy decision.

The 20-year-old film major, now in his junior year, was drawn to CSUN’s Department of Cinema and Television Arts in the Mike Curb College of Arts, Media, and Communication, as well as to the university’s acclaimed Track and Field program.  Another deciding factor in his college choice? CSUN’s mascot.

“I’m a Taurus, my sun sign is a Taurus, so having the Matador as the mascot is like taming my own bull,” he said. “[My] gut feeling said, ‘this is the right decision,’ so I went with that.”

Dawoud has not regretted the decision. He’s had many successes since he came to CSUN. And this month, the university honored him with its highest recognition of student achievement — as CSU Trustees’ Scholar. One student from each of the 23 California State University campuses was selected for the honor. The awards, that are given annually, provide donor-funded scholarships to students who demonstrate superior academic performance, personal accomplishments, community service and inspirational goals.

In July, Dawoud also was named to the Big West Spring Academic All-Conference Team. In May, he was named one of CSUN’s Scholar-Athletes of the Year. He says he’s learned a lot about himself since starting at Northridge as a freshman, after graduating from San Diego High School.

“I’ve been able to discover who I am, what I enjoy,” Dawoud said. “There’s a lot of diversity on campus, so I got to discover the people I’d like to spend my time with.”

In the nomination letter, Dawoud was described as a person who gives without hesitation to those around him, in an altruistic manner. He regularly offers his home, meals and support to teammates and friends in need. Last summer, while working at a restaurant job in his hometown of San Diego, he distributed leftover food to the homeless after his shift. In 2018, he spent a month volunteering with a humanitarian organization in Amman, Jordan, working with Palestinian and Syrian refugees.

The scholar-athlete, who spent part of his childhood in Jordan, wants to write and direct his own films and foster a better understanding of the Middle East, he said.

“The country there (Jordan), it’s very sweet, very welcoming,” he said. “A lot of unconditional love is present there, and I’d like to [shed] more light on that.”

He sees the scholarship as more than help for his immediate financial needs, but also as a foundation for his future, Dawoud said.

“I’m not just going to take it and spend it all,” he said, “I’d like to start something, find a way for it to help me generate more and to do more and have more.”

The CSU Trustees scholarship program was established in 1984 by the William Randolph Hearst Foundation and since has been supplemented with contributions from private donors, the CSU Trustees and CSU Foundation board members. The awardees were recognized at the Sept. 13 CSU Board of Trustees meeting in Long Beach, followed by a special reception.