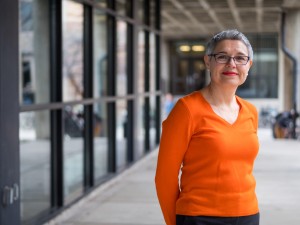 (Photo by Patrick Campbell/University of Colorado)

Lupita Montoya ’89 (B.S., Mechanical Engineering) emigrated from Mexico to Los Angeles when she was 16. Her mother, a former garment district worker, sent for Montoya in 1981. After just a few short years, she graduated from high school, enrolled at CSUN, and found her true calling. Montoya went on to earn advanced degrees in engineering from Stanford and complete postdoctoral training in Public Health at the State University of New York and Harvard.

This summer, Hollywood shined a spotlight on Montoya’s area of expertise — in an industry American consumers know well: the nail salon industry. On April 14 of this year, HBO Max released a docuseries, “Not So Pretty,” which explores the dangerous chemicals used in cosmetics that can pose a threat to consumers and workers alike. The series’ episode that focuses on nail polish and the nail salon industry used Montoya’s extensive research on the topic.

Montoya, who conducted most of her research at the University of Colorado, Boulder, recently moved back to California and started a year as a Fulbright U.S. Scholar at the Universidad Autónoma de Baja California (UABC), in Tijuana. She is working with colleagues in the School of Chemical Sciences and Engineering to evaluate and mitigate indoor air pollution in laboratories in the School of Dental Medicine at the UABC.

CSUN Today recently spoke to Montoya about the documentary, as well as her thoughts on women and Latinas in STEM and how her experience at CSUN helped shape her career.

How did your time at CSUN impact your education?

I came to CSUN as a chemistry major, where I lasted about a month, because I was recruited into the Minority Engineering Program, which is a big part of my story here. I loved my experience in MEP. Initially, I thought I was going to transfer to UCLA, my dream school, but I never did because I really liked it here.

One important fact is that I really like learning, and I had the opportunity to try different things at CSUN. When I got into engineering, I took classes in different engineering disciplines. I liked it all! As time went on, I decided to major in mechanical engineering, but the general engineering training I initially received has been really helpful to me. I am a very multidisciplinary thinker, so the more tools I have, the bigger the problems I can solve. That’s what I do for a living: I solve problems as an engineer. My CSUN beginnings really molded the way I think, and I like moving from one field to the next. Frankly, that’s where I like to be: in between fields.

My bachelor’s and master’s degrees are in mechanical engineering, but my Ph.D. is in environmental engineering. Even my decision to move into environmental engineering has its inception here at CSUN. That story began with my year-long Senior Design project, which focused on converting a regular car to run on an alternative fuel. It was a long time ago, ’88 – ’89. I was the only female on a team with maybe 14 or 15 guys. In my senior class, there were only four women, and I was the only Latina. Part of the project was testing the emissions from the car when we made changes to the engine or the fuel. The emissions testing was the part that really interested me. I thought to myself, ‘I want to know more about this!’

Why did you choose to go into STEM?

I think it was just something that naturally appealed to me because I always want to know the why and the how. It is a very scientific way of thinking. And the integration of mathematics into this thinking lets me go from ‘now I know what’s going on’ to ‘now I can predict what’s going to happen.’ With engineering, science is just the basics [that are] used to understand what’s going on, but an engineer can then take that knowledge and put it into some formula or model, and then use that to predict what’s going to happen. That is very powerful. Because understanding the past or how things happened is good, but it is more powerful when you can design systems or products to make things happen. Engineering is something that I think can be undervalued by many people, because of the lack of understanding of what it really is.

How do you think schools and teachers can recruit more students into STEM fields?

It can be [a] career for more people if we explain it in a manner that really shows the excitement of it and the power that is hidden in those tools.

Why do you think there are so few women and people of color in STEM?

Sometimes, people are discouraged from studying these fields at a young age. That happens to women and people of color far too often, in my view. It happens to me to this very day. I just don’t buy into it. I’ve had to fight it my entire career, and I want to fight it for our students. That is why I stayed in academia: so that I could get more people to think that these possibilities belong to everyone. Those who get in the way of this progress do a great disservice to STEM and to society. I have faced many people like that, but fortunately, there are ways around these obstacles. When you address issues in our communities or when you come up with new ideas no one has even thought about, you show by example. A lot of times, you have people telling you that you “cannot” or “are not” this or that…But if you go out and do it anyways, they cannot say it anymore. You show them otherwise and dispel the myth.

What are you currently working/focusing on now?

Young people, the newer generations, I think, are my mission now. I also continue to perform research with disadvantaged communities. I’ve had all kinds of people and obstacles in my way, and I have overcome them. Most of them, anyways. Sometimes, people just won’t budge no matter what you do. But that shouldn’t take away from your excellence. There is a lot of strength that must be within you, especially when you know you have the knowledge and you have a mission. I think this is a wonderful calling: to be able to create something that never existed and do it for the betterment of others. You can do that in engineering.

Why is it so important for Latinas to be included in STEM?

Because we are being left out of most of the science that is being done, and our excellence is not included or reflected. Our perspectives are not included. We can address problems other people cannot even see. And even when others attempt to solve them, they don’t have the right tools. So, that’s a part of the kind of work I do as a scientist — focusing on problems where I have more tools than other people.

The filmmakers were interested in my experience as a scientist working with a disadvantaged community, like nail salon workers. It was not surprising to them that I had difficulties getting support for this type of research, including at my institution and especially as a Latina scholar in engineering. Apparently, they had witnessed a backlash against whistleblowers in their other documentaries (e.g., “The Hunting Ground,” an exposé of rape crimes on college campuses).

When I learned about their previous work, I was reassured that they would be serious about this issue, as well. They were interested in understanding the motivations, as well as the limitations, of my study. It seemed to me that they shared my goal of supporting these communities [immigrants who work in nail salons] and bringing these issues of inequality to light.

As a faculty, I was marginalized for doing this type of research, but as a member of a minoritized community, I still feel I have a responsibility to use my expertise to support these people. I saw allies in the filmmakers, so I was eager to contribute to this documentary. We filmed in Colorado and in California during the pandemic. It was an interesting extension of the challenges we both face with our work.

How long have you been researching indoor air pollutants?

I have been studying indoor air pollutants for about 30 years and adsorbent materials for around 20 years. I have been working with flow-control methods for almost as long. These have been separate lines of research I have conducted with different types of students because they require different sets of skills. In my mind, however, they have always been part of a cohesive plan to address indoor air pollution in multiple settings, ranging from poor housing to “smart” buildings. This is the beauty of conducting fundamental research but being driven by a desire to impact society in meaningful ways through applied research. I used these tools to study nail salons in the last eight years or so, but the fundamental research started decades ago.

Are you continuing the research?

Yes, I am continuing the research featured in the documentary. As a Fulbright U.S. Scholar at the Universidad Autónoma de Baja California in Tijuana, I will be working with colleagues in the School of Chemical Sciences and Engineering to evaluate and mitigate indoor air pollution in laboratories at the School of Dental Medicine and potentially local businesses.

I am also teaming up with faculty in the College of Fine Arts to continue developing the “air cleaning art” I have been working on for a while. The goal is to bring these different research spheres together to solve an important indoor air pollution problem. I love working at the intersection of fields, where I best leverage my strengths. I love bringing people together for good causes.

What advice do you have for women and Latinas who want to pursue careers in STEM or are even hesitant to join STEM?

My advice for young people, especially women, is that STEM fields need your perspective. If you really want to solve problems, especially the more complex ones, you must believe that you are needed. Solving these sorts of problems requires a diversity of thinking. Having only people who think the same way or want to do everything the same way is not conducive to excellence or good problem-solving. We can already see the outcomes of this lack of diversity in STEM. We see the lack of diverse perspectives and poor solutions. Why do our communities of color have so many problems, including in this pandemic? Because people are coming up with solutions that don’t work for our communities. So, women need to be involved. People of color need to be involved. Because the answers lie with us. If I want to solve a problem in the Latino community, for example, the fact that I am part of that community, that I know the language, I know the culture, and I respect them, in addition to having the scientific and technical expertise to tackle the problem, then my solution will be more appropriate and complete. These additional skills I bring to the table are advantages that people in the past have sold as disadvantages. I want to encourage young women and people of color to get degrees in STEM fields so we can tackle all the important problems that go unaddressed in our communities because we are not there to do it right.

I want young women and Latinas to know that they are needed in STEM.