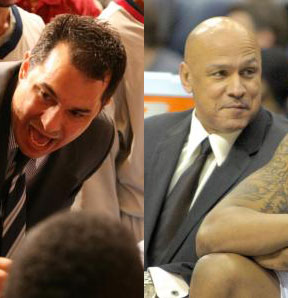 Reggie Theus’ hire in April as California State University, Northridge’s men’s basketball coach was met with much fanfare across the college basketball landscape. As the season approaches, Theus is busy recruiting both athletes and coaches to prepare to meet those expectations. He’s recently made two additions to his coaching staff that shows he’s looking to the past and the future of CSUN men’s basketball.

The past is represented by Jason Levy ’93 (Leisure Studies & Recreation), a former Matador basketball player who has been coaching college basketball for the past 19 years. His last position was local with Loyola Marymount University.

“This is something I have always thought about, but thought would never happen (his return to CSUN),” Levy told GoMatadors.com. “For me to get a degree from Cal State Northridge and to be able to coach here is a great honor. I can’t express enough how excited I am to be able to work with Dr. Brandon Martin (Athletic Director), who I watched play at USC, and with Coach Theus who, I watched play for many years in the NBA. This is truly a dream come true.”

Theus took a page from his past to write his future with the hiring of Chris Pompey, a former assistant during his days coaching the University of New Mexico men’s basketball team. Pompey comes to CSUN after three years at Seton Hall University, which plays in the Big East, one of the strongest conferences in college basketball.

“I am excited to be reunited with Coach Theus,” said Pompey. “I look forward to working and building something great under the vision and direction of CSUN President Dianne F. Harrison and Athletic Director Brandon Martin.”