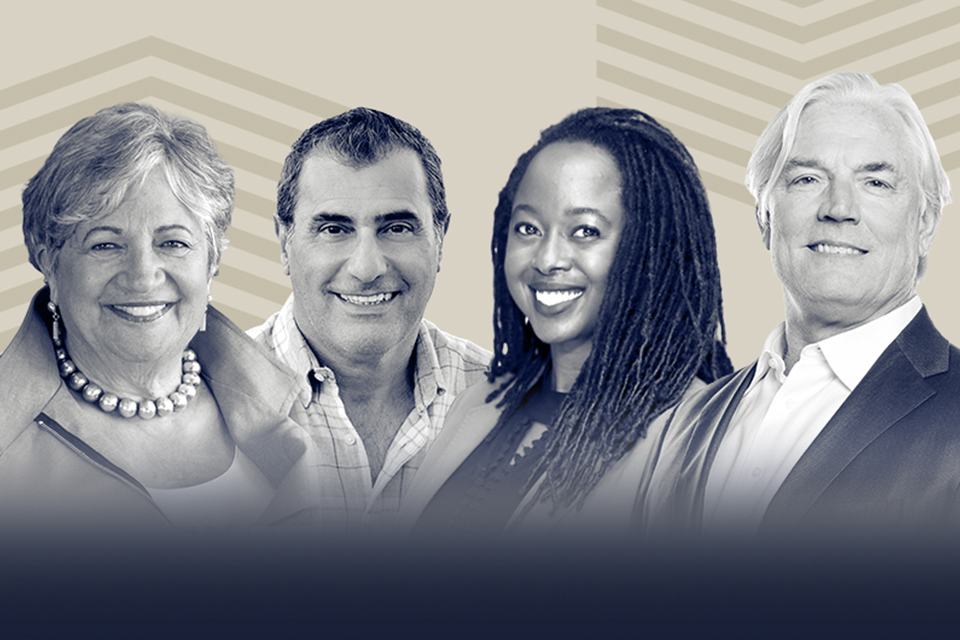 Sustainability efforts are changing the way businesses operate, and CSUN alumni are leading efforts to drive innovation in renewable energy and carbon reduction.

On March 24, CSUN’s David Nazarian College of Business and Economics invited a panel of alumni to discuss their work in these areas and explore “The Business of Sustainability” in the latest virtual installment of its Distinguished Speaker Series. The panelists, whose careers include renewable energy startups and international sustainability efforts, talked about the economics of sustainability — including areas of potential growth and why costs will go down as more organizations adopt green technology.

“It was a pleasure to have our alumni return and speak to our students on such an important topic that is revolutionizing the way we do business,” said Chandra Subramaniam, dean of the Nazarian College. “It is important for us to connect our students with industry professionals that can broaden their horizons and inspire them to pursue their career goals. This panel of alumni did just that by showing our students different paths into the same field. ”

The event’s moderator was Mary Nichols, former chair of the California Air Resources Board, who has been dubbed “The Queen of Green.” Nichols also was named among the 100 Most Influential People in the World by Time magazine in 2013, when the magazine lauded her as “the Thomas Edison of environmentalism.”

“I was taught that the core definition of sustainability involves equity and economy and environment,” Nichols said. “The three Es are all bound together and, to be sustainable, we need to be considering all three of those things.”

The event provided an opportunity to discuss achieving decarbonization, the process of moving away from the use of carbon as a resource, and the tenets of sustainability. The panelists discussed the economic and social incentives for finding low-carbon energy solutions, including initiatives put forth by governments around the world.

“We’ve arrived at a point that there’s no going back, that low-carbon energy is a must for sustainable development and is now recognized by all corporations [as the required path] for achieving economic goals and sustainable high-living standards,” Mahdi said.

The sustainability efforts by Clean Energy Technologies, Mahdi’s company, include turning “waste heat” from a variety of sources into power and energy, both processes in which otherwise-wasted heat is captured to create electricity. In China, which Mahdi has said is “the biggest market for clean energy,” he and his team are working with government leaders to build a carbon-neutral city that he hopes can be replicated in many other places.

Jennings pointed out that his current work, installing EV charging stations in apartment buildings, is important because “there’s a lot of efficiency to go around, which should translate out to reduced transportation costs.” Jennings also compared transportation to telephones, noting that the phone was expensive to use when it was first introduced but is now widely accessible.

“Transportation is no different,” he said. “The cheaper transportation gets, which electrification will bring, the more accessibility people get and the better our society does.”

James said she’s a “geoscientist at heart.” She’s done research on Catalina Island, worked for the U.S. Department of the Interior and taught as a professor prior to her current high-level role at Microsoft. She circled back to equity, economy and environment to note that Microsoft believes “that for this transition to take place, it has to be equitable,” and “when the world does well, Microsoft does well.”

Years into their careers, the three alumni said they still use lessons they learned at CSUN.

James ties her skills and success back to her degree in geoscience from CSUN, citing the influence of her advisor, geological science professor Kathleen Marsaglia.

Jennings said his time at CSUN sparked his entrepreneurial spirit.

“What made me an entrepreneur was the ability to take basic economics and understand how to monetize it, and I would say those skillsets I absolutely learned at Northridge,” he said.