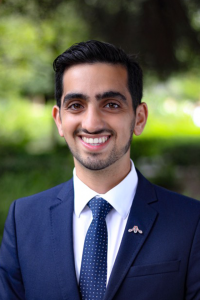 On Dec. 7, CSUN showed its support for the more than 4,000 Jewish students, faculty and staff at the university, as student government Associated Students (AS) passed Senate Bill 2020-21-006, which condemns any and all forms of anti-Semitism on campus.

The resolution, spearheaded by AS Senator Jonathan Hay, adopts the International Holocaust Remembrance Alliance’s (IHRA) official definition of anti-Semitism, as “a certain perception of Jews, which may be expressed as hatred toward Jews.”

“Anti-Semitism is a very broad topic that can be defined in so many different ways,” Hay said. “[Adopting a definition in the resolution] applies action ability to the word. The essence of the bill is to show alliance with the Jewish community and allow future leaders to be able to call out anti-Semitism when it’s needed.”

By defining anti-Semitism in a university-wide document, Hay and fellow AS Senator Zachary Schimke said they hope to see concrete ways for AS and CSUN to fight discrimination against Jews on campus.

“My personal hope for the resolution is that it will give AS a form of a test that they can use in the future to clearly identify anti-Semitic acts, name them as such and respond to them accordingly,” said Schimke, who co-sponsored the AS bill.

Hay said the senate bill represents “more than just a resolution.” It expresses “the stance of CSUN taking anti-Semitism seriously.”

Along with condemning anti-Semitic acts on campus, including the December 2018 threat of a mass shooting, when a swastika was found graffitied in Sierra Hall, the bill also denounces hostilities against the wider Jewish community. These included attacks at Tree of Life Synagogue in Pittsburgh, the Poway Synagogue near San Diego and the Chabad of University of Delaware Community Center.

“The Jewish community is truly blessed to have California State University, Northridge as a dear friend and partner,” said Matt Baram, executive director of Hillel 818, an organization and community center that represents the Jewish communities of CSUN, Pierce College and Valley College.

“At many universities, resolutions like this have received pushback and been enveloped in controversy,” he added. “At CSUN, this resolution was emphatically passed with barely a peep. [Former] President Dianne F. Harrison has always been a great friend to Hillel 818 and the Jewish community at CSUN, and we are excited to create an equally close relationship with President Erika D. Beck. We are so proud of students Jonathan Hay and Zachary Schimke for taking the initiative to get this resolution passed. Jews throughout Greater Los Angeles should know that CSUN is a wonderful place to be Jewish.”