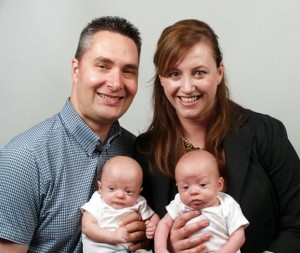 Shane Frehlich poses for a photo with his wife Dianne and twin boys, Miles and Maximillian. Photo courtesy of Dianne Frehlich.

Shane Frehlich is the department chair of kinesiology at CSUN. He’s a dad to twin boys — Miles and Maximillian — and husband to Dianne. He is also currently battling Acute Myeloid Leukemia (AML), a form of cancer that attacks bone marrow. As a show of support, members of his department took a swab test to see if they were matches for his marrow type, which would allow them to donate toward his recovery. “Be The Match,” the National Marrow Donor Program that registers possible donors and did the tests, are they’re coming to CSUN on Sept. 18 to test additional possible donors.

Their entre to the campus was the brainchild of Dino Vrongistinos, kinesiology department undergraduate coordinator, and professor Doug McLaughlin. The two thought of it after swabbing themselves and registering with the program.

While their thoughts were with Frehlich as they organized the event, the organizers also knew that the drive could help patients other than their department chair. The process — swabbing your cheek for tissue, which will be checked by doctors all over the world — opens up more avenues for people dealing with all blood-borne diseases like leukemia, sickle cell and lymphoma.

Frehlich, who has been at home between radiation bouts, is checking in occasionally with his colleagues. He has also been writing on his blog, Hope 4 Shane, about his ups and downs trying to find a donor. However, when informed about the drive on campus, Frehlich immediately posted how moved he was by the work his friends were doing — for him and others.

“It is my hope that the CSUN drive on Tuesday brings in as many potential donors as possible,” he wrote on his blog, “especially for those patients who come from historically underrepresented groups in the registry. Trust me, if a match is found for me I will be eternally grateful… but I’d be just as grateful to know that matches were found for other people as well.”

Be The Match testing will be conducted at the West Patio Redwood Hall on Tuesday, Sept. 18, from 10:30 a.m. to 4:30 p.m. Those who cannot make it can register by going to join.bethematch.org/hope4shane.