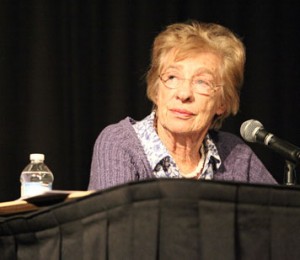 A university setting offers, among many things, an opportunity to learn from the past while preparing for the future. Last week, Eva Schloss—Holocaust survivor and Anne Frank’s stepsister—came to the CSUN campus to remind us of the unfortunate history she and many others had to live through.

Schloss told her tale of heroism to a packed room in the University Student Union.

The night began with a memorial service for the sx million who died during the Holocaust. Schloss then spoke about her time growing up in Austria before the Nazi occupation split her family apart and sent her to the infamous Auschwitz concentration camp.

Schloss also talked in detail about her relationship with Frank, who chronicled her life for two years with her family during the Nazi occupation of the Netherlands in her posthumously published journal, The Diary of Anne Frank. Schloss’ mother would later marry Otto Frank, who had kept the diary during his time in a concentration camp. The two families had known each other before the war in Vienna.

“We were definitely not best friends,” Schloss said. “I was a tomboy but Anne was into her hair, fashion and film stars.” Schloss talked about how her mother would eventually help Otto Frank prepare and publish The Diary of Anne Frank in the hopes of using it as a way to explain the horror of what went on during the Nazi occupation. It’s a point Cynthia Mazouz, a CSUN senior who serves as vice president of the Chabad board that held the opening memorial, understands all too well.

“It humbles you to the point where you realize the difficulties we face everyday are no comparison to what happened in the Holocaust,” Mazouz told the Daily Sundial‘s Megan Diskin.