Latino/a/x Heritage Month, also known as Hispanic Heritage Month, is an annual celebratory month from Sept. 15 to Oct. 15. The month focuses on highlighting the influences and contributions of Hispanic and Latin American individuals in the United States. It is a time for many to honor their heritage and often prompts discussions about identity. Who is Hispanic? Who is Latino/a/x? What does that mean? Some say it is anyone who originates from a Spanish-speaking country, while others argue that there are deeper political and cultural meanings. A newer term, “Latinx,” has been introduced to include non-binary and gender-nonconforming, as well as those who originate from non-Spanish-speaking countries, such as Brazil.

We interviewed eight CSUN students about how they identify themselves, and more importantly, what their identity means to them. 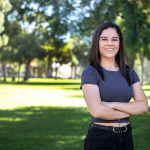 Priscilla Lara, 23, Mexican-American: Born and raised in the United States, Priscilla Lara, a second-year graduate student in mass communication, has a strong affinity for her Mexican heritage.

“In the house, we communicate just using Spanish. {What} we eat is usually just like Mexican food, our customs, our traditions, everything just revolves around that culture, so I feel like literally being Mexican, it’s like everything for me. It’s how I present myself, the way I dress, the way I speak, everything.” 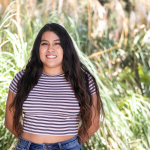 Annely Hernandez, 22, Guatemalan-American: Annely Hernandez, a third-year sociology student, takes pride in her Latina identity.”[Being Latina] is a reflection of me. I have brown skin, I have Latina features, so I feel like it’s very important to me.” Hernandez credits Latinx Heritage Month for showcasing other Latinas and their impact on American society, as well. 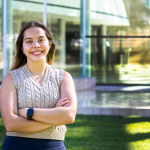 Beatriz Barros Felice, 22, Brazilian:  As a Brazilian native, Beatriz Barros Felice speaks her country’s native language, Portuguese. While the first-year graduate student in mass communication only identifies as Latina, she appreciates the unification between Brazil and other Spanish-speaking countries.

“I don’t feel that there’s much of a difference because we feel like one, we’re all located in the same place,” Barros Felice said. 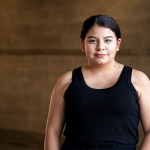 “I was born in Mexico. Being able to kind of bring that culture from where I was born to [Los Angeles] really makes me happy,” Santiago said. 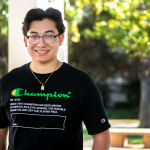 Montalvo says, “I think people should just know about how hardworking we are, and how passionate… [These are] some of the hardest working people that I know, and they deserve to be recognized and taken seriously.” 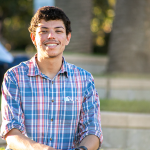 Sebastian Artola, 24, Salvadoran-American:  Self-identifying as a Latino is just one dimension for Sebastian Artola. Raised by a Salvadoran mother in America, Artola, a second-year graduate student in mass communication, has clear ambitions.

“For me, being Latino just means making my mark, as a minority, especially in a lot of the fields that I work in, specifically, education. There aren’t a lot of male Latinos in education, especially in higher ed.” 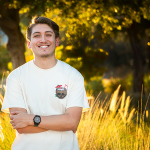 Will Argueta, 21, Salvadoran: To break patterns Will Argueta has noticed in the Hispanic community, the fourth-year game design student confidently identifies as Hispanic to encourage discussion.

Jordy Dominguez, 29, Mexican-American: If there was a hierarchy to rank his identity, third-year business management student Jordy Dominguez would say, Oaxacan, Mexican, Latino. However, Dominguez most deeply connects to the term “Oaxacan” and feels it encompasses the rich diversity of his heritage.

“I trace my roots back to Oaxaca very strongly just because they have a very strong culture that’s separate from the rest of Mexico, because Mexico is very diverse.”