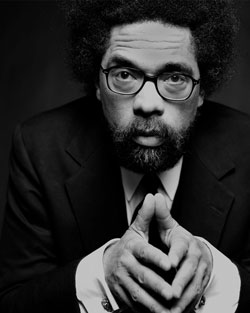 The fatigue of dealing with hate can be helped by turning inward and toward the best traditions of the Black community, said renowned philosopher, political activist and author Cornel West.

In a virtual discussion with the CSUN community on Feb. 26, West sounded at times like a poet and a preacher as he quoted Bible verses and pointed to the great Black musicians, writers and intellectuals whose works can provide a balm for low spirits and help frame the way Black individuals see themselves.

“We’re a world historical people,” West said. “Our gifts to the world have been disproportionately influential because we have been willing to be freedom fighters, wounded healers, and then we’ve been hated for 400 years. Hated so intensely, and yet we keep dishing out love warriors. Here comes John Coltrane, ‘A Love Supreme.’ Here comes James Baldwin’s love-soaked essays. Here comes Marvin Gaye’s ‘What’s Going On,’ another love-soaked album. Here comes Toni Morrison’s genius, ‘Beloved.’ Here comes Gwendolyn Brooks. It goes on and on.”

The discussion was the culminating event in a month of Black History Month events held by organizations and departments across campus. The event was part of a series of conversations known as “Essential Talks,” which developed in 2020 during the fight for racial justice that intensified following the deaths of George Floyd, Breonna Taylor and many others.

“The events of the past year have brought into stark focus the challenges that our Black communities continue to face in fighting systemic and entrenched racism,” said CSUN President Erika D. Beck, who greeted West along with Vice President for Student Affairs and Dean of Students William Watkins, and Library Dean Mark Stover. “These events serve to remind us that courageous leadership and action are needed now and required of us all.

“By engaging in discussions like the one we are having this afternoon, we can embrace the call to action, as it provides us with an opportunity to reflect on how each of us can personally facilitate a more just and equitable future.”

West is a longtime Harvard professor and bestselling author of books including “Race Matters” and “Democracy Matters.” He also visited CSUN for Black History Month 10 years ago, appearing at The Soraya just days after its grand opening gala, Watkins noted.

The virtual event was co-hosted by Paulette Theresa-Schechtel, a University Counseling Services counselor, and Keith Rice, historian at the Tom & Ethel Bradley Center of the University Library. The discussion was moderated by Debra Hammond, executive director of the University Student Union, and Theresa White, chair of the Department of Africana Studies.

West was a warm, funny and inspiring presence, with a message that drew from the Bible and the call to stand up for those around the world who are vulnerable. He urged his audience to give of themselves in service of something greater than themselves.

He noted how soul singer James Brown would give famously long concerts, ensuring that every member of the audience went home with what they needed to hear. And West stayed an hour beyond the CSUN event’s scheduled end time to answer questions from students, faculty and staff members.

“I’ve had a magnificent dialogue with the students here at Northridge,” West said. “The high quality questions raised the truth. The critical reflections grounded in serious, serious commitment is highly impressive to me. Something mighty is taking place in Northridge.”

The stress caused by racial aggressions is known as Racial Battle Fatigue — a term coined by University of Utah professor William A. Smith. Student, faculty and staff advocates fighting for equality and justice must deal with it, White noted.

“When I think racial fatigue, I think of the ways in which Black people at times could be just overwhelmed by the sheer insanity and absurdity of white supremacy bombardment,” West said. “All the lies told about Black people, that we’re less beautiful, less moral, less intelligent. All of the crimes committed to Black people, day in and day out for 400 years.”

There are many possible responses to this stress, West said. He focuses on the magnificence of his family and the community that helped him develop a self-respect that can’t be taken away, he said. The artists he turns to when he feels down are examples of the love, community and joy Black individuals create so that “the white gaze is not the lens through which we view each other, or ourselves,” he said.

The choice to live a life of service to others isn’t a function of skin pigmentation, West said — it’s a spiritual choice, and a moral one.