April 22 marks our planet’s 50th Earth Day celebration. To mark the golden anniversary of the environmentally conscious commemoration — while our planet faces its worst public health crisis in a century — CSUN’s Institute for Sustainability looked back for inspiration. To wartime.

The institute’s staff, students and faculty have launched a “virtual victory garden” campaign to grow food at home, open to the entire CSUN community and beyond. Those who wish to participate can sign up online to have free seeds delivered to their mailbox in two to three weeks. The seeds are available to the first 500 recipients, or until the seed supply is exhausted. 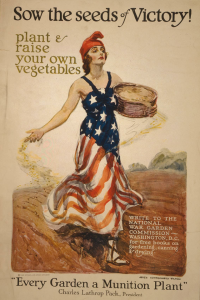 “It maintained that there was nothing more valuable than self-sufficiency, than working a little land, no matter how small, and harvesting your own eggplant and tomatoes.” WWII victory gardens grew approximately 25 to 40 percent of the country’s fruits and vegetables, said Natale Zappia, director of CSUN’s Institute for Sustainability.

“We’re at an unprecedented moment, and we think that it’s a great time to invoke that phrase — victory garden — but also to think about the future, and how we could have a reboot and a pivot to thinking about our food in ways that we have never thought about it before,” Zappia said.

The Institute for Sustainability has partnered with Associated Students, the Center for Community Health and Well-Being, and the Department of Facilities Planning to dedicate the entirety of April as Earth Month. 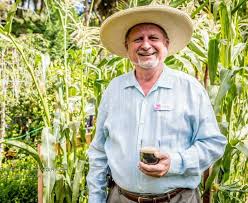 To kick off its celebration of Earth Month, on April 1 the institute offered a webinar taught by master gardener Scott Murray, on how to access the resources needed to join the “Victory Garden Challenge” and start growing food at home.

“The fastest thing you can do to improve your food security is to start this garden,” said Murray, who has been an organic farmer for more than 45 years and a past instructor in CSUN’s popular CSUN-al Gardening series.

Renee’s Garden, a seed distribution company, is providing the seeds at no charge to the institute, who will then send them to participants in the Virtual Victory Garden Challenge. Participants can also attend free online classes on gardening (thus the “virtual” component of the garden challenge) and becoming self-reliant by growing their own food.

The gardens can be set up anywhere and be any size, as long as the plants have sunlight, according to Murray. Even a window sill can be a great spot to start growing herbs and even small crops such as lettuce, he said.

During the webinar, Murray taught dozens of viewers how to construct their own mini-greenhouses, using wood, clear plastic, heating cables and a thermostat to make sure the temperature stays between 70 and 80 degrees Fahrenheit. According to Murray, a garden that produces enough food for a family of five could support more than 60 different plants.

The most essential tools for starting a backyard garden are a shovel, rake and hose, Murray said. People don’t need to go out and buy special soil — they can use the soil in their yards by turning and tilling it with their shovels. They can also make fertilizer at home with the help of earthworms and a space — something as small as a shoebox could work — for compost.

CSUN’s Institute for Sustainability offered a follow-up webinar, “A New ‘Garden Army’: History of Gardening During National Crises,” with Rose Marie Hayden-Smith, author of the book “Sowing the Seeds of History: American Gardening Programs of World War I.” The live webinar took place April 15, with the recording available for viewing afterward. Hayden-Smith does extension education, digital communications and strategy for the University of California. The stage for Earth Day was set in 1962 by author and activist Rachel Carson, who sparked action and awareness about the link between the environment and public health with her book, “Silent Spring.” Earth Day was launched in 1970 by Wisconsin Sen. Gaylord Nelson, who felt the environment should be given the attention it deserved by the media and politicians, after a massive oil spill took place off the coast of Santa Barbara in 1969.

Ronald Eber, a CSUN alumnus and former director of Ecology Action — a nonprofit environmental organization founded in Berkeley, Calif., on the first Earth Day — launched CSUN’s first Earth Day commemoration. Eber also worked to have the CSUN Orange Grove recognized as a historical site. The Institute for Sustainability and Associated Students hope to honor Eber’s efforts by installing a plaque in the Orange Grove in the future.

For more on CSUN’s Earth Month virtual programming, visit https://www.csun.edu/as/earth-month. Members of the CSUN and wider communities who plant victory gardens are encouraged to share their ideas, inspiration and progress on social media, using the hashtags #virtualvictorygarden and #sustainCSUN, and tag and follow @sustainCSUN on Twitter and Instagram, and @CSUN.Sustainability.Institute on Facebook.