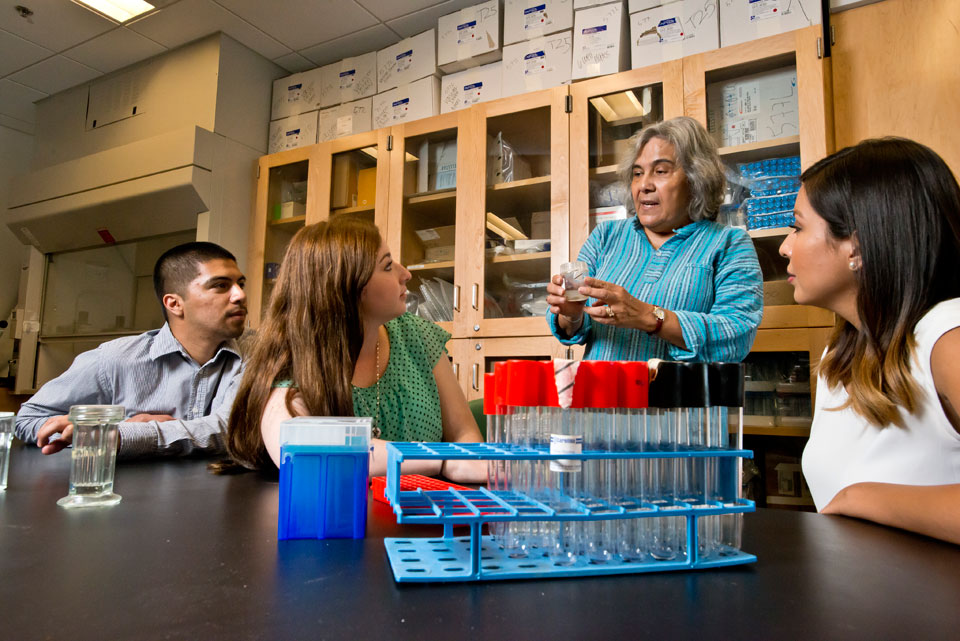 The ASPB is a professional scientific society devoted to the advancement of the plant sciences worldwide. Zavala was named a Fellow in honor of her service to the society and her distinguished and long-term contributions to plant biology.

Zavala said she was surprised and honored to learn she had been named an ASPB Fellow.

“I didn’t even know that my name had been put forward,” she said. “I was at a meeting when I received the call. It is quite an honor.”

Zavala, who has been teaching at CSUN since 1988, is the first Mexican-American woman in the country to earn a Ph.D. in botany. Since coming to the campus, she has played an integral part in building the national reputation of CSUN’s Department of Biology’s as a place where students, particularly those from underserved communities, thrive and successfully pursue advanced degrees at top tier research institutions.

She has served as the director of CSUN’s Maximizing Access to Research Careers Undergrad Student Training and in Academic Research (MARC U-STAR) program since 1990 and Research Initiatives for Scientific Enhancement (RISE) since 1993. Her work as a mentor and advocate for countless students who have gone through these program earned her recognition from the White House. In 2000, Zavala received the Presidential Award for Excellence in Science, Mathematics and Engineering Mentoring from President Bill Clinton.

“When we eat beans, we basically are eating special leaves, cotyledons (seed leaves) that store huge amounts of protein.” she said. “The most abundant of these proteins in beans have low amounts of an essential amino acid that humans need to eat.”

She and her students are working to increase that amino acid — that has sulfur — into the bean seed to improve the nutritional value of beans.

Zavala said plant research is critical in the effort to combat hunger around the world.

“There are more than 925 million people who are malnourished or undernourished in the world right now. That’s a huge number of people (about 1:7 worldwide), and the consequences are tremendous,” Zavala said. “Malnutrition disproportionately affects young children and older people leading to premature death. Infants and young children, who are malnourished often suffer life-long consequences including poor brain development and weak bones and short-term effects including susceptibility to infections because of a poor immune system.

“The world’s farmers grow enough food for every single person to eat the recommended 2,300 calories a day,” she continued. “People should not be starving. The problem is that food isn’t produced where it is consumed, the food distribution system is flawed and much food is lost to pests. The field of plant science has an important role in solving these problems.”