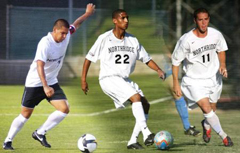 Over the past few seasons, the CSUN men’s soccer team has been on the rise. A big part of that has been the outstanding talent that has been coming through the main gates on Nordhoff Street. Proof of this comes in the form of three former Matadors — midfielders Daniel Paladini and Rafael Garcia, and defender Sean Franklin — who have graduated to the professional level since leaving school. The three are all making their marks in Major League Soccer. Score!