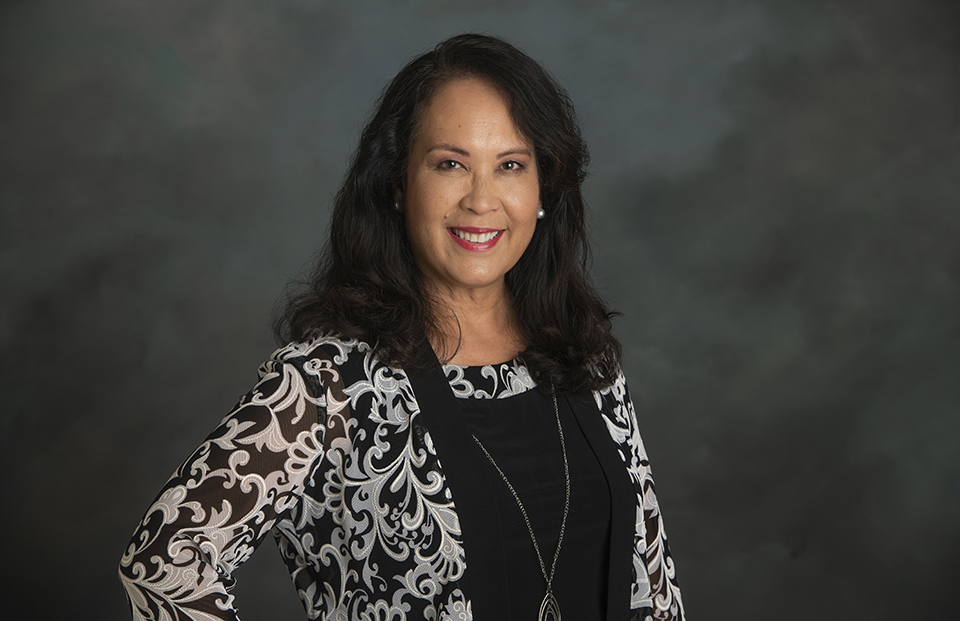 So perhaps it was destiny that led Felicia Sison Conlan ’09 (M.S., Communicative Disorders/Teaching Credential), Ed.D. ’17 (Educational Leadership and Policy Studies) down the long and winding road to this moment: This summer, Conlan took the helm as president of the CSUN Alumni Association — leading one of the nation’s largest alumni families, at 400,000 strong. A speech-language pathologist by training, expert in communicative disorders and Doctor of Education, passionate advocate for Los Angeles schoolchildren and dedicated mom (and proud soon-to-be-grandmother), Conlan is thrilled for the opportunity to lead her fellow Matadors as Alumni president. In fact, as the old saying goes, no grass grows under Conlan’s feet.

In July and August, Conlan jumped into her duties and rallied the CSUN Alumni board members, as they kicked off a new fiscal year and exciting new academic year for the university.

“We have a diverse board of alumni volunteers, including alumni chapter leaders eager to make an impact — especially now that we are back to in-person interactions,” Conlan said.

“I met with each college dean and other campus leaders to listen to their perceptions of the Alumni Association, and to discuss how we can collaborate going forward,” she continued. “The Alumni Association recently moved from a dues-paying model to a non-dues-paying model, so the opportunity to get involved is much greater.” Alumni can join up to three alumni chapters at no cost, and faculty and staff who are alumni can join the Homegrown alumni networking group, she added.

“Our major challenge is, how do you get 400,000 people involved? [Our answer is] MAPS — mentoring, advocacy, professional development, and socializing and networking,” Conlan said. “This is what our Alumni Association offers. We are aligned with President Erika D. Beck’s ‘Road Map to the Future,’ which includes enhancing community connections.

“So many of our alumni live and work throughout Southern California. However, we really would like to get more of our alumni, wherever they are, to be ‘loud and proud’ Matadors,” she said. “We want to hear about and celebrate their achievements. We have many highly successful alumni in various professions who can inspire our students and graduates.”

Conlan recounted some of the many times she’s walked into Los Angeles businesses, wearing a CSUN sweatshirt, only to spark conversations and connections with alumni and students of all ages. “We’re also globally connected,” she said. “We want to engage with more students early on, so they feel a sense of pride in our university and would naturally want to join the alumni network.”

Conlan knows this not only firsthand, but as a Matador parent as well: Her youngest son, Riley ’18 (Communication Studies), played baseball for the Matadors. He now coaches in college baseball. Her eldest son, Brady, served as the director of player development for the CSUN Baseball team and now coaches for a Triple-A affiliate in Major League Baseball.

‘Expanding and Unlocking My Curiosity’

Her own path as a Matador, she said, was less traditional and direct.

The middle child of nine siblings, Conlan was born in the Philippines. Her parents had met in Minnesota, where her mom was a Fulbright Scholar in biochemistry and her father was studying to be an ophthalmologist. Later, the family emigrated to the Los Angeles area.

“I’m an immigrant who grew up in Inglewood. I went to school at UCLA, studying political science, public administration and urban studies,” Conlan said. She was an active campus leader as an undergraduate, and she’s still active in her sorority, Zeta Tau Alpha. “I enjoyed my collegiate experiences and studied abroad, where I learned to become more fluent in Spanish,” she added.

Later, while working as an award-winning TV journalist, she met her late husband, Bobby, who was a director at CBS2 KCAL9 News Los Angeles. The couple married and had two sons, and Conlan left television to be a stay-at-home mom. She actively participated in parent groups and even became a Little League manager and coach.

“My grandmother always said in Spanish, ‘El saber no ocupa lugar,’ which roughly translates to ‘Knowledge doesn’t take up space,’” Conlan said. “A dear friend had suggested I explore speech-language pathology, so I took one class, and I loved it.”

She decided to “go back to school” and enrolled in CSUN’s highly competitive master’s program in communicative disorders. “My education and training prepared me for our broad scope of practice in speech-language pathology,” she said. Conlan juggled raising her children while attending classes. “It was full time, very rigorous and challenging,” she added.

“I found my brain was just expanding and unlocking my curiosity — I learned about neuroanatomy, early child development, hearing science, speech and language disorders across the lifespan, and so much more,” Conlan said.

She landed a job as a speech-language pathologist with the Los Angeles Unified School District (LAUSD). Working in schools, Conlan unlocked her true passion.

“Every day that I go to work, there’s the possibility I can make a difference in the life of a child,” she said. “The joy in their face when they gain the ability to finally say something they’ve always wanted to say is incredibly rewarding. I really enjoy getting a chance to work with kids.”

Conlan became president of the CSUN Communication Disorders and Sciences (CDS) Alumni Association shortly after graduating from the master’s program. She was recognized with the CSUN Alumni Volunteer Service Award, the CDS Alumni Chapter Distinguished Alumni award, and as Chapter Leader of the Year.

She cherished the opportunity to help the chapter grow, Conlan said. From there, she got involved in the statewide professional association, the California Speech Language Hearing Association, as well as the national American Speech-Language-Hearing Association.

As it turned out, CSUN — and its classrooms and labs — were not done with her.

“One of my supervisors had gone through the Ed.D. program at CSUN and recommended it,” Conlan said. During a difficult period (after the death of her husband), she completed her doctoral work in Educational Leadership and Policy Studies.

“It was tough losing my husband, but I felt inspired and determined to become Dr. Conlan,” she said.

With the support of her family and mentors, Conlan persisted. Her dissertation examined college club-sports athletes and their return to school after a sports-related concussion — a significant issue facing student-athletes and their families. She has presented internationally on the topic with colleagues from CSUN and other CSUs.

“CSUN has been a place where I’ve gotten a lot of support, a chance to develop my sense of self, and to partner with people who have enlightened me on what’s possible. The professors want you to succeed,” she said. “Now, as president of the CSUN Alumni Association, I have this honor to carry on the legacy of outstanding predecessors and to build and nurture relationships across generations.”

Following the example of “giving back” set by her parents and her family, Conlan said, she is excited for what this two-year term as Alumni president will bring.

“We are truly elated about partnering with the CSUN Foundation Board to engage more alumni. Matadors can be found everywhere, and this is a call to action,” Conlan said.

“We are looking for our alumni to be the difference makers, the change makers, the thought leaders and innovators,” she said. “You know who you are: Business leaders, community leaders, CEOs — we need your help to invest in CSUN, to help us build and grow and enhance the student experience and thereby create a viable, vibrant and vital community to solve local, regional and global challenges.

“CSUN was an opportunity for me to grow as a returning student,” she reflected. “Now I’m giving back my gifts, as Shellie Hadvina (CSUN associate vice president of alumni relations and development) would say — you can give your time, talent or treasure.”

In the case of this CSUN-destined Sison (Conlan), it seems to be all of the above.