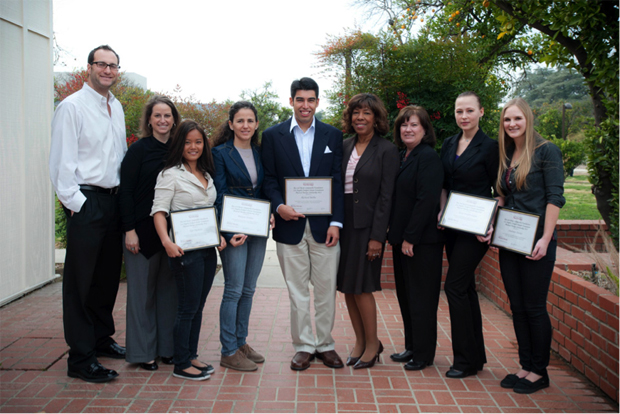 Richard Barba told faculty that receiving the Roy Campanella Scholarship is a tremendous honor for both his family and himself and that he was a Dodgers fan even before he was born. “Friends and family are very important to me,” Barba said. “I want to help people enjoy a greater quality of life so that they can continue to make lasting memories with their friends and family. Thank you for the generosity of the Campanellas and Dodgers and this opportunity to become part of the Dodger family.”

Barba’s long-standing relationship with CSUN began with his involvement with the Future Scholars Program while he was in middle school. During high school, Richard participated in the Step to College Program and completed two college level courses at CSUN. He says that as a Latino student, he is very proud and honored to be the first in his family to attend graduate school and that he is thankful to be a part of the CSUN Physical Therapy Department.

“I want to thank the Roy and Roxie Campanella Physical Therapy Scholarship Foundation and the Dodgers,” said Yana Brailovskaya. “To me, this scholarship is not just a financial assistance, but this is also a reminder of the importance and impact a physical therapist could bring to one’s life. I am deeply honored to receive this award. In turn, I promise to uphold to the highest standards of our profession and to make a difference in my patients’ lives.”

Brailovskaya was born in Ukraine and moved to Los Angeles at the age of thirteen. Her interest in physical therapy started right after high school during rehabilitation from a shoulder injury. Yana majored in Kinesiology at CSUN with the ultimate goal of eventually becoming a physical therapist. Throughout her undergraduate years, Yana participated in multiple events, including training community members to run the LA Marathon, working with elementary school kids at Riverside Elementary, and working with CSUN employees to improve their workspace ergonomics. Currently Yana is a vice-president of the second year physical therapy students.

“Thank you to the Campanella Foundation, the Dodgers and CSUN PT department for providing opportunities to my classmates and me to be recognized for our hard work and commitment to our communities while working to become great physical therapists,” said Shannon Davies. I really look forward to having a career in physical therapy, which reflects the compassion, motivation and support that the Campanella Scholarship represents.”

Throughout her college education, Shannon has been involved with her community’s parks and recreation aquatics program, which led to her current work with youth sports. As a second year student in the CSUN Physical Therapy program, Shannon has worked with the basketball and baseball teams in the CSUN athletics “Prehab” Program, helped conduct workshops for Japanese physical therapy students visiting CSUN and attended the APTA conference in Long Beach.

“This recognition means a lot to me, and it made me feel even more strong and confident to continue the pathway of my dream, which is becoming a physical therapist and helping others achieve their goals,” said Patiane Freitas.

Patiane was one of Brazil’s top three female skateboarders before two ACL reconstruction surgeries ended her career. She moved to the U.S. in 2006 with the purpose of pursuing a career in physical therapy and is the first member of her family to attend a graduate program. As an undergraduate major in CSUN’s kinesiology program, she had the opportunity to volunteer at the Center of Achievement and also be part of the May 2011 Exercise Expo as an exercise/nutrition advisor.

“This scholarship helps me to further my dream of becoming a physical therapist,” said Kai Okamoto. “Japan’s economy was hard hit with 2011’s devastating earthquake. In conjunction with the rising tuition fees, my parents are struggling to support me financially. Therefore, I am grateful to have been granted the Campanella scholarship to assist in my endeavors.”

Kai grew up in Japan and learned about the profession from her father, who is a physical therapist. Her father often spoke about how physical therapy in the United States was more advanced than in Japan, and thus studying PT in the United States became Kai’s dream at a young age. Kai serves as an interpreter for the Japanese PT student visitations at CSUN every fall. She also serves as a mentor and has started a blog about her journey through PT school to help Japanese students who are interested in studying PT abroad.

About the scholarship: On January 28, 1958, Dodgers legend Roy Campanella began the second half of his life. The three-time National League Most Valuable Player was at the top of his game as he drove to his home in Glen Cove, N.Y. But during the drive, a patch of ice sent his car swerving and transformed Roy from a champion on the diamond to a future champion for people with disabilities.

A quadriplegic as the result of the accident, Campanella eventually regained some use of his arms with the help of physical therapy. He came to see a dedicated physical therapist as one of the most important factors in an individual’s journey toward independence, explained his daughter, Joni Campanella Roan. “The physical therapist makes you feel you can conquer again,” she said.

Roxie Campanella, Campenella’s wife, worked “hand in glove” with her husband to form the Roy and Roxie Campanella Physical Therapy Scholarship Foundation before his death in 1993 and her death in 2004. In 2010, the Campanella family decided the best way to continue the foundation’s work was to transfer its assets to California State University, Northridge. By administering the Roy and Roxie Campanella Physical Therapy Scholarship Endowment and partnering with the Dodgers Dream Foundation, CSUN will carry out in perpetuity what the great Dodger and his devoted spouse began.

Your donations can make a difference: Help other students by contributing to CSUN student scholarships.