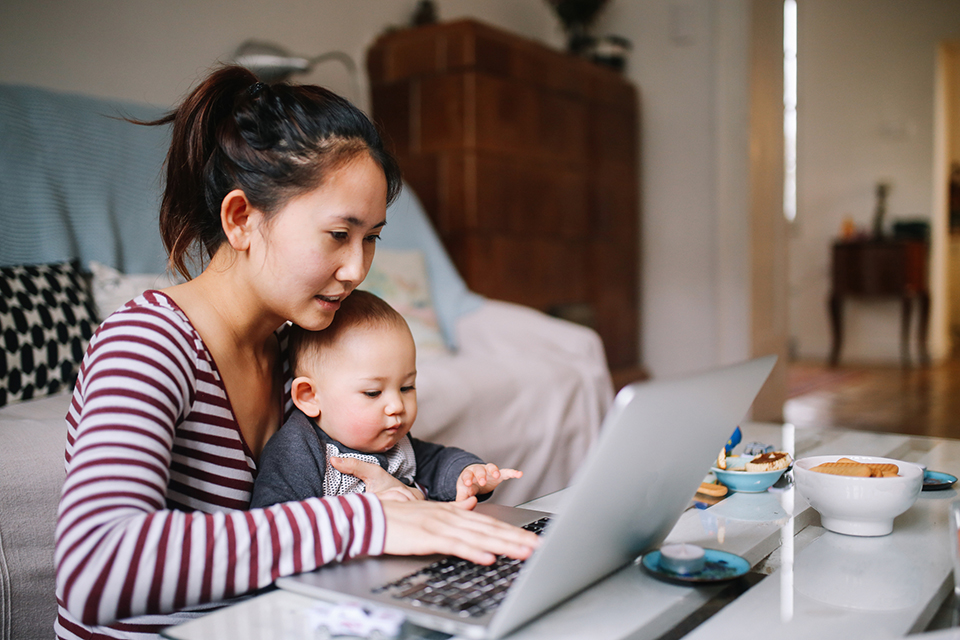 A parent working on a laptop with her baby. Parents of toddlers and young children have concerns about how increased screen time during the pandemic might affect their children’s development. Photo by iStock

Thanks to the COVID-19 pandemic, many day-to-day interactions — such as learning, interacting with co-workers and socializing with friends and family — now take place through computer and phone screens. For parents of toddlers and young children, this has raised concerns about how this increase in screen time might affect their children’s development.

While it may take some time before the effects of this increased screen interaction are known, California State University, Northridge child and adolescent development professor Emily Russell asserts that this isn’t necessarily all bad.

“If you look at some of the better children’s television programming like ‘Blue’s Clues’ or ‘Daniel Tiger’ or ‘Dora the Explorer,’ you’ll notice that built in is an encouragement for the children to talk at the screen,” she said. “What they’re trying to do is elicit that interaction.

“The benefit of FaceTime sessions, at least with family or friends, is that there’s interaction,” she continued. “That’s really important.”

Russell noted that while most research on how screens can affect a child’s development focuses on the effects TV has on children’s language development, rather than how phones and video calls, she said she has noticed that much of what makes good educational TV for children can be applied to teaching and socializing children through screens — namely, that the more accurately in-person interaction is mimicked, the more the child pays attention and actually learns.

Russell, a mother of a 2 year old, said she has noticed that an increase in interactions through screens might increase a child’s developmental understanding of the world. She has seen her daughter interact with family members through screens and connect the faces she sees with the understanding that there are real people on the other side of the screen — something that, according to research done prior to the pandemic, infants and toddlers typically were not expected to be able to do.

“I don’t know if this age of technology is accelerating that development, or providing opportunities for them to learn to represent people — not only in person, but through a screen — earlier than expected,” she said.

Russell noted that there likely will be a degree of stunted socialization, especially for children who were supposed to start preschool and kindergarten during social- distanced learning, and that educators should be aware of that.

“[When it comes to children’s development], I think that there will be long-term consequences that we will have to navigate,” she said, “But we also know that kids are very resilient, and they can catch up quickly in terms of language development and socialization, when given proper structure and guidance.”