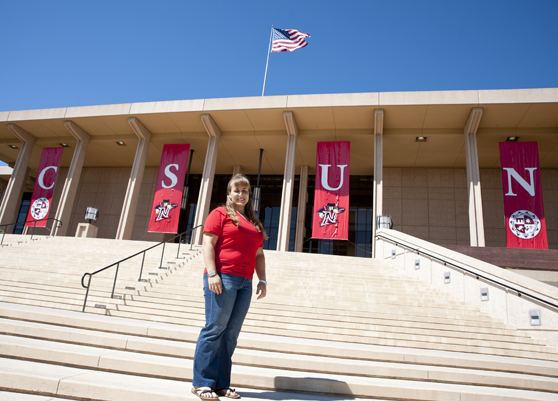 Leanne Stein is the recipient of the first Mediscan scholarship for speech-language pathologists. Photo by Lee Choo.

Mediscan, one of the largest healthcare staffing firms in Southern California, is honoring California State University, Northridge’s impact on their company by partnering with the Communication Disorders and Sciences (CDS) program in CSUN’s College of Health and Human Development. Mediscan is now providing $1,000 scholarships to master’s students training to be speech-language pathologists (SLPs), an area in which Mediscan works extensively, staffing both school and clinical settings.

The first scholarship recipient, Leanne Stein, a student in her final year of the CDS program, received the inaugural award this year. In addition to taking required classes and clinical hours, Stein has been working to cover her expenses. But with two externships and comprehensive exams to complete this year in addition to her finishing her final courses, Stein was going have limited, if any, time to work to pay for it all.

The scholarship provides Stein with the ability to focus on school. “Being able to put money away and save up for the time I won’t be working is really helpful,” Stein said. “To not have to work and be able to focus these last two semesters really on finishing and studying and learning as much as I can before I’m done definitely helps.”

Emily Serebryany ’94 (Accounting), president of Mediscan, founded the company with her husband just a year after graduating from CSUN in 1994. With many campus buildings rendered uninhabitable by the earthquake at the start of that year, her final classes were held in tents. Although her most profound memory of CSUN is of shaken foundations, the foundation CSUN gave her is anything but.

“I am a first-generation immigrant,” said Serebryany, “so I came here without any funds or support. CSUN really helped me to build a foundation and a way to move from not having anything to having a very successful company. It was a foundation for me. Its impact can’t get any bigger than that.”

Mediscan considered several universities when deciding where to fund scholarships. While giving to her alma mater is very gratifying, the excellence of the CSUN CDS program itself compelled Serebryany and her colleagues to make their gift here. “It’s an amazing program,” said Serebryany. “We dealt with some other schools in the country, but this program is very unique, especially the way people are dedicated to the program. It was shown to us on different levels. I was just really impressed.”

Speaking as one businesswoman who is supporting the program, Serebryany agrees that it’s important to support future generations. “I came to this country with absolutely nothing, and I got a chance to succeed,” she said. “It is my personal obligation to share this with other people and help out people who are in the position I was in 20 years ago, and it’s a great personal satisfaction to be able to help out and share the success of the company while helping someone else to succeed. On the company level, it’s been the same philosophy—you want to help people succeed and reach their potential.”

With the strength of the CDS program and Mediscan’s support, Stein knows that she is being well prepared for her future career. “The program itself is so diverse and so strong and then having such a big alumni network, it just gives me confidence that when I graduate I am going to be OK,” she says. “I’m smart enough, got enough information in grad school, and learned everything I was supposed to in order to go out in the world and make CSUN proud.”

For more: Help other students by contributing to CSUN student scholarships.

Cal State schools to give students iPads in effort to cut barriers to college enrollment.

Prep Rally: Keep an eye on these quarterbacks.