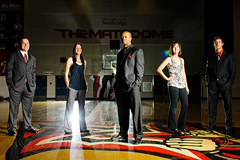 Women have always been a strong influence in Jason Flowers’ life. He was raised by a single mother, and a slew of other women also contributed to the man he is today. That’s what Flowers, head coach of the California State University, Northridge’s women’s basketball team, in part credits, for his success in coaching women’s basketball.

“Where some men have a hard time relating to women, I don’t. It feels natural to coach women,” said Flowers. “Women taught me to be a man.”

His talents are evident.

The team’s winning-record earned them a berth to the Women’s National Invitational Tournament. The Matadors participated in the postseason tournament for just the second time in the program’s Division I history.

Having won 13 more games than it did last season, Cal State Northridge’s women’s team is among the top turnarounds in the nation this season.

Flowers, who took the job in 2010, said the team has been successful because they have adopted his personal mantra and twitter handle “fighting for more than the title.”

He said the mantra describes the team’s ambition and eagerness to succeed.

“It is bigger than basketball for us,” Flowers said. “The goal is to develop the women’s team into a premier program on the West Coast that produces a network of young women that are role models.

“In the grand scheme of things, it’s about more than winning, but developing young women who can take on the world is the goal.”

Flowers is not just committed to the success of his players on the court, but supports their achievements off the court, in the classroom. His team had four players earn Academic All-Big West honors and the team saw four of its members earn degrees following the end of last season.

“Having academically strong players begins in the recruiting process,” Flowers said. “We recruit athletes that value the benefits of obtaining a college degree.”

Before arriving at CSUN, Flowers helped mold University of California, Riverside into an exceptional basketball program as an assistant coach. His head coaching experience began at Valley High School in Santa Ana, where he served as the head coach of the girls basketball program.

His college coaching career began at Long Beach State, where he was an assistant coach for four seasons. While at Long Beach State, Flowers helped coach the 49ers to the 2005–06 Big West Conference championship and developed 11 players into all-conference performers including the 2006 Big West Conference Player of the Year. His duties included player skill development, recruiting, and supervising team and individual camps.

In addition to his coaching experience, Flowers played division I basketball, splitting his time between UC Irvine and UCLA. He was a Big West Scholar-Athlete in 1999.

Flowers’ roots in Southern California are strong. Flowers graduated from Bellflower High School. He is married to Tairia Flowers, Cal State Northridge’s softball head coach. She was a member of the U.S. National Team (2001–08), won a gold medal as a member of the 2004 U.S. Olympic softball team in Athens and won a silver medal at the 2008 Beijing Games. The couple has two children.

Flowers said he can relate to his players.

“My experience has helped me understand the relationship aspect of coaching,” he said.  “I wake up and have the opportunity every morning to do what I love to do, and not everyone gets to do that. Now it’s my turn to help my players do things that they did not think was possible.”