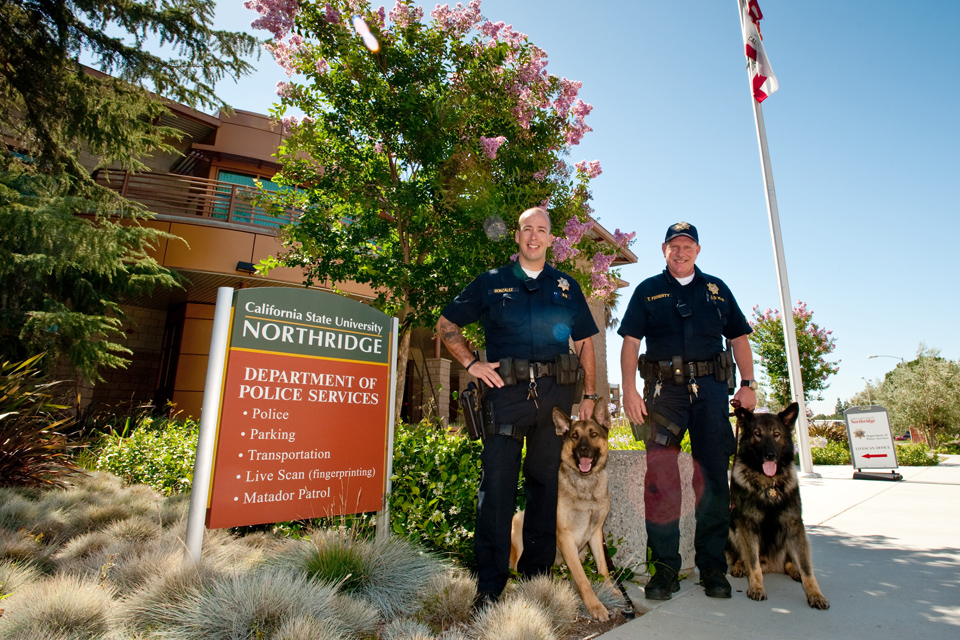 There are thousands of students, faculty and staff who come in and out of the CSUN campus every day during the school year. When you’re the school’s Police Services division and have that kind of population to protect, you may need to get some back up to help you. And what could be better than man’s best friend?

Enter Mitch and Dozer. No, they aren’t two fresh-faced rookies from the police academy. They’re more like furry-faced companions who help Cpl. Tom Finnerty and Officer Raymond Gonzalez keep the peace. Mitch and Dozer are German Shepherds, and every day these two policing pooches help patrol the campus. And before you start to think being four years old (Mitch) or six (Dozer) is too young to be a cop, you don’t know how much training these officers got even before they got to the United States.

The dogs begin their training overseas with a sport called “Schutzhund,” which combines obedience, tracking and protection — three skills that make up the core of police dog work. From there, they are paired with a handler and learn a specialty. For Mitch, his job is to sniff out drugs: marijuana, methamphetamine, heroin, cocaine and ecstasy. Dozer’s nose was trained to detect 15 types of explosives.

“I can effectively search a building or a floor much quicker than with six or seven officers,” Gonzalez said. “All I need is one cover officer and my dog, and we can do the work of six or seven guys trying to look for a burglary suspect.”