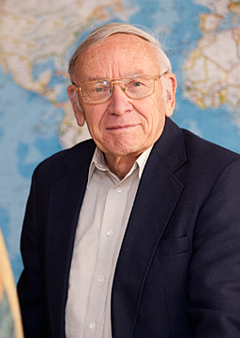 Geography is more than locating a destination on a map or memorizing the names of capitals and countries. It’s an all-encompassing discipline that seeks to understand the surface of the earth, its landscapes and its human and physical features.

James P. Allen, professor emeritus of geographyat California State University, Northridge, has dedicated hundreds of hours to his students, colleagues and the general public in an effort to help them understand the spatial connection between people, places and the earth.

All eyes were on Allen last month when he was presented the Distinguished Service Award at the Association of Pacific Coast Geographers (APCG) annual banquet conference at San Francisco State University. His colleagues were recognizing him for his service to students, the discipline and the larger community. The APCG promotes scholarly research in geography and disseminates geographic information in the Pacific Coast region of North America.

“I was completely surprised and overwhelmed to receive the award,” said Allen. “It was wonderfully gratifying because it recognized the wide range of my teaching, research and other activities in support of geography and geography students over many years.”

“I was personally and professionally pleased and honored to award him,” she said. “He is an inspiration to his colleagues, including me personally.”

Allen’s career took off when he moved to Los Angeles in 1969 to teach at CSUN, then San Fernando Valley State College. His research focused on the settlement and migrations of ethnic and racial populations in the U.S., focusing on Southern California. He retired in 2007.

His research has been published in more than 40 publications, including articles and chapters in books. He often co-authored research with CSUN geography professor Eugene Turner.

“Jim is a most worthy recipient of this award, having devoted his career to educating and encouraging students, carrying out innovative research in ethnic geography and serving in various capacities and geographical organizations,” said Turner. “He is a true gentleman of geography.”

Turner said students and colleagues admired Allen for his encouragement and inspiring teaching methods, including hopping on freight trains with students, eager for them to see, touch and experience for a greater understanding of the field.

“I liked teaching the United States, population geography and ethnic Los Angeles. Where possible, I required students to have field experiences that got them out of the classroom,” said Allen.

“Professor Allen brought forth a passion for geography that I wasn’t aware I had,” one student said in a letter to Zorn. “We are lucky to have him at CSUN—he’s a great professor, very helpful and really nice.”

Zorn said Allen served as vice president and president of the APCG and for 40 years he sustained an active research agenda and continues a consistent work pace even after four years of retirement. He’s a “sincere and a diligent geographer and colleague,” she said.

Allen recalled the thrill of traveling with his family when he was growing up.

“When I was a kid in Providence, Rhode Island, our family had no car until I was 12, but I remember the excitement of taking trains to see relatives in Maine and watching the farms, woods, towns, and industrial cities go by and wondering what life was like in those places,” said Allen. “That thrill turned into a passion that has enabled me to teach students and others how to build a solid, basic foundation of geography so that they could better understand the rest of the world.”