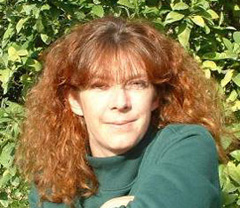 Jackie Stallcup, chair of the Department of English, still can’t believe she gets paid to do something she loves as much as teaching at California State University, Northridge. She said it’s particularly hard to believe because her career trajectory has been anything but direct to teaching.

After high school, Stallcup was accepted into Cal State Los Angeles’ honors business program. But she didn’t know much about careers in business beyond that business people wore suits and carried briefcases. Stallcup went to Cerritos Community College instead and then redirected her energy toward a major in animal science at Cal Poly Pomona. But she second-guessed that option when she heard that students were required to castrate a pig—perhaps, rumor had it, with their teeth.

It wasn’t until Stallcup’s junior year at Pomona that she took freshman composition — a mystery she really can’t explain. After receiving positive feedback on her writing, she felt that perhaps she had finally found her niche. She changed her major to English and after graduating worked in publishing for six years. Eventually turned off by the grind of working at a monthly magazine, she became attracted to the idea of teaching and entered a doctorate program in literature at UC Riverside.

Still, one last hurdle remained in her career path: her first, observed student teaching session. She recounts, “I hauled myself to the top of the stairs and stood there for a moment. Off to my left was the classroom and straight in front of me was the women’s room. It was a moment of decision. I could go teach my class, or I could go puke.”

Stallcup chose the former. She said her nervousness almost instantly melted away. She has loved stepping in front of a class ever since.

Doctorate underway, she practically forced herself on Cal Poly Pomona, convincing English department officials against the odds that they needed a children’s literature specialist.

“While there were faculty members teaching children’s literature, people who would help me a great deal, there was no one there for whom it was a ruling passion,” Stallcup said. Once she graduated from Riverside, her experience teaching at Cal Poly helped her to earn the job as a children’s literature specialist at CSUN.

Though scholarship in children’s literature has come a long way over the past two decades, there are still professors who doubt that it bears academic scrutiny, or they simply dismiss the point of analyzing what they refer to as “cute kiddie books,” Stallcup said.

She encourages academics to look past the juvenile humor—or, more to the point, the poop jokes—in Dav Pilkey’s “The Adventures of Captain Underpants” to “reconsider some of the [literary] boundaries that have marked our world.”

Knowing that students are often dogged by the same level of judgment about their academic and career choices, Stallcup is enthusiastic about mentorship. She considers it a benefit that she grew up in southeast Los Angeles. She attended some of the same community colleges, shares some of the same cultural references and faced some of the same indecision about college as many of her students.

In fact, as pleased as she is to have been elected as English chair earlier this year, she’s not sure how she’s going to get through the next several years without teaching, perhaps in part because she feels she learns as much from her students as they learn from her.

Stallcup, who has taught at CSUN since 1999, lives in Ontario, Calif., with her husband, Wade, an artist, as well as a menagerie of pets including five cats, one dog and two horses. She says that caring for the horses is a soothing exercise for her.

Another “therapeutic” activity is knitting.

“I knit in meetings because, believe it or not, it really helps me to focus,” she said. “So, if I’m in a meeting with you and I’m knitting away at a hat or a pair of baby booties, you know that I’m really listening and absorbing with all my might.”

That said, Stallcup said please don’t take it personally if she doesn’t knit when she’s meeting with you.