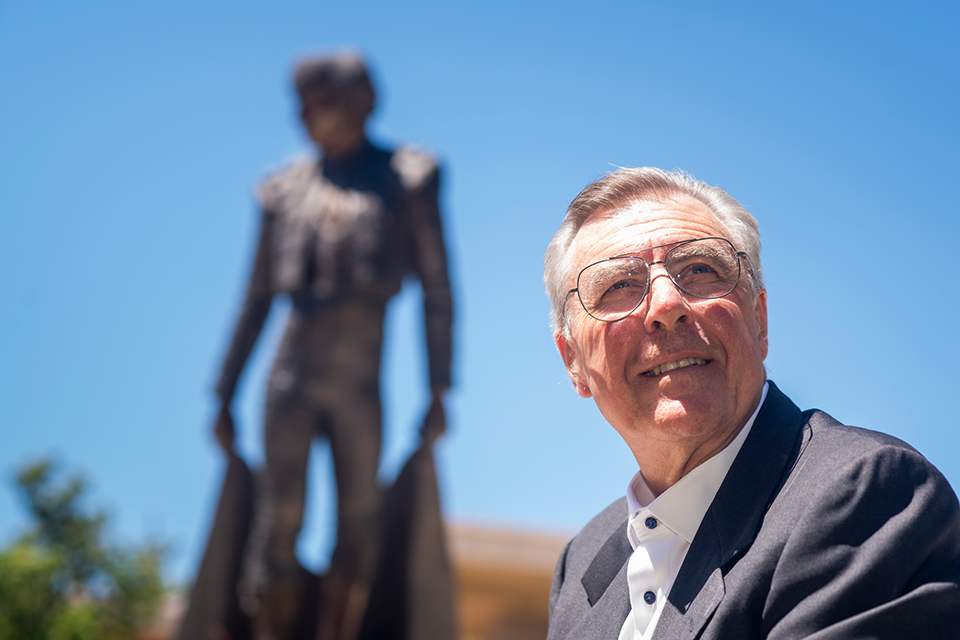 Tom Boxwell’s days as a student at California State University, Northridge (CSUN) gave him more than a great education and springboard for a successful career. It provided a place where community mattered and fostered a desire to give back to an institution he feels has rewarded him handsomely over the years.

With his donation to CSUN — a generous $50,000 to the College of Health and Human Development’s Department of Environmental and Occupational Health (EOH), where he earned his Master of Science in 1979 — Boxwell hopes his action will have a ripple effect, encouraging other alumni to donate, too.

In short, he’d like to bolster the culture of giving. 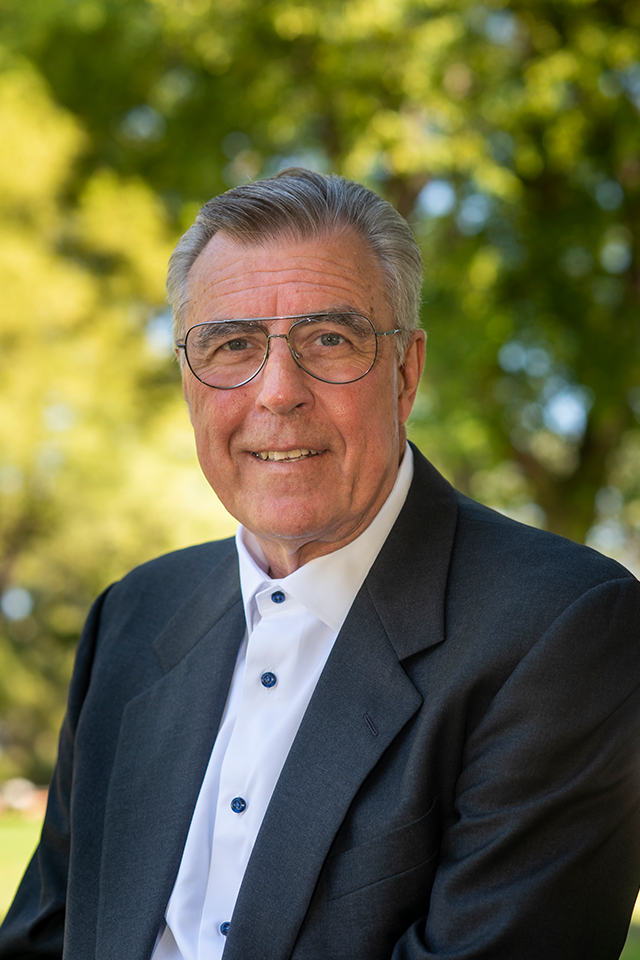 “I’d like this to be a kind of kick-off,” Boxwell said. “The work is doing it the first time; but once you’ve done it, then it’s like cutting and pasting! We’d like to send out a newsletter about what’s going on in the EOH program, and on the back of that newsletter include an opportunity to donate, whether it’s $1 or $100,” he emphasized.

The donation will allow for equipment purchases and student training in the EOH department. Boxwell and his wife Nancy, an attorney, wanted to give a gift that was beneficial for the students and the faculty.

In addition to earning his master’s at CSUN, Boxwell also has a Bachelor of Science in Health Science from the university and had, for 30 years, been a part-time lecturer in the Department of EOH. One of his favorite feel-good moments at CSUN was being selected from a physiology class of 150 graduate students to run a microbiology lab. “Teaching that class is a really good memory. I also took over the lecture sometimes when the instructor wanted to leave early. We were meant to feel, in grad school, special. They didn’t just take anyone; you were there because you were good. They imbued in us a sense of complete confidence.” 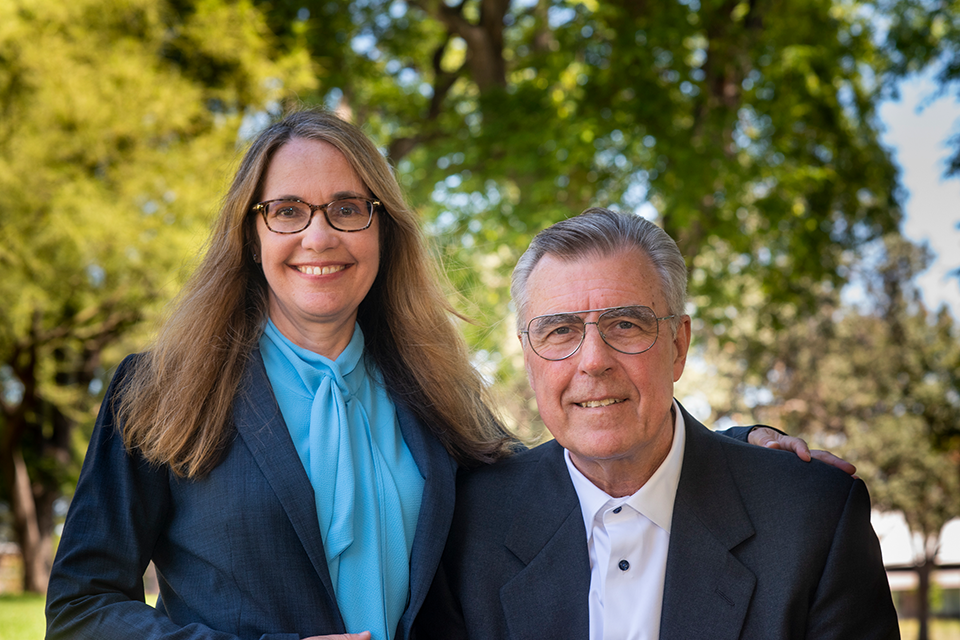 Boxwell said his parents, who relocated to California from Ohio in 1957 to pursue better job prospects, emphasized achievement and the importance of being well-educated. Going to college was an imperative, not a choice. His mother, a registered nurse, found work at Valley Presbyterian Hospital in Van Nuys; his dad obtained a master’s in education from CSUN and taught in the county probation system for more than 40 years. Boxwell also believes his formative years were impacted positively by his participation in The Order of DeMolay, a Masonic youth organization that instilled a core value of leadership in both character and action.

Boxwell’s career took off after graduating with a master’s degree, and he credits CSUN for helping him become an adult. He had gleaned technical training — how to evaluate worker exposure to chemical and biological elements, for example — that enabled him to develop programs where they were needed. During his tenure at Hughes Aircraft Company, where he worked for 17 years, he developed and managed an environmental health and safety audit program that completed more than 150 audits at Hughes facilities around the world. Later in his career Boxwell worked at the NASA Jet Propulsion Laboratory, where he was a laser safety officer for about 8,000 people. 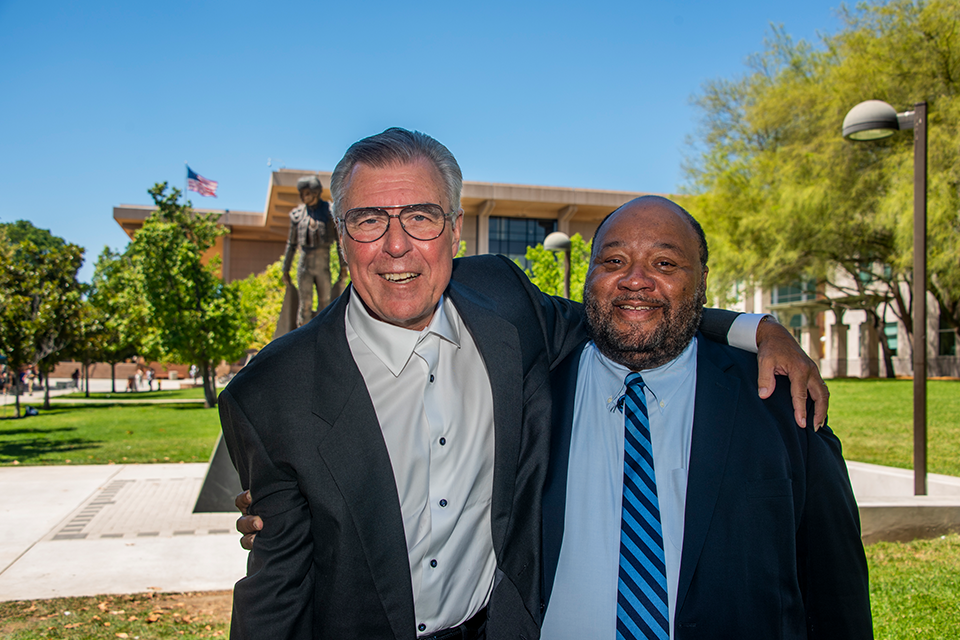 Tom Boxwell and Farrell Webb, dean of the College of Health and Human Development. Photo by David J. Hawkins.

His spirit of generosity has extended to non-monetary giving, as well. At Hughes, he coordinated beach clean-up days, herding 1,300 shorts-and-flip-flops-wearing employees who gathered debris in Playa del Rey. And, while teaching at CSUN, he often took time out during class to talk to students about the impact of giving.

“I would tell them, ‘It’s likely you’ll make more money as you move forward in your career. You need to find a charity you like and support it, either financially or with sweat equity, maybe both.’”

Farrell J. Webb, dean of the College of Health and Human Development, agreed. “You have to give back. I went to a Jesuit school, and I learned their philosophy of being obligated to give back to the institution that educated you. And the alumni always ask for money, which is okay — they never insist, they just ask. We have to introduce people to the idea that they can give — and for students, they don’t have to do it now, they can wait until later.”

Aside from reaping the educational and professional benefits of attending CSUN, Boxwell found lasting personal relationships from his time as a student. He worked with many friends he had met in school; and in the 1980s, he and fellow Matador Owen Seiver formed a band, Curves, that played all of the local venues, many of them high profile — The Roxy, The Whiskey, The Troubadour. The rockers gained a loyal following, signed a record contract with EMI and even appeared in an MTV video.

Boxwell reflects on his meaningful CSUN connections and reiterates his gratitude for the program that enabled him to have a great career. “I hope this donation will alleviate some stress in certain areas and make people happier, if even for just a day!”

College of Health and Human Development, Department of Environmental and Occupational Health, donor