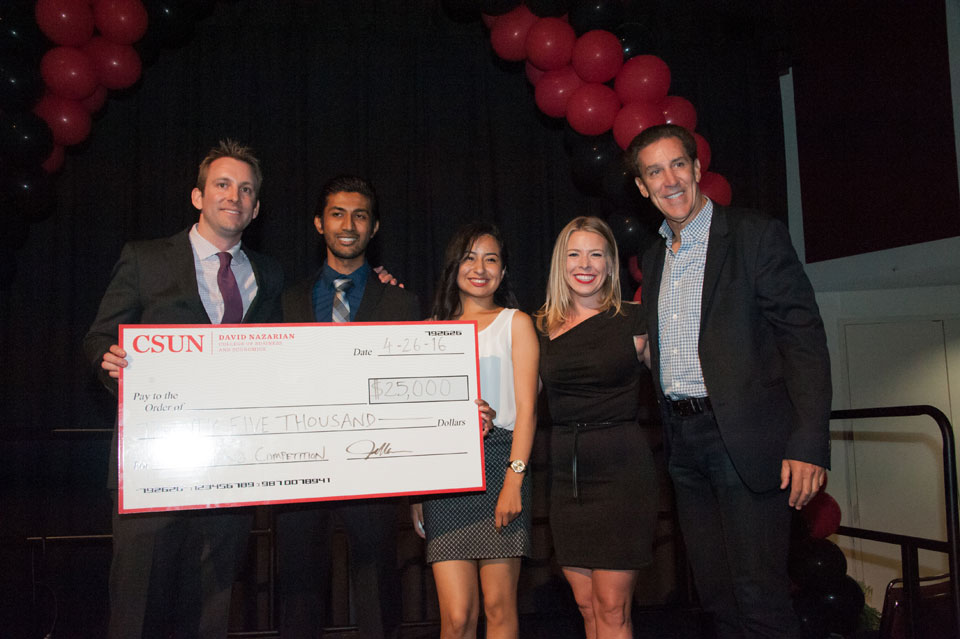 A proposal for a new a way of delivering a healthy mix of probiotics and electrolytes while at the same time battling malnutrition and dehydration in children around the world took the top prize Tuesday, April 26, at California State University, Northridge’s “Bull Ring” — CSUN’s version of “Shark Tank.”

Taking second place and $15,000 was Take Sessions, a mobile academy — proposed by CSUN business student Jonathan Saeidian and his brother, Joseph — that offers private music lessons to students in almost any music category around the United States.

“I was impressed with the caliber of all the students’ projects,” said entrepreneur, philanthropist and CSUN alumnus David Nazarian, one of the competition’s judges. “I’m proud to see that we have so much potential among the students here. With the right support and capital, there’s nothing to stop these teams from creating exceptional businesses.”

“All our hard work for the past year has paid off,” Rahman said. “This win is a major step forward in getting our business off the ground. This is amazing.”

Vibe Probiotics is poised to take advantage of the probiotic trend by providing a full complement of probiotics, prebiotics and electrolytes to its customers. Unlike many products currently on the market — which have the bacteria and minerals already mixed into their products, thus limiting their shelf life — Vibe’s products are presented in a unique delivery system that does not release its nutritious components until the consumer is ready to drink or eat them.

As part of Vibe’s philosophy, the company’s founders plan to use a portion of every sale to support efforts to combat malnutrition in children around the world.

Rahman said the company is already in talks with several businesses, including grocery stores and athletic-event organizers, to explore ways of marketing their product.

The idea for the Bull Ring New Venture Competition grew out of a lunch meeting between Nazarian, founder and CEO of Nimes Capital, and former CSUN classmate and businessman Jeff Marine, a leading apparel industry manufacturer. While discussing ways to encourage entrepreneurial thinking among CSUN students, the conversation strayed to a discussion about “Shark Tank” — a reality television show that has aspiring entrepreneur contestants make business presentations to a panel of “shark” investors — and the idea for the Bull Ring was born.

Local business leaders, CSUN alumni and business faculty spent much of March meeting with potential contestants and hosting a series of workshops designed to give the competitors an idea of what they need to launch a startup.

The teams were asked to submit a five- to seven-page written executive summary or a 10- to 25-page slide deck and a two-minute video about their ideas. The ideas were judged on their feasibility, market potential, traction and quality of presentation.