California State University, Northridge alumnus Paul Jennings has announced a $500,000 challenge grant for the university’s College of Business and Economics. 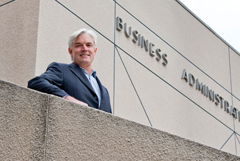 Alumnus Paul Jennings has offered a $500,000 challenge grant for the CSUN College of Business and Economics. Jennings will match all donations to the college, up to $500,000, one-to-one. Photo by Lee Choo.

For every dollar donated to the college, Jennings, who earned a bachelor’s degree in marketing from CSUN in 1985, will match the contributions one-to-one, giving the college an unprecedented opportunity to raise $1 million.

“I’m hoping this gift becomes a catalyst for others to do the same, to start giving back to an institution that has made an incredible economic impact on the San Fernando Valley and Los Angeles as a whole,” said Jennings, founding partner of Public Communication Services, Inc., which designs and installs inmate telephone systems for state, federal and county correctional facilities across the United States.

Jennings said the grant is a way of acknowledging not only the important role Cal State Northridge plays in the region, but also the positive impact it has had on him personally. He said the education he received at CSUN helped shaped his career as the owner of successful telecommunications and real estate businesses

“As an alum, when you start getting later in life, you have the privilege of looking back and connecting dots in your life,” said the 53-year-old Brentwood resident. “Now that I’ve had 30 years to apply the education I received at Northridge, I have a growing sense of the meaningful impact of it.”

Jennings said he hopes his gift will highlight the continuing importance and growth of CSUN and the College of Business and Economics, in particular.

“We are all inundated with choices of worthy causes to donate to, so I consider where I can make the best impact with the money I’m going to give,” he said. “When I see the quality of students at Northridge, many of whom are getting their education through their own set of adversities, whether it’s working full time or being the first in their family to attend college, I know that these students will become some of our community’s most productive members.”

Jennings himself found CSUN through a nontraditional path. He initially came to California in 1980 to work in Lockheed Martin’s Burbank Skunk Works after completing vocational training in aerospace manufacturing. Realizing that a college education would further his career prospects, Jennings took courses at Valley College and College of the Canyons before starting night classes in business at CSUN.

“I quickly appreciated the dialogues with my classmates, who were in the business community,” he said.

Jennings worked his way through school selling long-distance phone plans before spinning off to form his own company that specialized in prison phone systems.

In addition to his financial contributions, Jennings also volunteers his time at the college, participating in its annual Professor for a Day event, serving on the college’s advisory board and mentoring students.

“One of the most meaningful things I can do with my time is give back to young kids,” he said. “At CSUN, there’s not just the opportunity to give money, there’s also the opportunity to get involved with students who are very eager and appreciative for alums to share their experiences.

“Northridge has a rich body of alums, who all have stories to tell,” continued Jennings. “The best way to carry on that tradition is for those folks to start giving back so that the story continues for the next generation.”

To contribute to the College of Business and Economics and have your donation matched one-to-one by Jennings, visit the website http://give.csun.edu/business.

For information on volunteering with the college, contact Matt Rinnert, director of development for the College of Business and Economics at matt.rinnert@csun.edu.

Alumni, College of Business and Economics, Gifts and Grants