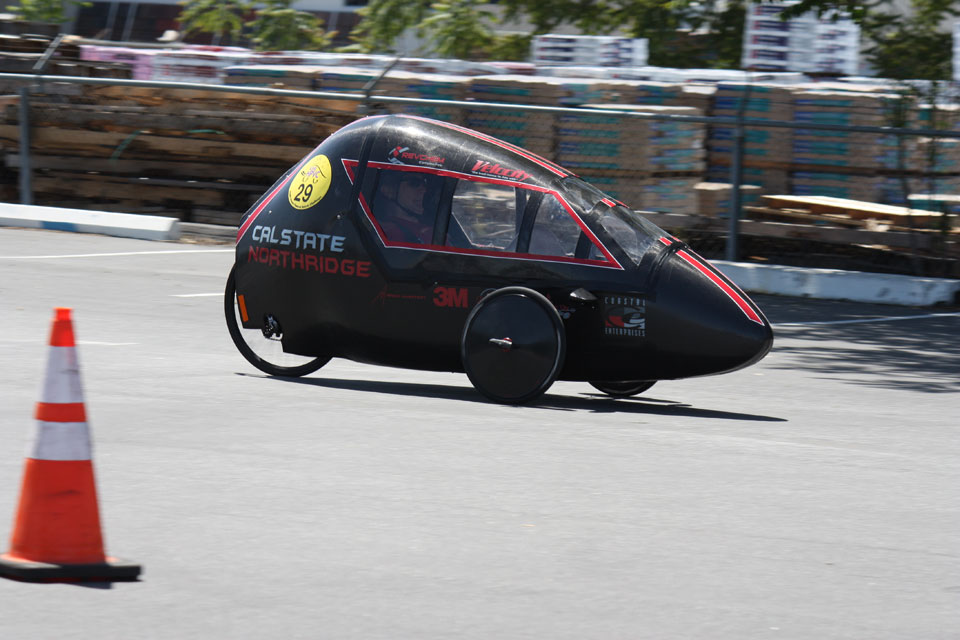 More than 30 student teams from universities from the United States, Mexico, Egypt and India participated in the competition on April 22-24. Each team brought an originally designed human-powered vehicle, which were judged for design, workmanship and innovation, among other categories. They then showed off what their vehicles could do in drag races and endurance races that tested the vehicles’ speed and construction.

The CSUN vehicle, called “The Khach,” has been in production for the past year as part of a two-semester senior design class. The team spent the first semester researching and designing the vehicle, and the second semester building and testing it.

“The Khach” is akin to a recumbent bicycle, though it has two wheels in the front and one in back. It leans back, sits low to the ground and can travel up to 35 miles per hour just by pedaling. It can be used as a clean-energy, alternative means of transportation for short trips, such as going to the grocery market.

Mechanical engineering professor and faculty advisor Aram Khachatourians — the vehicle’s namesake — said space in the senior design class is competitive because he carefully selects those who have the right attitude to work on a team.

“Not anyone can just sign up,” Khachatourians said. “I have to go through a selection process. I ask, ‘What do you bring to the table?’ because this is about teamwork.”

Khachatourians said the students worked hard throughout the semesters and were challenged to learn new things, sometimes beyond their own expertise. He said about 70 percent of the innovation was electrical, and as mechanical engineering students, they had to use a multidisciplinary strategy. This hands-on experience was a taste of what the professional field of engineering is like, he said.

The team was divided into five subgroups, focusing on components, faring, frame, innovation and systems. The goal was to optimize the vehicle and improve on the model from the previous year’s team.

To achieve maximum speed, they designed the vehicle to be as light as possible, weighing only 62 pounds — compared to the 100-plus-pound vehicles of other teams. They designed the faring to be aerodynamic and figured out the right combination of gears for the wheels to travel up to six feet in one revolution of the pedals.

The CSUN team also added a new feature to their vehicle that was influenced by the previous year’s challenge, where a vehicle from a competing school lost control and collided with one of the ASME judges while traveling at 38 miles per hour. The judge ended up needing surgery.

This year, the CSUN team added an Autonomous Brake Assist System (ABAS) to “The Khach.” The ABAS continuously senses objects in front of the vehicle and analyzes the live data and distance from the object. If the object moves away or distance increases, there is no action taken, but if the object is approaching, the brake system is automatically engaged without any input from the rider, bringing the vehicle to a safe stop and preventing an accident.

Senior mechanical engineering student Rachel Foreman, who served as the systems team lead and participated in the challenge as a rider, said working with her team and building the vehicle over the past year has been an exciting, gratifying and enjoyable learning experience.

“While it has certainly had its ups and downs, [the experience] has definitely improved my motivation and teamwork as an engineer and generally as a person,” Foreman said. “I have found that I have become more patient, which I am sure will be invaluable to me in my future career. I have also made some great friends on the team and enjoyed an incredibly fun year with them.”

Foreman said the Department of Mechanical Engineering is very supportive of its students.

“CSUN’s mechanical engineering department has been wonderful — the professors are really great and care a lot about the students’ success,” Foreman said. “Professor Khachatourians is a perfect example, as I am positive every student who has ever taken him would attest to [his excellence as a professor]. There is a lot of industry experience in the department, which is something that you might miss out on at a more theoretical school. We get plenty of hands-on practice, along with the background knowledge and practical advice.”