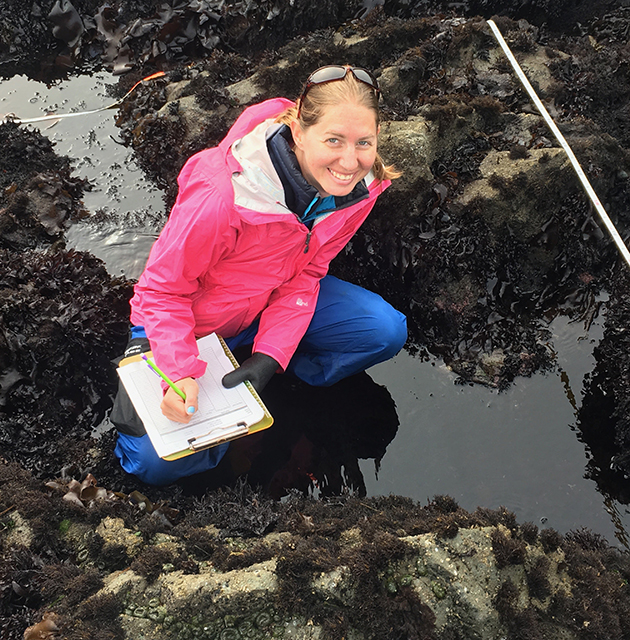 CSUN marine biologist Nyssa Silbiger has received the prestigious CAREER Award from the National Science Foundation, which recognize exceptional young scientists who are spearheading projects in their fields and laying the foundation for the next generation of researchers. Photo courtesy of Nyssa Silbiger.

The National Science Foundation’s Faculty Early Career Development Program awards, known as the CAREER awards, recognize exceptional young scientists who are spearheading projects in their fields and laying the foundation for the next generation of researchers.

Among this year’s recipients is California State University, Northridge marine biologist Nyssa Silbiger, who uses a diverse set of laboratory, field and quantitative techniques to understand the human impact on coastal marine ecosystems.

“I am so honored to receive the award,” said Silbiger, who joined CSUN’s Department of Biology as an assistant professor in 2017. “What makes this honor so unique is that it combines research and education. Not only does it recognize the research I am doing in marine ecology, but it also recognizes my work as an educator, training the next generation of scientists. That’s what makes it so special.”

The award comes with an $800,000 grant, which will fund her research on how ocean acidification and ocean warming are impacting the intertidal communities off Southern California’s coast. Specifically, she will be looking at their impact on the metabolism of the marine ecosystem under multiple environmental conditions, including during both high and low tide.

To assist her, Silbiger will be tapping into the talents of students in her marine ecology class, who will help collect data both in the field and in the lab. Further, Silbiger is spearheading a summer “data science boot camp.” These students will be integral in analyzing the data collected from the project and will receive a small stipend to participate in the boot camp.

“They will learn how to code, some basic statistics, and open data science practices,” she said. “One of the goals of the project is to increase diversity in the sciences. To do that, we need to give our students the skills to succeed, the ability to practice those skills over time and learn that doing science can be fun. I’m hoping to attract freshmen and sophomores to the project so they can gain experience, early in their careers, doing both hands-on research and data science, which is pretty rare for undergraduates.”

Data science is an interdisciplinary field that uses scientific methods, processes, algorithms and systems to gain information and insight from structured and unstructured data. In Silbiger’s case, in addition to collecting extensive field samples, she utilizes Bayesian statistics (a mathematical procedure that applies probabilities to statistical problems) and model selection to understand what is happening in marine ecosystems.

To better understand what is happening in the waters off Southern California’s coast, Silbiger also has built a state-of-the-art aquarium laboratory in what looks like a cargo container set in a campus parking lot. The lab’s aquarium can simulate oceanic climate change conditions by warming and acidifying water, as well as manipulating tidal cycles.

She will be taking species from the coast’s intertidal communities, such as mussels, snails and algae, and allowing them to interact with each other in the aquarium.

“Then I am going to heat things up, acidify some things, and then measure how the community as a whole reacts,” she said. “I’ll be measuring their production rates and their calcification rates — basically taking the pulse of the ecosystem to see how the community as a whole is metabolizing and responding to rising ocean acidification and climate change.”

Silbiger said she hopes the data she and her students collect will provide insight into what may happen in the future in the waters along Southern California’s coast and inform decisions that could impact the area’s famous coastline.

To help communicate what they learn, the project also will have an artist-in-residence, visual artist Lauren Shapiro, who will visually capture the work of Silbiger and her students. Shapiro utilizes a multi-step casting process in clay resulting in modular sculptures and installations which reference systems and visual orders found in nature. Her work draws inspiration from environmental research and data, ceramics and social practice.

“People can sometimes find scientific research — even if it’s about a subject we all may care about, like our oceans — hard to comprehend,” Silbiger said. “The artist’s work is often a great translation that everyone can understand. Our goal is to have an art show here in Los Angeles of our work at the completion of the project.”