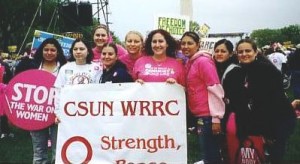 It’s nearly impossible in this day and age to graduate college debt free. Compounding the matter for women, according to recent studies, is the fact that upon graduation they will be earning less than their male counterparts.

Officials at California State University, Northridge’s Women’s Research and Resource Center are hoping to change that. With the help of a $4,600 grant from the American Association of University Women, they have launched a project called “The Difference a Dollar Makes” to draw attention to the gender wage gap and come up with community-based solutions.

The American Association of University Women recently released “Graduating to a Pay Gap: The Earnings of Women and Men One Year after College Graduation,” a study that shows that millennial women who are just one year out of college are paid on average 82 cents for every dollar paid to their male peers. The study also found that 20 percent of women working full time one year after graduation are devoting more than 15 percent of their earnings to paying back college loans—considerably more than is manageable for a typical graduate.

Shira Brown, director of CSUN’s Women’s Research and Resource Center, said students taking part in “The Difference a Dollar Makes” project will spend the better part of one semester learning about and exploring the gender wage gap. The class will culminate with the creation of installations to be displayed throughout the campus.

“These installations will visually represent how everyday necessities, like filling up her gas tank and many other things, limit a woman’s ability to financially compete in today’s society,” she said.

“The goal is to get students both male and female to become aware of this situation and get them thinking about the gender gap. Post graduation loans affect everybody, and people need to know that a woman’s salary greatly impacts her ability to pay back that loan,” said Brown.

The Women’s Research and Resource Center, supported by CSUN’s College of Humanities and Associated Students, Inc., is designed to address issues of concern to women. Its services include classes, workshops and informal peer support along with bringing in well-known speakers to address contemporary issues facing CSUN’s women. For more information on the Women’s Research and Resource Center visit their website at http://www.csun.edu/ws/WRRC.html.

The American Association of University Women (AAUW) empowers women and girls through advocacy, education, philanthropy, and research. Their nonpartisan, nonprofit organization has more than 150,000 members and supporters across the United States, as well as 1,000 local branches and 700 college and university partners. Since AAUW’s founding in 1881, their members have examined and taken positions on the fundamental issues of the day, educational, social, and political. To learn more visit their web site www.aauw.org.