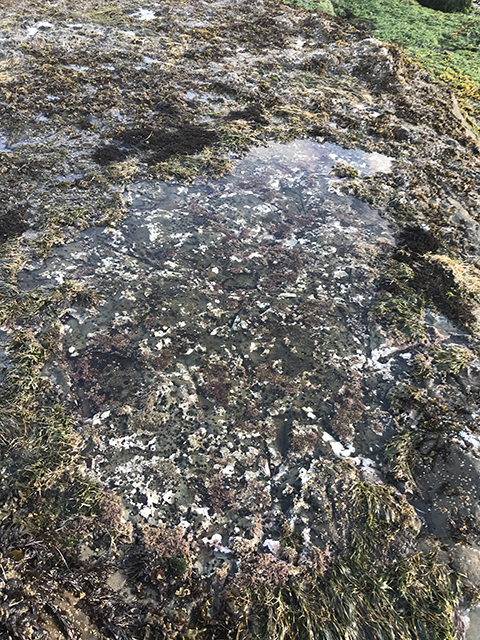 Coastal tide pools offer endless hours of educational entertainment for beach-going families to explore their shallow depths for sea stars and other interesting sea creatures. Tide pools are also providing marine biologists with clear evidence that major disturbances, on land and in the ocean, are changing marine ecosystems in dramatic ways.

A recent study by California State University, Northridge marine biology professor Nyssa Silbiger and Jennifer Fields, a 2021 California Sea Grant State Fellow and research technician in Silbiger’s laboratory, demonstrated that when key tide pool foundation species — species like mussels and surfgrass, a type of seagrass, that help create the tide pool ecosystem — disappear, temperatures in the tide pool can increase by nearly 7 degrees Fahrenheit, and the amount of light can increase by nearly 145 percent. 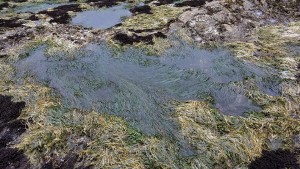 The same tide pool as pictured at the top, before surf grass was removed. Photo courtesy of Jennifer Fields

“Changes that dramatic mean the entire ecosystem of that tide pool changes, and the tide pool community some of us are familiar with is gone,” Silbiger said.

The changes she witnessed were so dramatic, Fields said, that when she put her hand in the tide pools from which surfgrass or mussels were removed, she could feel the difference.

“There was no question that the water was much warmer,” she said. “It was as if someone had emptied their warm bath water into the shallow tide pools.”

“Dramatic changes in just light and temperature can change the physiology of organisms that make up the tide pools,” Silbiger said. “Foundation species loss has a cascading effect, first on the tide pool organisms, and then on the neighboring marine communities that interact and rely on that ecosystem.”

Fields, who earned her master’s degree in biology from CSUN, spent two months in summer 2019 along the coast of central Oregon, leading a team of summer interns from CSUN and Oregon State University studying what would happen to tide pools if the foundation species mussels and surfgrass were to disappear from local tide pools. 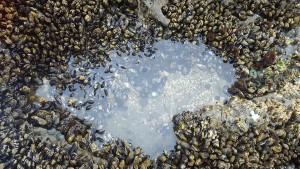 She and the students conducted controlled experiments to find out what would happen to the tide pool’s community structure when foundation species are removed. They collected data on light, temperature, dissolved oxygen, dissolved inorganic nutrients and pH, or acidity, levels.

The study came on the heels of a massive die-off of mussels in tide pools along the Northern California coast during a terrestrial heat wave. More recently in 2021, another terrestrial heat wave in British Columbia led to the deaths of millions of sea creatures along Canada’s coast.

“These terrestrial heat waves and die-offs used to be once-in-a-lifetime events,” Silbiger said. “But with climate change, these types of events are occurring much, much more frequently.” 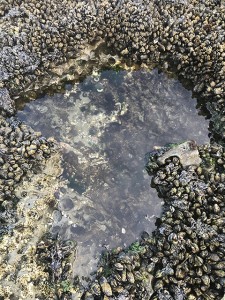 “It was scary see the impact that foundation species loss was having on the environment,” Fields said.

“But it’s important,” Silbiger added, “to understand what is happening and what will happen as climate change continues. Hopefully, this study will provide a platform for future studies about the impact changes in tidal communities can have on the marine ecosystem.”

Fields pointed to one incident to illustrate how quickly the loss of a foundation species can change a tide pool’s ecosystem.

“After weeks of working pretty much non-stop at the tide pools, I decided to take a weekend off to hike a mountain,” Fields said. “When I came back two-and-a-half days after mussels and surfgrass were removed the tide pools, diatoms, a microalga, covered the entire tide pool. All of a sudden, it was a totally different environment. Those little diatoms are really good at photosynthesizing, which means they were changing the oxygen and pH levels in that tide pool in dramatic ways almost overnight.

“The tide pool that was there the Friday morning before I left was completely changed by the time I got back Monday,” she said.