An endless sea of people, dressed for the cold and raising handmade signs calling for the camaraderie of women, greeted Noemi Tungüi ’17 (Psychology) as she stepped onto the stage in front of San Francisco City Hall. With a bright-red handprint painted on her face, Tungüi sported a shirt that read “No More Stolen Sisters” — the mantra of a movement that seeks to raise awareness about murdered and missing indigenous women. 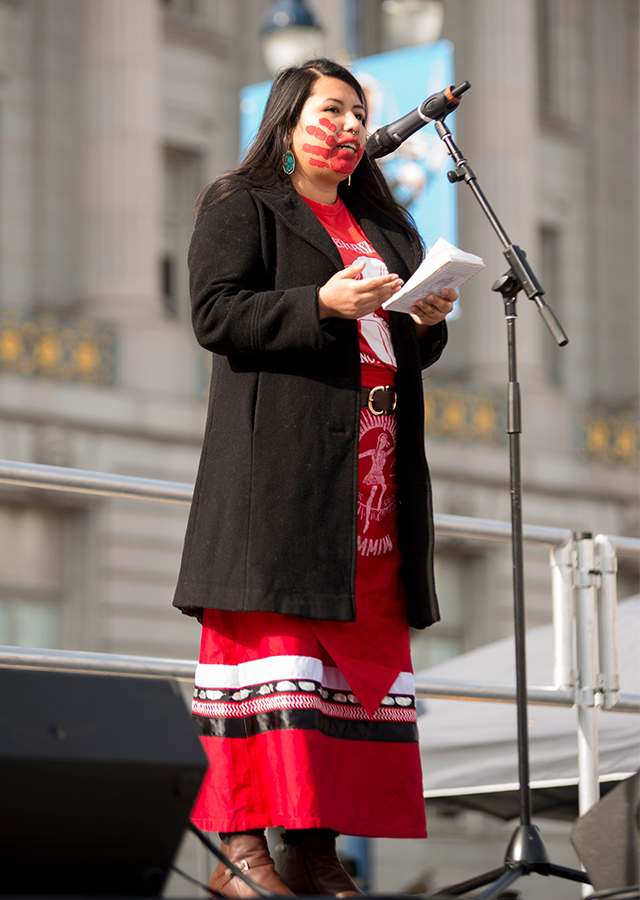 Noemi Tungüi ’17 (Psychology) speaks about the rights of indigenous women, on Jan. 18 at the San Francisco Women’s March. Photo courtesy of Noemi Tungüi.

On Jan. 18, along with cities across the nation, San Francisco held its 2020 Women’s March, which led an estimated 12,000 people from Market Street down to the Embarcadero. This year’s theme was “Together We Rise,” focusing on the interconnectedness of all social justice issues and ways individuals can contribute to building a society in which women are truly free.

The march began at City Hall, where the crowd was galvanized by a series of speakers, including activists and leaders who spoke about issues such as discrimination, environmental justice and human rights.

Tungüi, 26, joined that lineup. Organizers of the Women’s March reached out to Idle No More SF Bay, a multigenerational indigenous women-led organization dedicated to creating positive change for the environment and the rights of native peoples. As a prominent and involved member of the organization, Tungüi was handpicked by its co-founder and her mentor, Pennie Opal Plant.

A Journey of Activism

Tungüi’s journey of activism began at CSUN. As an undergraduate, she was involved with the American Indian Student Association. She also joined multicultural sorority Lambda Sigma Gamma, which promotes the empowerment of women. There, she performed in two CSUN productions of “The Vagina Monologues,” an episodic play by Eve Ensler that ignited the “V-Day” movement to stop violence against women and girls. The play was presented at CSUN by Tungüi’s sorority sister Veronica Chavira, along with other women. 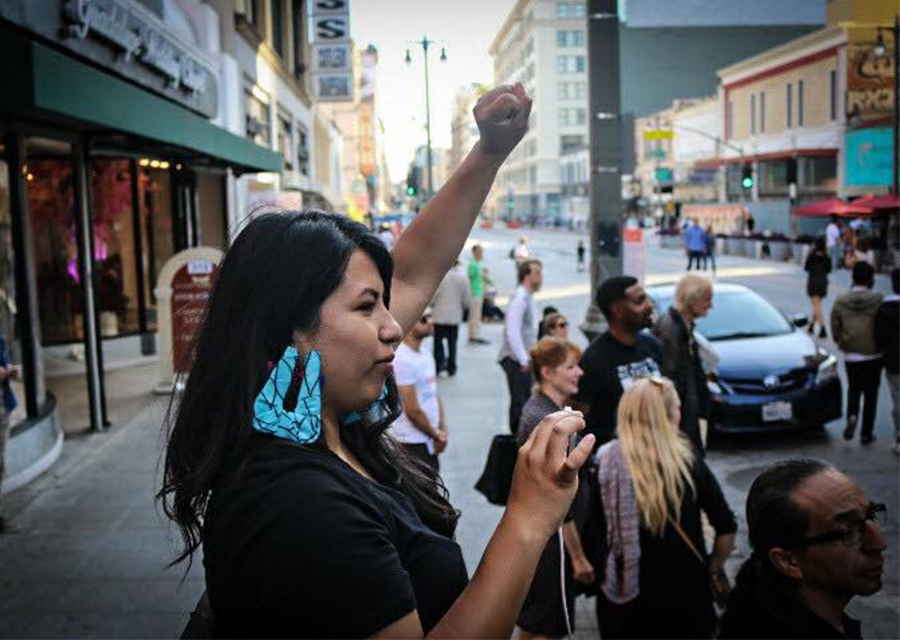 Noemi Tungüi volunteers alongside organizers at a Bernie Sanders event in Los Angeles in 2016. Photo courtesy of Noemi Tungüi.

In her senior year at CSUN, she had the chance to participate in the CSUN in D.C. Internship Program, during which she interned in the office of Rep. Raúl Grijalva (D-Arizona) in Washington, D.C. Her experience there encouraged her to make change through politics and legislation, she said.

At the Women’s March, Tungüi spoke passionately about the inextricable link between Mother Earth and the rights of Native American women. Born in Parangaricutiro in Michoacán, Mexico, Tungüi traces her roots to the Purépecha, an indigenous group based in western Mexico.

“Indigenous rights are not negotiable,” Tungüi said, and the audience roared. “We need to center on stories of indigenous people, who have always been stewards of the land and waters, vital for life on Earth. Indigenous women have been living in balance with nature for thousands of years. So, we invite you to listen to us, because we have valuable knowledge that humanity needs during these times of crisis.”

Tungüi said the experience of speaking at the march was humbling, and she was delighted that her message was well received. After her speech, she said, a woman approached her and said she was inspired by Tungüi’s words.

“[The Women’s March] is a space to talk about issues that may not be on people’s radars,” Tungüi said. “But attending is not the end goal. It’s somewhere you go to get inspired and heed the call to action.”

She closed her speech at the march by encouraging listeners to support and stay involved in causes that resonated with them. 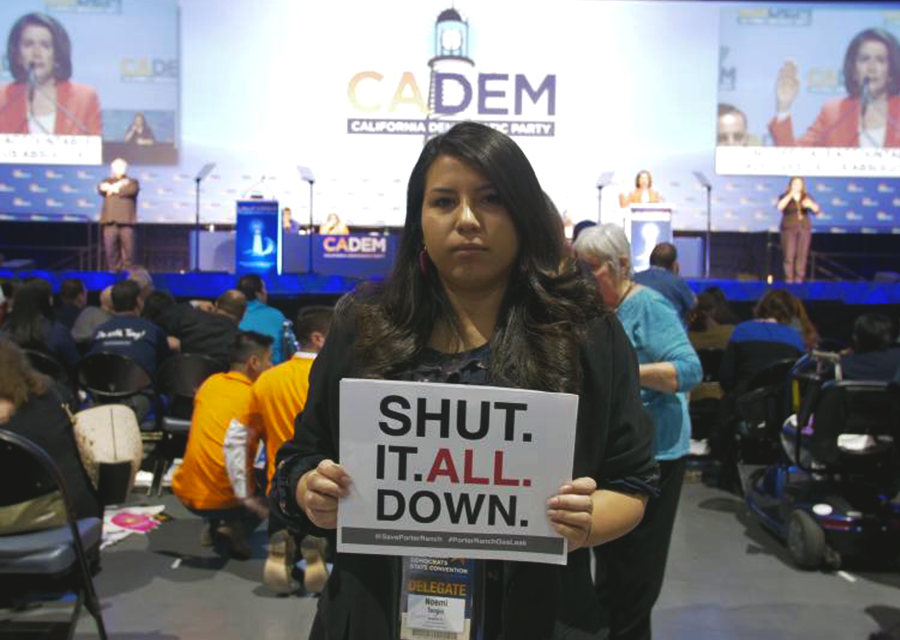 Noemi Tungüi at a California Democratic Party convention, where she urged attending politicians to support the immediate shutdown of the Aliso Canyon Gas Facility in the San Fernando Valley. Photo courtesy of Noemi Tungüi.

Her political experience also includes serving as a national at-large delegate for Sanders in the 2016 election; as the Assembly district meetings delegate for the California Democratic Party in the state’s 44th District; and campaigning for former Richmond City Councilmember Jovanka Beckles, for the state’s 15th District. Tungüi is the Bay Area co-chair of the Progressive Caucus and active member of her union, the Service Employees International Union Local 1021.

After the CSUN in D.C. Internship Program, she continued her development as an activist for indigenous and environmental rights when she traveled to North Dakota to drop off donations to land and water activists protesting the construction of the Dakota Access Pipeline. The pipeline, which was completed in April 2017, runs through native land and burial sites.

In her Women’s March speech, Tungüi drew a line between women’s rights and indigenous rights.

In 2017, a full-time job as an environmental organizer with Food and Water Watch and Action — a group that leads nonviolent action against government and corporate misuse of food and water supply — brought her to Oakland. Currently, she works at Oakland’s Native American Health Center, a nonprofit that provides underserved populations in and around the Bay Area with mental and physical health and wellness resources and services. 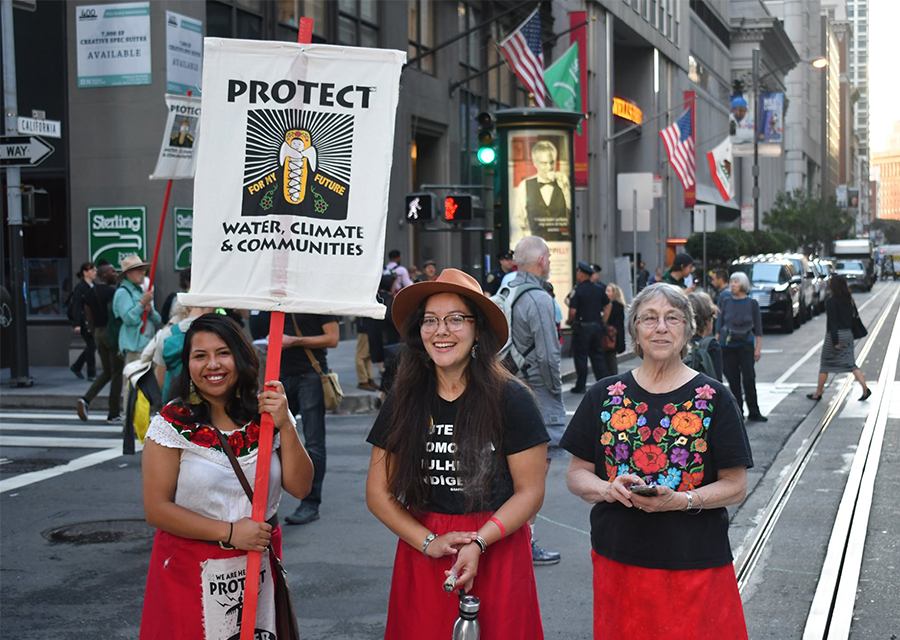 She’s also passionate about her volunteer work for Idle No More SF Bay. Tungüi said she owes much of her journey to her mentors, including Opal Plant at Idle No More SF Bay and her own grandmother — as well as other women involved in movements, such as the ones she met and spoke alongside at the Women’s March.

“I’m always inspired by them,” she said. Just like her sister activists, she said, she hopes to inspire others, too.

“People didn’t have to [explain] to me about what it’s like to struggle,” Tungüi said, noting her experience of being a formerly undocumented woman of color and a member of the LGBTQ community. “But my story of struggle is not unique, and I realize how important it was for me to share my story.”