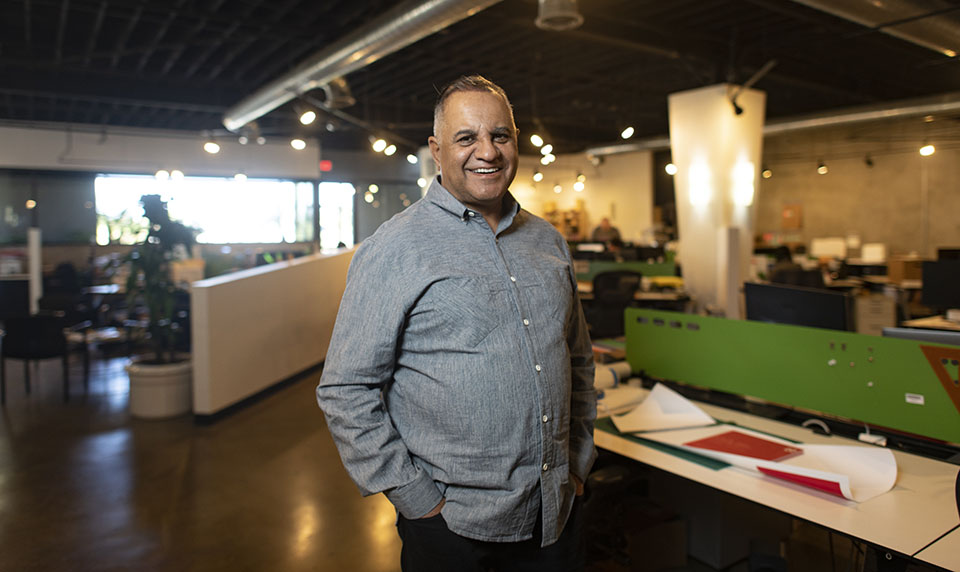 It started with a potter’s wheel.

Ravi K. Sawhney ’79 (Art), always a creative child while growing up in Reseda, was inspired and entranced by his high school ceramics teacher, Leroy Petersen, at Cleveland High School. The teacher, who’d studied under a ceramics master in Japan, gave Sawhney free rein of the potter’s wheel and kiln, as well as his extensive library of art and design reference books.

Sawhney devoured the books, fascinated by design and how things worked (or could work) for people.

Close with his family and of modest means, after graduation Sawhney enrolled at CSUN — originally in the engineering department. There, he participated in a summer “bridge” program to help incoming freshmen adjust to college life.

Fast-forward 40 years, and Sawhney has established himself as a giant of design and innovation — in a very humble package. Based at his longtime headquarters in Thousand Oaks, he’s never strayed from the Los Angeles area, but his company’s products have touched millions of consumers.

His firm, RKS, which celebrated its 40th anniversary this year, is best known for its early design of medical innovations such as a diabetic infusion pump for MiniMed (later Medtronic), computers for Atari — and for making toy industry history in the 1980s with its development of the production design of the animated Teddy Ruxpin.

Sawhney started early, already working full time by late 1978, when he was still completing his bachelor’s degree. In L.A., he worked for the Xerox Advance Group, which was linked to the technology behemoth’s legendary Xerox PARC (Palo Alto Research Center) in Silicon Valley — a research and development group widely regarded as the genesis point for many of the innovation and tech advances on which we depend today, such as laser printing, the mouse and the modern personal computer. The team on which Sawhney worked developed the first touch screens, for example.

By 1980, Sawhney left Xerox to forge his own path.

“Corporate life was not for me,” he said. “I left and struck out on my own. It was RKS Design Associates. I always laughed, because the ‘associates’ was me, myself and I.”

RKS got its start when Sawhney rented out his house to raise funds and moved back into his parents’ house. Later, he built an office building in Topanga Canyon, which his firm quickly outgrew. In 1998, RKS moved to its current 18,000-square-foot location in Thousand Oaks.

“The philosophy was: Do right by your client, and you’ll do right by yourself,” Sawhney said. “The job was to make the client successful. Then we got different calls, but the basics were always: Deliver on time, on budget and exceed client expectations. Real simple business practices, just like blocking and tackling. But if you can be on time every time, on budget and exceed their expectations, then you’ve bought client loyalty. Combined with thinking strategically for the client, how do you leapfrog the competition?

“Now the firm is 40 years old, and the diversity of our work is mind-blowing,” he said. “We’re doing mouthguards for athletic purposes, and we’re reinventing the design of the hookah. We’re doing electronic water bottles that tell you when to drink and how much you should drink. We’re doing autoinjectors for pharmaceuticals, branding projects and strategy projects. We’re talking to people all over the map.”

This is all driven, he said, by an advanced design-thinking methodology he trademarked called “Psycho-Aesthetics” — the philosophy behind industrial and consumer design. Sawhney’s tagline is, “It’s not how you feel about the design; it’s about how it makes you feel about yourself.”

He developed this methodology (based on his study of philosophers Joseph Campbell and Abraham Maslow) into a curriculum taught in business schools, and one which he shares as a guest lecturer at universities and design schools around the world. He looks forward to these presentations, Sawhney said.

“If you can give [the students] one nugget, if they took one thing away from it, you could change the path of their career, for life,” he said.

That spark was certainly true for Sawhney at CSUN.

“It was a great education,” he said. “Being in the art department, I was able to take multiple classes in ceramics, jewelry design, wood design, graphics and lettering, and industrial design — and you really put it all together. I kind of took my own path. And the quality of the teachers was just amazing. They were brilliant people, they were accomplished people, they loved teaching. They were just down-to-earth, great teachers.”

Early in this century, a new hobby at middle age — learning to play the guitar — and a family connection — his brother’s friendship with Rock & Roll Hall of Fame guitarist Dave Mason — led Sawhney’s firm down a stunning, rockin’ path that landed him on the cover of Businessweek in 2005 for “Best Product Design” and reimagining the design of the electric guitar with his new venture, RKS Guitars.

After creating about 2,000 guitars for the likes of the Rolling Stones and The Who, RKS Guitars ceased production in 2006 to return to more of RKS’ original foci. The design firm is still heavily connected to the music industry, however, especially in L.A. They’re busy perfecting the electric guitar stand and many other accessories for musicians — who are some of Sawhney’s favorite collaborators.

Sawhney seems to be busier than ever. Six of his firm’s recent design projects will be featured on a new FOX show, “California by Design: Innovations,” premiering April 5.

“We’ve earned a level of humble respect,” Sawhney reflected. “We’re not big headed — the whole team is very focused on the work, focused on the client and the people they serve. It’s all about them, the people. If you love the work and the process — that’s why you get into this: the art of creation.”