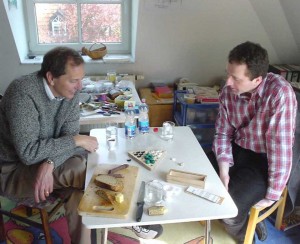 Computer science professor Richard Lorentz takes his games seriously. But you won’t find him glued to a PlayStation or engrossed in the latest version of The Sims. In Lorentz’s world, games are a great way to test computer algorithms. As the College of Engineering and Computer Science’s 2011–12 research fellow, he’s studying the merits of different algorithms in computerized versions of board games.

Specifically, his research focuses on algorithms called minimax and the more recently discovered Monte Carlo tree search (MCTS), in an ongoing quest to understand why the latter works so well.

“MCTS has revolutionized a lot of games,” Lorentz, who’s been teaching at Cal State Northridge for 25 years, said. Lorentz has been studying variations of the MCTS algorithm, and his Amazons program, a blend of minimax and MCTS, is the current world champion.

Expanding his investigation to additional games, Lorentz works in collaboration with students who learn the algorithms and how to implement them efficiently and to modify them for the task at hand—skills they can adapt to the workplace whenever they need to implement an algorithm with which they are unfamiliar