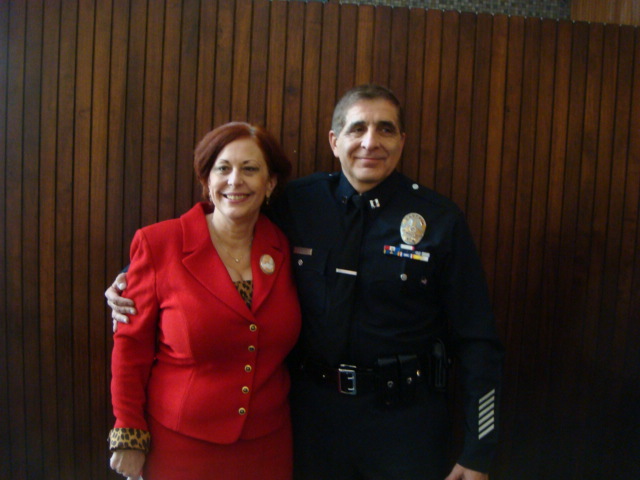 Chris Zingo established a scholarship in honor of her late husband Nick Zingo, a retired Los Angeles Police Department captain and professor in CSUN’s Department of Criminology and Justice Studies.

A $132,000 gift from Chris Zingo, wife of the late Nick Zingo, a retired Los Angeles Police Department captain and popular professor in CSUN’s Department of Criminology and Justice Studies, will establish an annual scholarship for students pursuing careers in public service, including law enforcement.

“We are humbled by this gift to CSUN and thank Chris Zingo for helping to secure a future of academic excellence for our students,” said CSUN President Erika D. Beck. “With its emphasis on the justice in criminal justice, CSUN’s Department of Criminology and Justice Studies is at the forefront of developing future leaders who are community-minded and community-connected. I can think of no better example of community connection than the annual Nick Zingo Criminology and Justice Studies Scholarship, an everlasting tribute to a man who gave so much to Los Angeles and to CSUN.”

Nick Zingo, who retired from LAPD in 2013 and joined CSUN’s Department of Criminology and Justice Studies when it was formed in 2017, passed away July 8, 2020.

In establishing the scholarship endowment that bears Nick’s name, Chris Zingo said she wanted to honor her late husband’s love of teaching. “I wanted to give back to the community, give back to the students and recognize Nick for everything he did over the years,” she said.

With policing and police reform in the national dialogue, the gift is especially meaningful, according to Vickie Jensen, professor and chair of Criminology and Justice Studies. The department serves a diverse student population, many of whom pursue careers with local law enforcement agencies, she said.

“This award can mean the difference in a student finishing their college degree, or graduating early so they can start earning money,” said Jensen. “Additionally, a college degree makes a huge difference in the field of law enforcement. Critical thinking, writing — all of these things translate to better policing.”

Vanessa Contreras, a rising senior majoring in Criminology and Justice Studies, received the inaugural $1,000 Zingo scholarship at the end of the Spring 2021 semester.

“Being the first recipient meant a lot to me because I had Nick Zingo as a professor before he passed away,” Contreras said. “He made a really big impact on me. He saw how much I was trying in class. He always encouraged me to be more confident, and he motivated me to do better.”

The 21-year-old Canoga Park resident said she plans to pursue a career helping juveniles in the criminal justice system. “I want to make a difference and provide them with the support and resources so they can rehabilitate into society,” she added.

Jensen said Nick Zingo was a dedicated and admired lecturer in her department. He had been a commander on the day of the infamous North Hollywood bank shootout in 1997, earning him respect around the country. But when he retired from the police department, he turned to academia, teaching at Palomar College, Moorpark College and CSUN.

“Here is a guy who could have just enjoyed his retirement, but he was completely and utterly invested in his teaching,” Jensen said.

Chris Zingo confirmed that her late husband’s love for pedagogy led her to establish the scholarship. “He loved teaching,” she said. “Even back in the police department he was always doing some kind of training or education for his officers.”

As a CSUN professor, Nick Zingo was popular with students like Contreras for what he called “active learning.” He wanted all his students taking part in discussions, even online.

“He was always willing to have uncomfortable conversations with students,” Contreras said. “Whether it was about the pandemic or mass shootings, or issues in the criminal justice system, he always reminded us that we are the ones who are supposed to help aid in fixing the system. He was very motivational.”

“He loved the interaction with his students,” Chris Zingo said. “He wanted students to participate and interact. The students reacted positively to that. He also had a lot of guest lecturers come in from different organizations to highlight different facets of the criminal justice system.”

Jensen said the loss of Nick Zingo is immeasurable, and that her department was looking to honor him in some way, and his wife’s gift made it possible. “Now, every year, we can celebrate students who want to go into public service,” Jensen said. “In a way, Nick still gets to be with us at the awards ceremony — and Chris made that happen.”

A retired nurse, Chris Zingo encouraged all CSUN students to consider careers in public service. “As a nurse, you really have a feeling of gratitude in a field where you are giving back to the community. The same is true for policing. It is a very rewarding career.”

Jensen agreed: “We hope to motivate students to follow the inspiring lead Nick established in his career, both in the LAPD and at CSUN.”