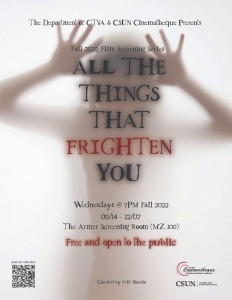 After a more than two-year hiatus due to the COVID-19 pandemic, , CSUN Cinematheque, offered by California State University, Northridge’s Department of Cinema and Television Arts, returns this fall with a film series featuring “All Things That Frighten You.”

This semester’s Cinematheque will offer free screenings of a new horror film every Wednesday at 7 p.m. in CSUN’s Elaine and Alan Armer Screening Room, room 100, in Manzanita Hall. Manzanita Hall is located near the southwest corner of the campus near Nordhoff Street and Darby Avenue.

“Fear is one of the most basic human emotions,” said Erik Boccio, assistant professor of cinema and television arts, and curator of this semester’s Cinematheque series. “While some may avoid the topic, so many people are fascinated by fear — which explains why horror is so popular in films, books, music, graphic novels, artwork, and video games. Horror, just like cinema, is an escape”.

Boccio’s selection of these movies is intended to showcase the history of the genre, while highlighting the theme “All Things That Frighten You.”

“Narrowing down the films to a slate of 13 was very challenging considering I began with a list of well over two dozen,” he said. “My intention was to include something for everyone with an interest or curiosity in the macabre. The series covers a variety of topics including mental health, substance abuse, racism, sex, possession, cults and a few blood-suckers for good measure .”

Boccio said attempted to choose films that horror lovers and fanatics would truly appreciate, while taking into consideration that many people have not had the opportunity to watch them anywhere other than their home. Cinematheque gives audiences a chance to see paradigm horror films on a big screen, the way the filmmakers intended.

For more information about the Cinematheque series, visit https://www.csun.edu/mike-curb-arts-media-communication/cinema-television-arts/cinematheque-schedule.