Look familiar? Lizzo filmed the entirety of her music video “About Damn Time” at CSUN in just one night. Joining the ranks of iconic productions like “Star Trek,” “Criminal Minds,” and “The Office,” R&B superstar and producer Lizzo also discovered the charms of CSUN’s campus.

On March 26 and 27, Lizzo came to CSUN to film her video in a single overnight shoot. Using several campus locations, including Redwood Hall, the Extended Learning Commons and other facilities as set, “About Damn Time” illustrates a process of mental and emotional healing and empowerment. Lizzo is a modern icon of self-love and confidence, and she expresses these messages through her music as she dances through Redwood Hall — including The Matadome lobby (now Premier America Credit Union Arena), and the varsity locker rooms — and plays her flute (an instrument that’s a celebrity in and of itself) in the Matador Large Pool, home “turf” for CSUN Women’s Water Polo. Lizzo’s production team lit up CSUN’s campus and turnsed the hallways of Redwood Hall into a fabulous disco.

Chair of the Department of Cinema and Television Arts, Jared Rappaport, explained how locations for filming are often selected based on appearance and convenience. “For instance, our library has a distinct look and is easily accessible, and has been used often as a location. I know The Soraya performing arts center is often used as well, again because it’s a striking building,” Rappaport said. 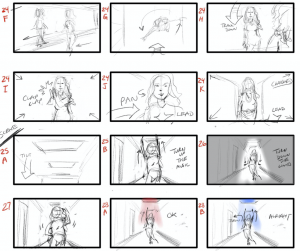 Original storyboard presented to CSUN prior to filming

Traveling through CSUN’s expansive, parklike campus, you’d never know how many celebrities and luminaries have walked those same paths and entered those same buildings. (Beyond pop culture, in its six-plus decades, the campus has welcomed the likes of Maya Angelou, Dolores Huerta, Janis Joplin and Sen. Robert Kennedy.)

According to Heather Cairns, CSUN’s director of University Licensing and Facilities, “CSUN is a popular film location not only due to its proximity to Hollywood, but also because it’s very film friendly. The campus is responsive and supportive of this type of business. We’re able to coordinate projects in such a manner that they don’t disrupt university business. We find that the campus community enjoys seeing these activities happen on campus. The revenue generated from campus filming (after all direct costs are covered) goes back to CSUN.” CSUN is proud to be a filming site, especially for artists who perpetuate and support the campus’ message of self-empowerment and diversity.

Visit the CSUN Today news blog and our CSUN Magazine archives for more on famous (and not-so-famous) videos, films, TV shows and commercials set on the CSUN campus.