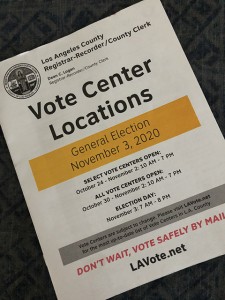 Young voters in the United States seem to be more committed than ever to exercising their right to vote and making their voices heard.

According to a study conducted by the Institute for Democracy and Higher Education — creators of the National Study of Learning, Voting and Engagement, the nation’s largest study of college and university student voting — students across the nation participated in record-breaking numbers in the 2020 ​​presidential elections, with voter turnout jumping to 66%, a 14-percentage point increase from the 52% turnout in the 2016 election.

The 2020 election saw a record number of votes cast across the nation — including the highest percentage of eligible voters since 1900 — fueled in part by expanded mail-in voting and early voting to ease crowds during the COVID-19 pandemic.

CSUN’s voting rate, the percentage of eligible students who voted on Election Day, is proof of this phenomenon, boasting a 73.2% voting rate, a 17.8% increase from the 2016 election.

“That students, often younger and first-time voters, turned out at rates commensurate with the general public is nothing short of stunning,” said Institute for Democracy and Higher Education Director Nancy Thomas, on the national trend of higher voter turnout among college and university students. “We attribute this high level of participation to many factors, including student activism on issues such as racial injustice, global climate change and voter suppression, as well as increased efforts by educators to reach students and connect them to the issues and to voting resources.”

A clear example of this commitment is the CSUN Act Now initiative, focused on increasing civic engagement among the campus community. The team is a collaboration between students, faculty, staff and community members that come together and organize different activities to help Matadors make informed decisions and participate meaningfully in their communities.

Just in fall 2020, CSUN Act Now sponsored or co-sponsored 29 virtual events focused on educating, inspiring and empowering students, faculty, staff and community members to contribute to civil discourse and debate that is meaningful, constructive and respectful of individual differences and perspectives.

“The CSUN Act Now team works together to energize and increase CSUN voter participation and engagement,” said Julia Heinen, interim director of Community Engagement. “We want our students and graduates to become civically minded participants and leaders in our democracy, and voting is truly the cornerstone of our political system.” 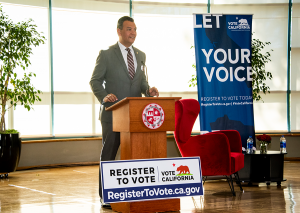 In addition to the initiative, CSUN held multiple events focused on encouraging voter participation. For example, CSUN’s Associated Students, in collaboration with the Office of Government and Community Relations, hosted a forum with California Secretary of State Alex Padilla (now a U.S. senator) to answer students’ questions about voter registration and the 2020 election.

Another important event was “Your vote DOES matter,” hosted by the Department of Africana Studies, which featured prominent guest speakers such as state Sen. Steven Bradford and civil rights activist Donzaleigh Abernathy, daughter of the late civil rights leader Rev. Ralph D. Abernathy. The guest speakers discussed the civil rights era and connected it to the importance of voting today, especially for young African American voters.

Following the 2020 election, Republicans in dozens of states have pushed for or passed laws that make it harder to vote, which include stricter ID laws to reduce access to early and mail-in voting.

In California, government officials have created multiple initiatives to encourage voting, including automatic voter registration at DMV offices, extended voter registration through election day, and the decision to mail a ballot to every registered voter during the pandemic, according to the Los Angeles Times.

This last initiative proved to be pivotal, with almost 87% of the state’s votes in 2020 being cast outside polling places and voting centers. Due to this success, state leaders are considering keeping the mail-in ballot option for all registered voters in future elections — to maintain high voter turnout rates, and to make it easier for minority groups to exercise their right to vote.