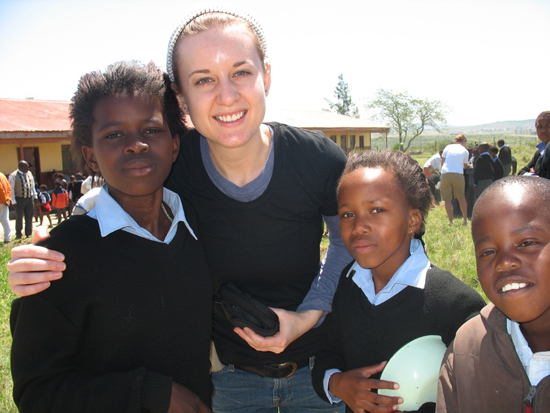 Naomi Carrington, one of CSUN’s Fulbright U.S. student scholars, was inspired to return to Africa after a 2009 visit to South Africa.

The United States Department of State’s Bureau of Educational and Cultural Affairs (ECA) administers the Fulbright Program under policy guidelines established by the J. William Fulbright Foreign Scholarship Board (FFSB) and in cooperation with bi-national Fulbright Commissions and the public affairs sections of U.S. embassies abroad.

Cal State Northridge has had more than 50 faculty and student Fulbrighters since 1980 including six students enrolled full-time or in a special program, according to records.

“CSUN encourages all undergraduate and graduate students to consider and participate in this prestigious program to advance their understanding of other cultures and to further their study and research endeavors,” said Marta Lopez, CSUN’s assistant director of international programs. “(Fulbright) contributes to the internationalization of the campus through promoting international understanding and cultures.”

As a recipient of the 2013 Fulbright Award for English Teaching Assistant, Carrington will be able to take her passion for teaching to Rwanda. The English teaching assistantship allows a Fulbright recipient to teach in a classroom abroad to provide assistance to English teachers working with non-native English-speakers while serving as a cultural ambassador for U.S. culture.

Carrington’s choice to work in Africa was inspired by a 2009 church trip she took to the eastern cape of South Africa, where her group did educational outreach, refurbished schools and visited orphaned children. She works with the literacy program Books for Africa and has organized several campus book drives for the cause.

“The Fulbright is about international educational exchange, which means my goal is to not only teach English, but also be influenced by other cultures and communities,” Carrington said. “As such, I know that the Rwandan culture, something so different from my own, will influence and grow me in many ways that I have yet to discover.”

In addition to teaching at a university and assisting lecturers with their research, Carrington plans to work with Rwandan teachers in developing lesson plans and to possibly partner with One Laptop Per Child, a nonprofit organization. Carrington has been accepted in a doctoral program in rhetoric and composition at the University of Texas, El Paso.

Olson is a California State University, Long Beach graduate who holds a bachelor’s in Spanish with a focus on judicial translation and interpretation. He recently completed the two-year Russian Language and Culture Immersion program at Cal State Northridge. The program provides highly motivated students with an opportunity to quickly acquire and/or improve proficiency in Russian and learn about contemporary Russian culture, influence and politics.

As a Fulbrighter, he will live, work, meet and learn from the people of Russia. The goal of this direct interaction is for the grantee to gain an appreciation of another culture.

“It is wonderful to know that the SLI experience has helped Alex Olson receive this award and advance in his future,” said Dina Mokhnatkin, the director of CSUN’s Russian Language and Culture Immersion program.

While at CSUN, Olson worked on a project he titled “The Mysterious Russian Soul: An Attempt at Defining the Indefinable.” He lived in Moscow for one semester and worked with a professor from the Russian State University for the Humanities.

Tata also completed the CSUN Russian program and will be journeying to Ukraine for her work. She applied to Fulbright through Wheaton College in Massachusetts.

Her research topic is “Identity, Language Policy, and the Russian Minority Community in Ukraine.”

“My research will focus on the contents and controversy surrounding the language policy and the attitudes of the ethnic Russian community toward the question of Ukrainian identity,” Tata said. “I am thankful … for the role that the CSUN Russian program played in my language training and Fulbright process.”