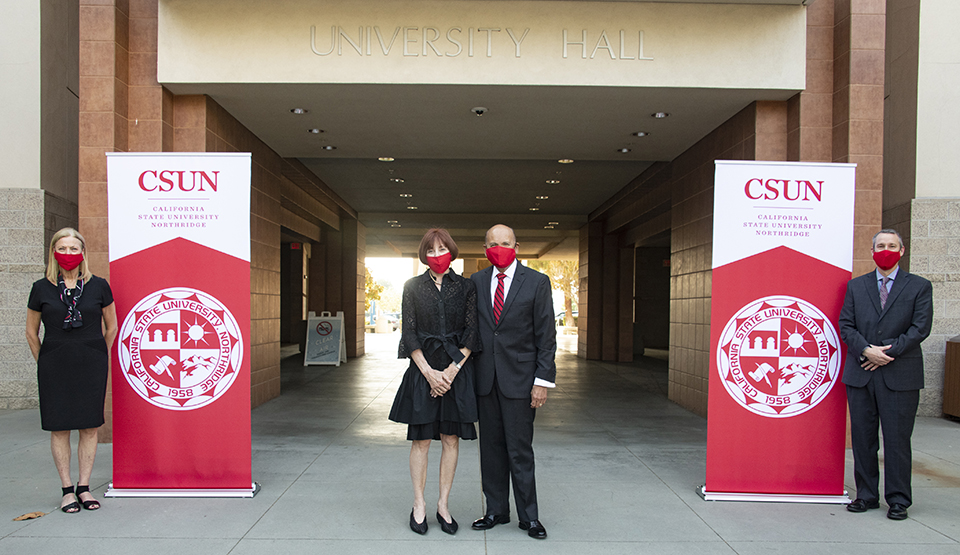 From left, CSUN President Dianne F. Harrison, Debbie Valera, Milt Valera and CSUN Vice President for University Relations and Advancement Robert D. Gunsalus in front of CSUN’s administration building, which the CSU Board Trustees today formally renamed Valera Hall in recognition of a more than $11 million gift the Valeras have made to the university. Photo by Lee Choo.

California State University, Northridge President Dianne F. Harrison announced the naming of the university’s administration building in honor of alumnus and notary pioneer Milt Valera and his wife, Debbie, who have committed more than $11 million for programs across the campus, particularly those that support students who have been part of the foster care system.

The Valeras’ gift creates an endowment and scholarship for CSUN’s EOP Resilient Scholars Program, which provides a safety net for college students who grew up in the foster care system, as well as scholarships and endowments in colleges across the campus, including an endowment for the Younes and Soraya Nazarian Center for the Performing Arts (The Soraya).

Today, the CSU Board of Trustees voted to name CSUN’s administration building, formerly known as University Hall, Valera Hall in recognition of the Valeras’ generosity to the campus. 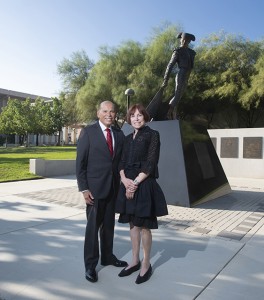 CSUN alumnus Milt Valera and his wife, Debbie, have committed more than $11 million for programs across the campus, particularly those that support students who have been part of the foster care system. Photo by Lee Choo.

“Milt and Debbie Valera are two of the most committed and passionate supporters of education that I have ever met,” CSUN President Dianne F. Harrison said. “I am delighted to celebrate this transformational gift that benefits so many areas of the university, particularly our Resilient Scholars. Milt and Debbie’s approach to CSUN is endless enthusiasm and endless commitment. This gift will make an indelible impact on generations of CSUN students.”

A longtime volunteer leader at his alma mater, Milt Valera has served on numerous CSUN-affiliated boards and advisory councils.

“Debbie and I feel fortunate to be able to make this gift to CSUN at this point in our lives,” he said. “We hope that our gesture can serve to motivate others to support CSUN and other CSU campuses. Education has always been an important part of our lives, and we are proud that our gift will be able to be put to good use at so many programs on CSUN’s campus.”

As executive director of the National Notary Foundation, Debbie Valera is a noted philanthropist and supporter of numerous causes.

“Using a word that is not taken lightly, it is indeed a privilege to be able to give to the university and provide for others what we have been so fortunate enough to have for ourselves,” she said.

In addition to the EOP Resilient Scholars Program and The Soraya, the Valeras’ gift supports scholarships and endowments in CSUN’s David Nazarian College of Business and Economics; Mike Curb College of Arts, Media, and Communication; the Oviatt Library; and the Michael D. Eisner College of Education, as well as an endowment for the university’s Jewish Studies Interdisciplinary Program in the College of Humanities.

“In a rarity for higher education, the Valeras’ generosity and philanthropic impact reach across every corner of the campus,” said CSUN Vice President for University Relations and Advancement and President of the CSUN Foundation Robert D. Gunsalus. “For more than three decades, they have tirelessly advocated on behalf of CSUN’s mission and have become dear friends of many across campus. Milt and Debbie are part of the growing number of Southern California philanthropists who see the elevating power of the university and know that, through CSUN, their investments will have an amplified positive effect on the region.”

“Our students face obstacles on a daily basis, and having the ability to remove some of them will have a great impact in our students’ lives,” Parsa said.

“Milt and Debbie Valera have been among The Soraya’s most committed supporters since it opened a decade ago,” said Thor Steingraber, executive director of The Soraya. “With their endowment for arts education and their regular underwriting of performances, Milt and Debbie have provided indispensable philanthropic leadership. That long-term support is now amplified with a visionary gift that provides for some of the most important needs as we look far into the future.

“It is fitting that The Soraya lobby will bear their name, as no one is more at home there than the Valeras and the many guests and friends they bring to performances,” Steingraber continued. “As executive director, I value their warm embrace of our many programs and the ways we serve the CSUN student body and community.”

Milt Valera was born and raised in Lihue, Hawaii, and he came to California for his college education. He enrolled first at Los Angeles City College, before matriculating to what was then San Fernando Valley State College, now CSUN, to study journalism. He graduated in 1968 and worked at two of Los Angeles’ metropolitan newspapers before forming his own public relations and marketing agency. That same year, Valera closed up shop on the agency and began working exclusively for the National Notary Association (NNA), handling its marketing and communications. In 1982, he became the association’s president and CEO.

Valera was an instrumental figure in the association’s growth. The NNA is the leading authority on the American notary office — serving hundreds of thousands of customers annually. In more than 50 years with the NNA, Valera has overseen all of the major programs that now define the arena of notary education and support services. He has written standards that have better unified the industry and has consulted with state governors and legislators on notary best practices. Among his achievements is the creation of influential landmark sets of standards: The Model Notary Act and The Uniform Notary Act. He also is the founding editor and publisher of The National Notary magazine and the Notary Bulletin newsletter.

Debbie Valera, like her husband, has been a key player in the growth and development of the NNA for more than three decades. Her service as the organization’s executive director spanned 23 years before she became vice chairman and executive vice president. She represented the NNA on several state task forces and was active in the research and formulation of The Model Notary Act and The Notary Public Code of Professional Responsibility. As executive director of the National Notary Foundation since its founding in 1997, Debbie Valera has been key in the awarding of dozens of college and university scholarships and thousands of dollars being awarded to institutions throughout the country. Prior to joining the NNA, Debbie Valera was a reporter and editor at newspapers in Pennsylvania, where she was born, and Los Angeles. She holds bachelor’s degrees in English and journalism from Syracuse University.

The Valeras are longtime supporters of CSUN and education. They are members of CSUN’s President’s Associates and Heritage Society, as well as champions of the university’s Department of Journalism, The Soraya, the library and numerous other programs. They also sponsor several university scholarships and endowments.

Milt Valera serves on boards of the CSUN Foundation, The Soraya, the Curb College, the Nazarian College, the Alumni Association and the Campaign Leadership Committee. He was the founding national chair of the President’s Associates. He has been recognized over the years for his activities on campus. In 2011, he received the Dorothea “Granny” Heitz Award for Outstanding Volunteer Leadership and, in 2019, he was recognized with the university’s Distinguished Alumni Award.