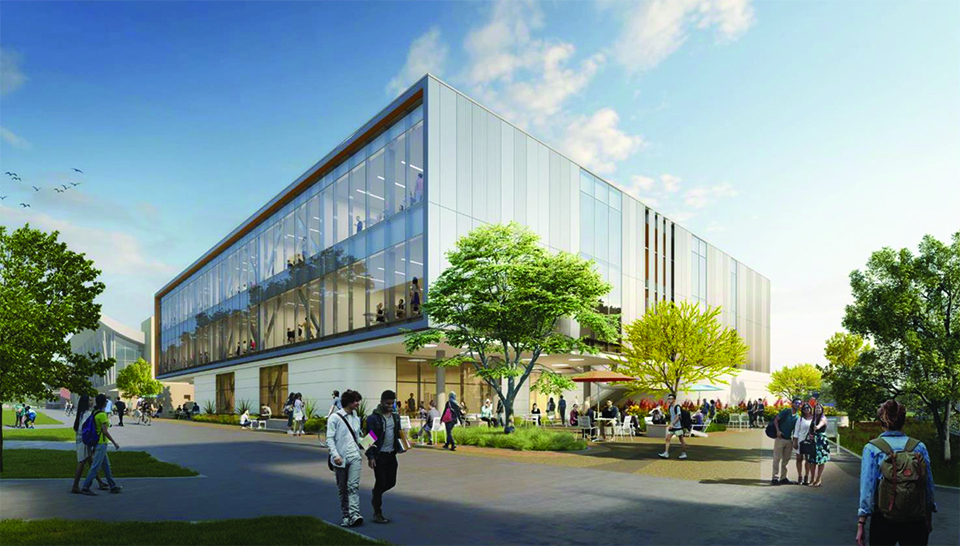 Architect’s rendering of the planned Sierra Annex, at the corner of Sierra Walk and Etiwanda Avenue (West University Drive).

Since first opening its doors in 1963, Sierra Hall has welcomed tens of thousands of CSUN students to learn in its classrooms, bond in its hallways and work toward their degrees. As one of the university’s oldest and largest academic buildings, Sierra Hall has been home to generations of student dreams, challenges and successes — from geography and anthropology to business and political science. Next year, the grand dame of CSUN will finally get a little sister, as the university breaks ground on Sierra Annex, replete with classrooms and lecture halls for a new era.

With architectural firm Gensler and construction firm Gilbane, CSUN plans to break ground on the new 40,145-square-foot Sierra Annex in spring 2022 on land immediately south of Sierra Hall (adjacent to Manzanita Hall and across West University Drive from parking structure B-3). Completion and opening of the new building are planned for the start of the fall 2023 semester.

Sierra Annex will be the first new academic classroom building opened since Chaparral Hall, home to the Department of Biology, in 2009, said Diane Stephens, associate vice president for academic resources and planning.

­­The annex will add much-needed classrooms and lecture halls — including a 3,050-square-foot lecture hall, two smaller lecture halls and four seminar rooms — with flexible seating, the latest audiovisual (AV) equipment and energy-efficient design to the west side of campus, one of the university’s busiest areas. The $49.9 million project is financed by CSU state funds.

“We’re truly building a modern academic building in all ways, from the pedagogy — how teaching and learning will happen in it — to the materials that will be used in the building. It’s a really creative design for the site,” said Ken Rosenthal, associate vice president of facilities development and operations. “The building is set up for the most flexible learning environments. All of the rooms will be larger in size than our normal classrooms, to allow the classes to reconfigure the furniture for breakout sessions, which you can’t do in Sierra Hall.

“We paid particular attention to building in student collaboration spaces into the lobby, the corridors, the waiting areas — we built in seating, so students aren’t sitting on the floor,” Rosenthal said. “These are inspirational rooms. They’re daylit, they’re flexible, they have the latest AV.”

The Sierra Annex’s opening also will clear the way for the renovation of her older sister, Sierra Hall — as classes there are shifted to the new building — with Sierra Hall renovation estimated to begin in 2025, Rosenthal said.

“As a building with general-purpose classrooms, all colleges may use the new rooms,” Rosenthal said. “It takes all the [Sierra Hall] classrooms and frees them up to be used as ‘swing space.’ … We will be studying options for Sierra Hall renovations. Faculty offices, laboratories and administrative offices will remain in Sierra Hall.”

Gensler and Gilbane are familiar partners for CSUN, having designed and built the campus’ Sustainability Center in 2017, the first of its kind in the CSU, and recently completed CSUN’s Orchard Conference Center adjacent to the Campus Store.

“Sierra Hall has a lot of interior, dark classrooms — it’s a very 1960s classroom building,” she said. “So, this new building is very mindful of the wellness of students and faculty. The ability to have natural light in the space makes it warmer and more welcoming. I think it’s going to end up being an iconic building.”

Stephens, an alumna, has her own memorable history with Sierra Hall.

“I met my husband, Michael ’93 (Computer Science), in Sierra Hall, 41 years ago!” said Stephens ’90 (Organizational Systems Management), MBA ’08. “We were in calculus class, in the fall of 1980. A mutual acquaintance invited us to go to breakfast at the cafeteria that used to be on the roof. I tell students, ‘See, you might meet your future spouse in this building!’”

Stephens said she’s excited for the opportunities Sierra Hall’s renovation will provide the university in the future — and all that the Sierra Annex will bring to the campus.

“I don’t know that we’ve ever built a strictly classroom building, so it really gives us a great asset for the campus,” she said. “I’m so excited to see this happen, that the next generations of our students and faculty will have the chance to experience these fantastic spaces.” 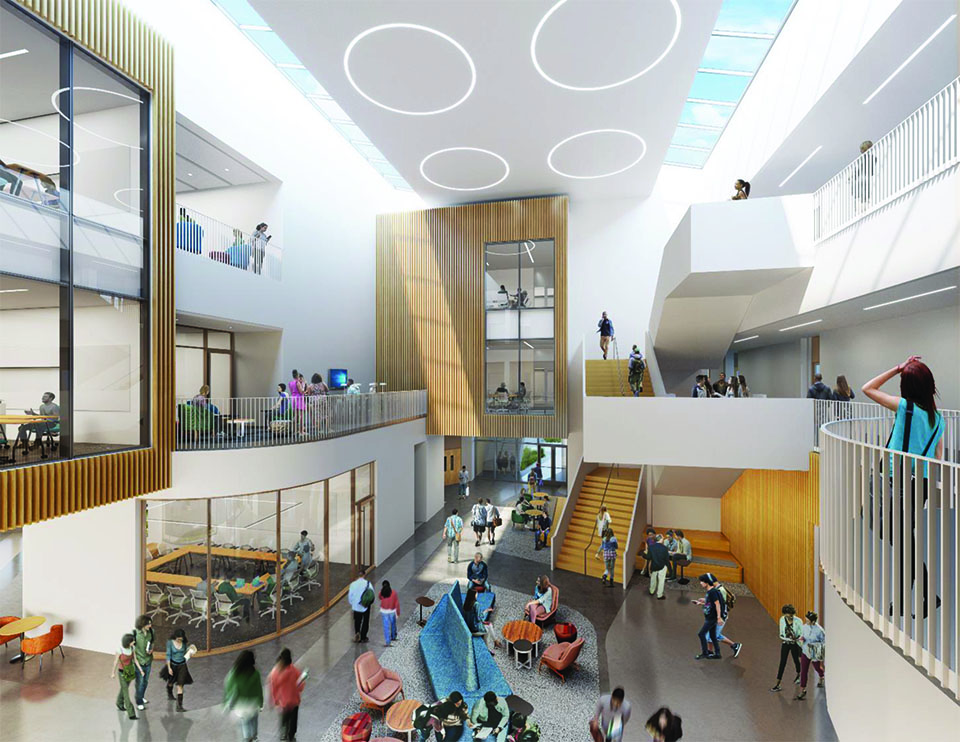 Architect’s rendering of the atrium of the planned Sierra Annex, scheduled to open in fall 2023.